What I found at Wondercon

It’s been quiet on the blog this week because Scott and I snuck away to Anaheim for Wondercon on Saturday, and then my parents and niece were visiting from Colorado. Good times were had by all, as usual.

Because we were only at the con for a day, I didn’t hit a slew of panels as is my usual con practice, and I spent far less time combing the hall for intriguing new finds than I usually do. But I did spy one item that made my heart go pitty-pat.

The work of artist David DePasquale caught my eye from several booths away—a gorgeous Peter and the Wolf print prominently displayed behind his table—and I drifted over for a closer look. I loved his work, loved it, began poring over the many prints he was offering for sale, deciding that if the price was reasonable, I’d bring one home for our walls. Possibly the aforementioned Peter and the Wolf, or one of several other delightful pieces that caught my eye.

And then—well, you’ll understand my gasp of delight. I didn’t just find a print, I found my print. 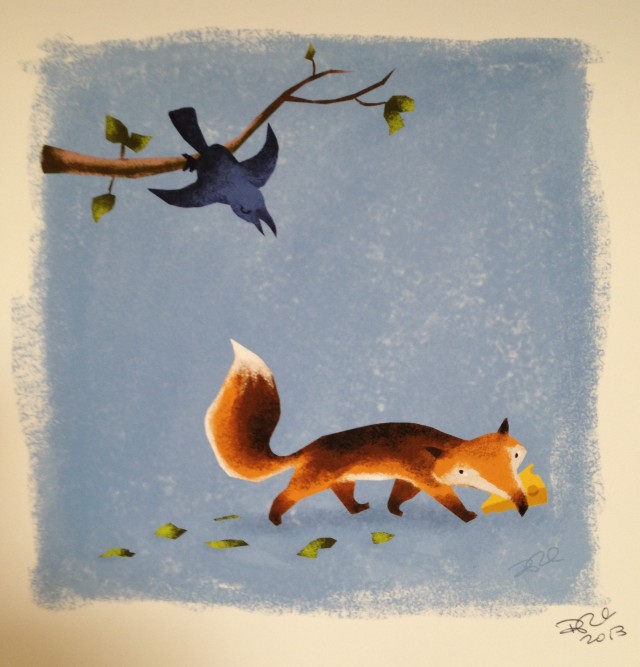 “Fox and Crow” by David DePasquale

He was amused by my excited reaction. I showed him the cover of my book. Lovely conversation. This is why I go to cons.

Can’t wait to hang this print on my wall.

I had a wonderful time. Dunno if/when I’ll have a minute to write about it; lots on my plate this week. But the nutshell version is: as always, the best part of a conference is catching up with friends, and this conference was particularly excellent in that regard.

Tanita Davis, I met your editor and we raved to each other about how awesome you are. Anne Marie Pace, your agent, ditto. 🙂

Allison Tran of the Authors are ROCKSTARS podcast was kind enough to request an interview , and she and her guest host, Lalitha Nataraj (filling in for Allison’s co-host Michelle), asked really excellent questions about my new books, my Little House books, my social media junkieism, my Betsy-Tacy junkieism, and the challenge of juggling mom/writer/blogger hats. (Hint: It really helps to have a husband who does all the laundry.) I had a ball. Talked way too much, no doubt. The podcast will run sometime in July, I believe—I’ll post a link when it goes up! Thanks again, Allison and Lalitha—our chat was one of the highlights of my weekend.

Of course there’s never enough time to do everything you want to—especially hang out with your librarian friends, for whom the American Library Association conventions are actually, you know, filled with WORK. Presentations and meetings and panels and whatnot. But I’m grateful for the hours I got to spend gabbing away with some of the funniest, smartest, thinkingest people in the books world. Thank goodness for the internet, is all I can say about having to part with them.

Pardon my dust over the next few days—we’re rolling out some long overdue changes to the site, and I’m sure I’ll be tinkering and tweaking in the weeks to come. Lots of photos to resize, things like that. Bear with me! 🙂

You already know I’m a geek and a mom.

Now I am also a GeekMom.

I’m delighted to say I’ve been invited to contribute to one of my favorite spots on the web. (I’m sure that bonnet photo had nothing to do with it.)

I’ll be sharing my San Diego Comic-Con experience over there in July. Here’s my first post, in which I contemplate the fact that the con is less than two months away.

If you have any thoughts about what kind of Comic-Con coverage you would enjoy seeing, I’d love it if you’d leave me a comment over there!

The bonnet side view, since you asked:

The light wasn’t great, so the ribbon looks washed out; it’s such a pretty blue with wheat stalks on it. The hatmaker said he has a special fondness for any ribbon depicting wheat or rye.

That batwing plait around the edges is to swoon for, isn’t it?

We found out about the steampunk/Victoriana con by chance: a Facebook friend mentioned it Saturday morning. So quick on the uptake am I that I at first interpreted “in SD” to mean in South Dakota and had a moment of “aw, too bad, I would love to go to something like that.” Then it dawned on me that my friend who lives in San Diego was probably posting about an event in, go figure, San Diego.

I mentioned it to Scott and he agreed that it sounded like a perfect mother-daughter Mother’s Day adventure. He stayed home with the little ones, which was part of my present. We arrived too late to sign up for the Mother’s Day Ice Cream Social, but as it happened, after we tore ourselves away from the tempting vendor hall and were headed toward the bits-and-bobs room, we encountered a Victorian gentleman bearing a box of slightly melty ice-cream bars: leftovers from the social which he was quite desperate to unload on sweet-toothed passersby. This made Rose and Beanie very happy.

The high point for Jane was meeting Kaja Foglio, co-author and illustrator of the Genius Girl comics (which have won numerous awards and look wonderful)—and discovering that her son was the model for a character in Aaron Williams’s PS238 series, which all my girls adore. Scott was Aaron’s editor on North 40. I love it when our worlds converge this way.

Tags: conventions, I am trying to take a picture every day, Steampunk

What I did for Mother’s Day

The mechanical butterflies were on display among many other marvels in the Curiosities and Inventions room at the Gaslight Gathering, a Steampunk and Victoriana convention the girls and I attended this afternoon. Loads of fun: the costumes were every bit as fabulous as one would hope. We’re determined to have our own garb for next year’s gathering.

My hastily snapped photos don’t do these outfits justice. They were spectacular.

Even better than the clothing were the gizmos, trinkets, and wondrous creations. We sighed over cunning little pocketwatches and brooches, gear-necklaces and carved bone bracelets. We admired a very fine propeller-chair to be used for in-flight repair of dirigibles and peeked in at a make-your-own-carpetbag workshop.

My favorite part was a long chat with a maker of straw hats. He comes from a family of “strawbenders” and had a booth filled with the most gorgeous boaters, bonnets, and bicycle hats. It is possible that one of us succumbed, under extreme pressure from her daughters, and treated herself to a delectable blue bonnet trimmed with brown batwing plait. But I’m not naming names.

It’s a week after Comic-Con and I’m still working through my notes! Two more panels and another booklist to post, and then it’s likely to get quiet around here for a spell.

I scrawled a crazy amount of notes at the Once Upon a Time panel—six authors of epic fantasy discussing their craft—but the odds of my being able to translate the scrawl to English are slimmish, so never fear. This was a fascinating panel. (Hence the 12 pages of notes.) Have I mentioned I love hearing other writers talk about their work? Yeah.

The panelists, in order of seating: Brandon Sanderson, Brent Weeks, Lynn Flewelling, Megan Whalen Turner, Christopher Paolini, Patrick Rothfuss. The moderator: Maryelizabeth Hart of the awesome Mysterious Galaxy bookstore. She was great. They were all great.

Hart’s first question was about the everyman character vs. the larger-than-life superheroic character. In epic fantasy, with these sweeping adventures and grand-scale worldbuilding, does the main character also need to be larger than life? END_OF_DOCUMENT_TOKEN_TO_BE_REPLACED

But it wasn’t really a commercial. It was two intelligent and enthusiastic writers talking about the process of researching, writing, and organizing a complex work of nonfiction. END_OF_DOCUMENT_TOKEN_TO_BE_REPLACED