After my Saturday morning trip to Sagrada Familia, I returned to the hotel for lunch. Yes, it’s true. I went to a foreign country and ate in the same place for every single meal except one. What can I say? The food was free. And the strawberry-gum-flavored ice cream. Sure, we had to pick from the same three entrees for lunch and dinner each day. And the next day? Slight variations on the same three entrees from the day before. Also: if you should grow weary of the so-rare-it-glistens meat after three or four meals in row and dare to ask for your duck to be cooked WELL DONE this time, be warned that such a request will deeply offend the chef and when your duck is served, twenty minutes after the rest of your party is finished eating, you will stick your fork into the pleasingly char-browned surface and IT WILL BLEED ALL OVER YOUR PLATE. If you think I am exaggerating, ask Jock. He was sitting next to me and will testify that within seconds my asparagus was floating in a pool of blood. And boy was the waitress annoyed with me when she came to clear my plate and saw that I hadn’t eaten a single bite. The chef had labored hard to create such a masterful deception of cooked fowl.

But I digress. Eating at the hotel day after day wasn’t about the food; it was about the company. I may have mentioned once or twice that we really really enjoyed the people we were hanging out with. But by Saturday night, yes, Scott and I were ready to sample some other Spanish cuisine. Any cuisine. The Dunkin Coffee in the subway was starting to sound pretty appealing.

Our plan to slip away for a romantic dinner at the shore Friday night had been thwarted by the awards ceremony, but Saturday there was no mandatory loud music to listen to while nibbling appetizers and pretending we were having tapas. We got a recommendation from the lovely girl at the check-in desk and hopped a cab for the beach. And by “hopped a cab” I mean stood outside the hotel for 25 minutes wondering if any cabs, in fact, ever stopped there.

Finally, about five minutes after our reservation expired, one did.

I tried to take pictures out the cab window and wound up with a classy series of photos I like to call White Dots on Black, or Reverse Dice. Which is appropriate since the restaurant was down near a strip of casinos. 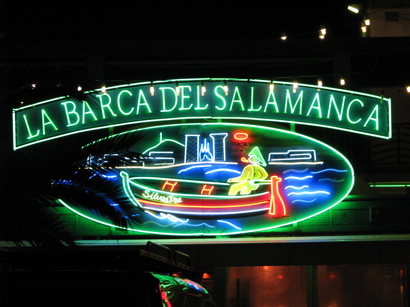 This was our restaurant. Even the name was romantic. Shall we sail away together on La Barca Del Salamanca by the light of the moon, the moon? 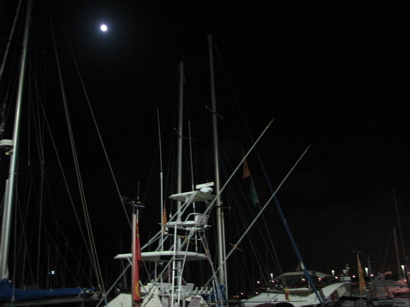 See, there really is a moon!

The restaurant door was hung with fairy lights, and really it was all too beautiful and goosebumpy for words. Boat, a moon, and the Mediterranean! We are people who order pizza once a week—at a minimum—so this was shaping up to be an incredibly special evening.

Under the fairy lights, past a quaint wooden screen—and we found ourselves in a school cafeteria.

That’s what it sounded like, at least. One big echoing room packed with people, and oh my goodness, the noise! Bright lights, tables squished so close together they formed long rows, like in a hospital cafeteria. Except hospital cafeterias don’t usually have cats running around, and we saw at least one tabby slinking in and out around people’s feet under the chairs.

We were seated next to a party of Irish holidaygoers, two young couples in Barcelona just for the weekend. And by “seated next to” I mean I was bumping elbows with Connor the accountant from Galway. “We’ll be old friends by the end of the night,” he said, and truer words nivver were spoken. (That’s a test to see how many of my readers have actually read my books. Ha!)

Scott and I had come to this restaurant in search of a good paella. And boy howdy did we find it. It was served in a skillet the size of my first car, loaded with shrimp and clams and scallops and calimari. We nearly killed ourselves trying to eat it all. I offered to share with Connor and Co., but they had filled up on the sea bass.

After dinner, the waiter plopped some bottles on the table alongside a platter of almond cake. “Invitation of the house,” he said, and we totally thought it was a treat because he liked us so much, but later we learned that many Catalonian restaurants serve free schnapps after the meal.

The schnapps was in a whisky bottle, and we were given shot glasses. I stuck with a few sips of the Manzana liqueur, which I thought tasted like melted green apple Jolly Ranchers (in other words, that’s my kind of drink!), and Connor called them “apple drops” which sounds so much cooler than Jolly Ranchers. Scott found himself enjoying Scotch for the first time in his life, before he found out it was in fact schnapps. Which explains how he was able to down so many shots. Did I mention we were drinking with Irishmen? There was much toasting to be done. Turns out the two women were sisters who grew up obsessed with Little House on the Prairie. We had much to talk about. Slainte!

Now, I’ve actually jumped right over half a day in this post, because there was another Gaudi expedition in between the raw duck and the paella. But that is for another post. And another day. My husband brought me home my favorite Haagen Dazs Dulce de Leche ice cream, and it is calling my name.

Or maybe that’s my two-year-old.