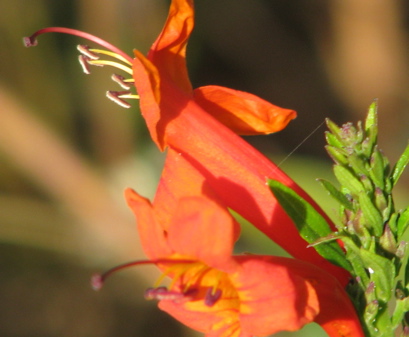 This is one of those weeks during which I filled up my drafts folder with fragments of posts but never had time to finish anything. We’re having such perfect weather here, perfect even by San Diego standards: brisk, not chilly, not hot. Glorious. I’ve been working on the garden again after neglecting it during the sweltering months. I love how a garden reinvents itself every couple of months. 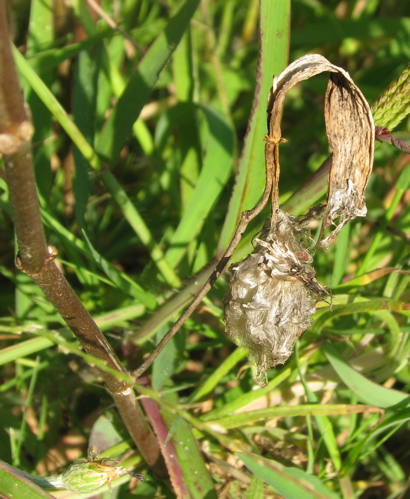 Looks like our last monarchs have left us for the winter. Early last week I counted four caterpillars and the usual flurry of butterflies. This week, none. The milkweed is stripped to the bone. The yard seems so still now, so hushed. This is an illusion, since the salvia is thick with bees (hooray!) and the finches and sparrows gossip all day long.

Our big backyard excitement this week was the sighting of a number of very small birds in the bushes. (The salvia and cape honeysuckle are bushes now.) They looked a lot like sparrows, but they were too small. Tiny little things! And they had gray backs, not brown. They weren’t juncos—too big, not gray all over. Going by size, I’d have said chickadees, but again, the coloring was all wrong. They startled up from the bushes to the back fence and then to the trees on the other side, chattering agitatedly. When I came out with a camera later, they were gone.

An inquiry on Twitter and Facebook resulted in an ID within minutes. (Thanks, Helen R.) Our little visitors were bushtits. This caused a flurry of hilarious comments on my Facebook page and I suppose it’s going to attract all manner of unsavory search engine traffic now, but this is a brand new bird for us: an exciting sighting.

I went out early this morning hoping they would return, but they have moved on. Our hummingbirds never leave us, though. This fellow kept buzzing my head when I was trying to get my camera to focus on the bees. 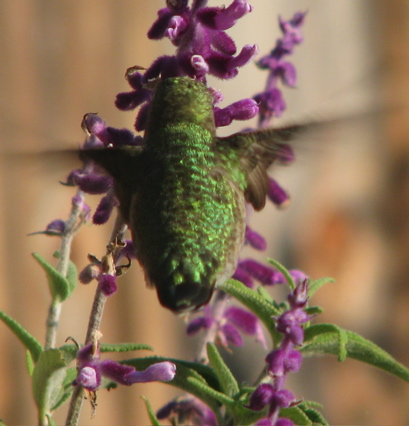 The other day we were about to prune the flowertips off the neglected basil when suddenly we spied another kind of visitor. He’s so cleverly colored it’s a wonder I didn’t prune off his head. 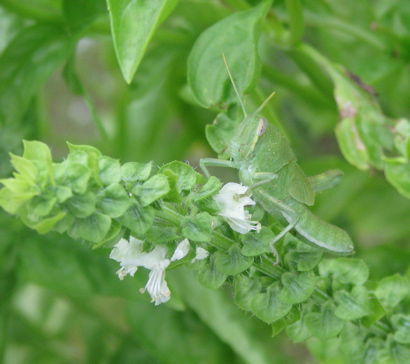 When we left Virginia (three years ago last week), I asked my friends Sarah and Lisa to dig up some of my flowers and move them to their yards. Our house hadn’t sold yet, and I had worked hard on my perennial bed and didn’t want my beloved posies to go to ruin while we waited (and waited, and waited) for a buyer. “You should especially grab the milkweed,” I urged, “and the asters.” Those asters were the stars of my autumn garden and their starry display had been the setting for a spectacular farewell party for ‘our’ butterflies the day before we rolled out of town. 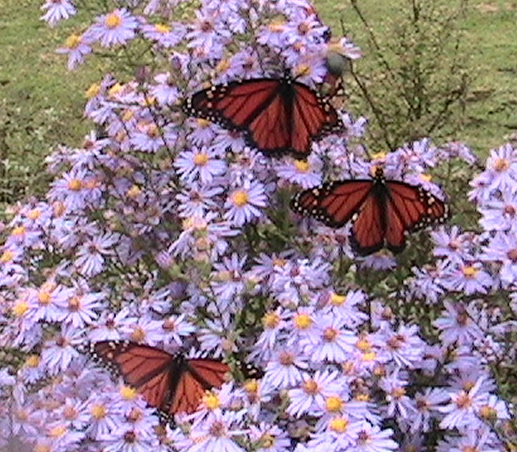 Now those asters and that milkweed live in Sarah’s yard a few blocks away, and every fall I watch for the photos of the monarch gathering. The time has come again. Our borrowed garden here in San Diego is a tangle of pink cosmos, blue salvia, and orange cape honeysuckle, and I can look upon my dear old asters in Sarah’s yard without the ache I felt the first couple of autumns. But oh how I ache for the dear friend herself, and those bonny lasses of hers! Thank goodness for blogs, during this season of little ones who make phone calls a near impossibility. 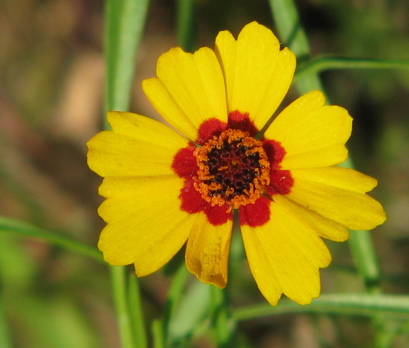