Look! For once it’s not a bee…

But what the heck IS it?? 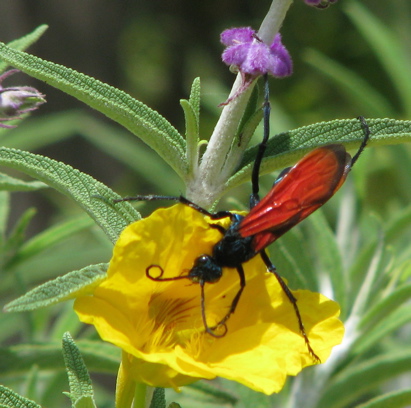 It flew over the fence, stopped for a brief sip, and zoomed off again. In this picture it has a kind of preying mantis shape, doesn’t it? Except for those copper-colored wings. Could those curly antennae be any cuter?

UPDATE: Dude!!! Tracy identified this beastie in the comments. It seems we have ourselves a (gulp) tarantula hawk wasp.

Tarantula hawk wasps are so named because they utilize live tarantulas as food for their growing young. Adult tarantula hawks are not carnivorous, but drink nectar just as honey bees do. But when a female tarantula hawk is ready to lay an egg, she must find a tarantula, sting it (with one of the most potent stings of any North American insect) and drag the paralyzed spider to its burrow, as shown in this photograph. The wasp will then lay a single egg on the spider, which will soon hatch into a maggot-like larva. The larva will feed on the still-living, but paralyzed tarantula for about a month. The adult wasp will emerge from the burrow the following season. Tarantula hawks may look intimidating, but are generally mild-mannered towards humans. Nonetheless, one should never attempt to pick up or molest a tarantula hawk as the sting is extraordinarily painful!

From the San Dieguito River Park website; thanks for that very helpful link, Tracy!

Now if you’ll excuse me, I have to go shudder.