Day in the Life 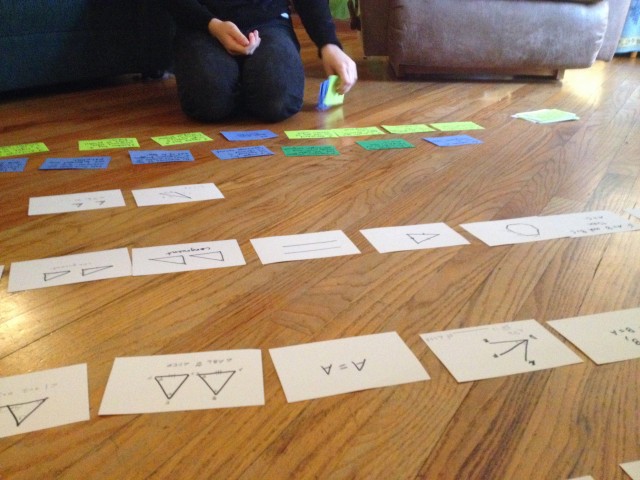 The weekend: Jane headed back to college, the rest of the kids succumbed one by one to a fairly-short-lived-but-obnoxious-in-the-short-term cold, and I cleaned house all day Saturday to avoid finishing my taxes. And then gardened all day Sunday to avoid same. Did not read much, in part because sitting still and doing something besides taxes was harder to justify than, say, scrubbing floors or mowing the lawn. I mean, I can’t possibly be faulted for procrastinating going through expense receipts when I’m washing walls, can I? You guys, I was even washing walls. My ability to be intensely industrious at all the wrong tasks is unparalleled.

Monday: all but one of the kids have kicked their cold. We’re still in high tide, have got a very groovy groove going, in fact. Rose, Beanie, and I are all enjoying the books we’re reading together, and Latin has been really fun lately. Also, it happened that the episode of Cosmos everyone watched the night before Jane left was all about Sir Isaac Newton, about whom we’ve been reading in The Story of Science. Extremely considerate of the show to time things so conveniently.

I’ve been getting some questions about scheduling lately, both from real-life friends and blog readers, and since I’ve completely dropped the ball on my separate homeschooling blog (if you’ve asked for the login info and I haven’t replied, it isn’t that you’re not welcome; it’s simply that I’ve dropped that ball too, and I haven’t posted there in weeks anyway so you aren’t missing a thing…but feel free to ping me again for the info!) maybe I can give a quick sketch here of a “typical day”—of course we all know there isn’t any such thing, really; they’re all a little different. But we do keep the same rough structure four days a week. The fifth day, which falls in the middle, is for piano lessons and errands and (for Beanie) volunteering at Wonderboy’s school.

6:30ish—the boys wake up, Scott turns on a show for them to watch.

7am—Scott and I get up (sometimes he’s up already). He fixes breakfast for the boys and cocoa for me, and I take my laptop to the couch where the lads are watching their show. Email, etc while I come alive.

7:35—supposed to be 7:30 but I always push it as long as possible. I get up to get dressed, put my contacts in, pack Wonderboy’s lunch. By now he has already gotten dressed and getting ready for school.

8am—I’m in my bathroom brushing my hair and I hear the first bell ring on the other side of our back fence. I jump into my shoes and walk WB around the corner just in time for school.

8:15 (is this too granular? LOL)—I’m back home and now Scott and I leave for our walk. Beanie and Rilla are by now up and dressed (well, Beanie’s dressed), finished with breakfast most likely, and the TV is off. Rose waits for us to leave before dragging herself out of bed. Usually someone is playing piano when we leave and someone else is playing when we get back.

8:45ish—the teens have done their morning chores, Scott and I are back home after our walk (we call it our daily staff meeting), and I grab a yogurt and Scott makes a cup of coffee and we drift to our separate computers to eat/drink/read.

9am sharp—Scott starts work, back in the boys’ bedroom, which doubles as his office during the day. Rilla will likely spend the next hour puttering through her morning chores, which are few and simple but easily interruptible, it seems. Huck is dressed and running around. Mostly he’s counting down the minutes until 9:30, when (after two rounds of breakfast) he gets a snack. Rose and Bean join me in the living room for our lesson time. Now, the sequence of the next 3 hours varies day by day, but here was today’s. 9:00, we started with Poetry. First Poetry 180, two poems today because after we’d read Roethke’s “The Bat” they saw what came next and remembered especially liking that one when we did a chunk of this series with Jane, a couple of years ago: Tom Wayman’s “Did I Miss Anything.” Then John Donne, Meditation XVII (No man is an island…), in our continuing exploration of the metaphysical poets.

9:30? more or less?—Story of Science, the Newton chapters continued. I read aloud, we discuss. 1666, “The Year of Wonders” (Dryden’s Annus Mirabilis designation for the year of the Great Fire, which later came to be applied by scientists to that same year when Newton developed his theory of gravitation, oh and invented calculus, oh and figured out about color and light—that little old year), is a perfect choice for one of our history cards. Have I talked about this here, or only on Facebook? It’s pretty much the most successful idea I’ve ever had, history-wise. We used to keep a giant timeline on one wall, but in this house there’s no perfect spot for it; it was up too high; we never added anything new. A couple of months (?) ago, on a whim, I grabbed index cards and started writing down events or people we’d been reading about, in all our various books. Science stuff, history, literature, music, art, anything I could think of that we’d recently discussed. Person or event on the front, the year on the back. We have had such fun with these cards! Once or twice a week we play a game with them—Rose likes the competition—where I hold up a card and the girls take turns calling out the date and arranging them in sequence. We’ve all nailed down a great many dates that were quite fuzzy even for me before. My original goal was simply to have them be able to identify events in rough sequence, and there were only a few major dates I said they had to absolutely memorize. But the game has hammered  nearly all the dates into our heads, mine included. And the cards themselves provide an excellent record of what we’ve studied, and how the different eras we’ve read about this year (19th century American history, Renaissance science, Elizabethan literature) fit together. We’ll be able to keep on adding to the stack: a game without end. Rose was pretty lukewarm on history before, and now she says she wants to minor in it at college.

Anyway, no cards today, I just got onto the subject because we remarked upon 1666 as an important year to make a card for.

All right, so now it’s around 10am, I think?—or a little before? I think next we did math. Beanie watched a MUS video and since Rose didn’t remember that bit, she watched too. By now Rilla and Huck are outside playing, having consumed their snack. Rose likes me to go over the new lessons with her, so we did that. She’s only got two more in this book (geometry), hurrah! (We made cards for geometry last week, too, since she has found them so useful for history. Wrote out all the postulates and properties, with matching cards containing examples. And one very cool thing was that after she’d spread them all out and matched them up, we realized she’d just done all of geometry right there. I mean, all of it that’s covered in this book. The last few lessons are a preview of trig. It was gratifying for her to see the scope of her accomplishment.)

Beanie didn’t need help with her math, so once Rose got on to working her problems, I went out to mow the front lawn. Beanie finished and practiced piano.

10:30—Rilla and Huck went in to get their half-hour on the iPad. I usually reserve this for when I’m reading with the older girls, but today I was still finishing the yard. Rose finished math and did some Memrise.

11am—littles are off iPad, back to playing. Rose downloaded a metronome she needs for a song she’s learning in 5/4 time, but I don’t think she had much time to practice before I called her for the next thing. (She plays for a good bit most afternoons while I’m working, though.) Beanie did 15 minutes of freewriting while I read through a lesson with Rose in an essay-writing book we’re going through. Then Rose went to do the exercise for that chapter while I looked over Beanie’s freewrite.

11:30.—Latin with all three girls. We’ve been using a different book for new vocab but right now we’re using the rather old Latin Book One for some real reading and translation practice. We’re all really enjoying this.

12pm.—Lunch. Huck begged to watch Ponyo. Generally we don’t do any TV or videos at this time of day, but he’s been on a real Ponyo kick lately and was still getting over that cold, so I said yes. He ate his lunch and then fell asleep on the couch, watching the movie. I sat on the front stoop with Rilla, doing a subtraction lesson. Then she went in to eat, and Rose was eating, and Beanie had already finished. Bean and I went into the backyard and dug out a dead plant, and talked about Romeo and Juliet, which she was about to begin reading.

12:30ish?—Somewhere in there, I ate my own lunch. Then Rose and I started Gulliver’s Travels. I gave a bit of background and we read the first chunk together. She’ll continue on her own, but she really likes doing things in tandem. Beanie was reading R&J by this time, and Rilla was doing magical Rilla things.

1:15pm—Rilla’s turn. She was itching to garden, because Mary Lennox. We weeded the front-yard flowerbed and found a snail. After about a half hour, we were both hot and thirsty. Went in for a drink and then read two chapters. Met Dickon! The roses are wick!

2:30—time to pick up Wonderboy. Rilla walked with me, Huck was just waking up. Got home, unpacked, Beanie was doing her afternoon tidy and Rose had the dishes ready. I wash, she rinses. Wonderboy and I chatted, and then he turned on Word Girl.

3pm—Scott came out, and it was time for me to go to work.

Things unusual about this day:

• the Ponyo viewing and Huck’s nap, which meant I didn’t read to him at all!

• gardening with Rilla and reading an extra chapter of Secret Garden meant I didn’t do any of my own reading, which I usually try to squeeze in during the last half hour before Wonderboy gets home. But then I never read as much in spring, do I?

• Most mornings, Rilla sets up camp at the kitchen table with all her drawing supplies while I’m reading to her sisters. She absorbs quite a lot of history and lit that way. 🙂 But today she was very busy with Huck all morning.

• No German for Beanie, and barely any piano time for Rose. Usually Rose is pounding away every time I turn around. She likes short bursts of practice throughout the day, whereas Beanie will sit down for one long concentrated session.

I imagine any day I picked for this exercise would have about the same number of (totally different) “things that are different about this day.” An orthodontist appointment, a Journey North meeting, a muddy little boy in need of a bath.