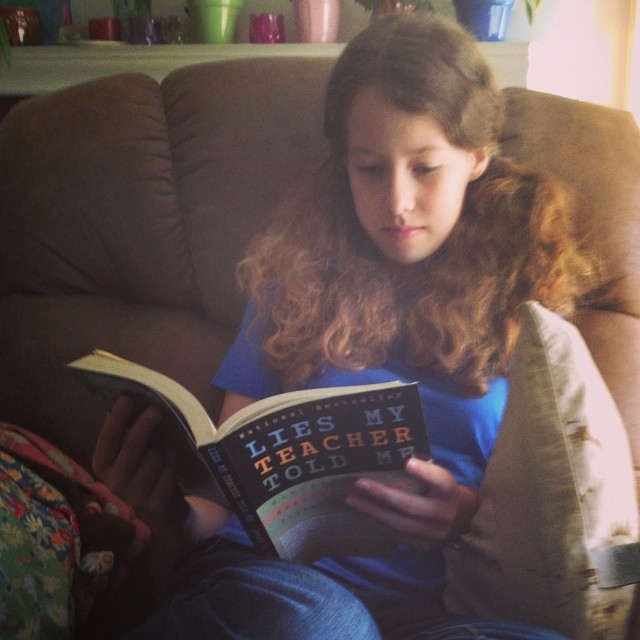 And here we are at Friday in this unusually busy week. Soon most of us will head out to a party to celebrate the finalization of a friend’s adoption—a most joyful occasion indeed. Things we did today: the trio recited their poems (“I didn’t like this yesterday but now I do,” said Huck during the brief pause for air between his, oh, I’d say fourth and fifth voluntary recitations of “The Rain”); they learned a smidge of Latin; we had our read-aloud and quiet reading times. I actually read during QRT today instead of dozing off.

It’s going to be fun, this summertime focus on the younger set, after the rich and productive (and long) high tide I had with my teens. And of course the teens themselves are enjoying the more ambling pace of their low tide. Jane’s internship is going to keep me on the road more than we’d anticipated, but it’s turning out to be a nice time for quiet conversation for the two of us and whichever of her siblings has come along for the ride. (One sibling at a time is the key.)

I’ve enjoyed keeping this log this week. As our summer days find their rhythm, I won’t have as much detail to chronicle—different books, different pieces of music, some outings. But as is our way, the overall shape of the days will be much the same. The sturdiness of our daily rhythm, enlivened by the endless variety of the books and songs and games that fill up the hours, is what makes that very liveliness possible. It’s like a tried and true recipe that you change up with different seasonings and spontaneous substitutions. A good salad, maybe, or a sandwich.

I’ve been bouncing back and forth between Forster and Eliot this week, which is silly, but sometimes I had one book handy and sometimes the other. Forster’s prose makes me ache in the best possible way. I find I’m returning to him more and more often lately, sometimes just opening to the middle of Room or Howards End and reading wherever I happen to land. And yet this is my first time reading Passage! I’m transfixed, as usual.

“She was looking through a nick in the cactus edge at the distant Marabar Hills, which had crept near, as was their custom at sunset; if the sunset had lasted long enough, they would have reached the town, but it was swift, being tropical.”

I find I’m wanting to creep verrrry slowly through Middlemarch this time, taking time to sit with an episode or even just a paragraph and breathe it in, savor its subtleties. For all Eliot is sweeping in scope (800 pages, a whole village-worth of fully realized characters), her magic is in the microcosm. This bit about Sir James, just after he finds out Dorothea is engaged to Casaubon and, after riding hard for a bit, decides to swing by her uncle’s house as previously planned—

“He really did not like it: giving up Dorothea was very painful to him; but there was something in the resolve to make this visit forthwith and conquer all show of feeling, which was a sort of file-biting and counter-irritant.”

That there’s a whole lot of character to reveal in a single sentence.