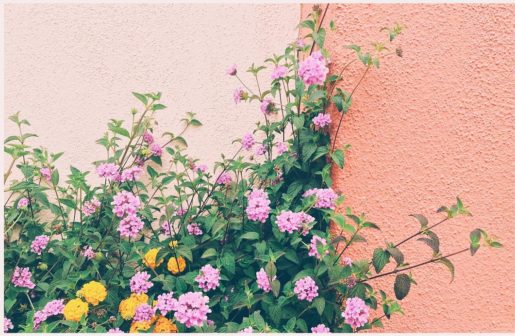 This photo was taken in June, 2018, in a little town on California’s Central Coast. At least that’s how I remember it. Today Portland is gray and bedraggled, and I needed a bit of color.

This photo reminds me that at one point, I had a whole secret theme going on my Instagram. I never told anyone (except Scott, of course) what I was going for, but I kept the project going for months. It wasn’t every photo, just one or two a week, and the theme would have been hard to guess at. It was a look at juxtapositions of color: manmade structures and objects behind or next to objects from nature. Flowers against walls, brilliant red poppies in front of a bright blue recycling bin, lime-green moss next to yellow rain boots, that sort of thing. I remember one of my favorites was a scatter of autumn leaves in a leaf-shaped pothole.

It was fun, having a secret art project. I tend to spill all my artistic secrets out of enthusiasm—sometimes to their detriment. It’s easy to lose steam on a project after I’ve had the fun of telling about it.

Back when I was writing Little House prequels, I used to have to turn in outlines for approval by the Laura Ingalls Wilder estate. Outlines are deadly to my writing process; once I’ve mapped a book out in that level of detail, the energy fizzles. It’s like I’ve had the fun of telling the story and now what’s left is the hard part, the actual writing.

So every time one of these outlines was approved, I’d sit down and write a totally different book. I never meant to; I would just start writing in the middle somewhere, searching for life, and suddenly the story would grow legs and skitter off in a different direction than the map I’d submitted.

And you know what? No one ever seemed to notice. When I turned in a manuscript, my editor edited the book she got, not the one she didn’t. I’m proud of those books and I’m happy they wouldn’t stay in their boxes. Some of the broad strokes do parallel the original outlines; there were parts of each story that I knew from the beginning I wanted to tell—the Roxbury hurricane; the story of Charlotte’s baby brother—but most of the everyday happenings in those stories grew as I wrote, not before.

I’ve been treading cautiously with my current novel-in-progress. With this one, I could see the broad outline very clearly from the first—danger! But as soon as I started writing, new developments elbowed in, pushing the early conception to the far corners of the page.

Which was a huge relief. I have to do this dance with any written work: know enough, but not too much. I remember once complaining to Scott that I had a paper due, and it seemed like a pointless exercise: “I know I can write it, and the professor knows I can write it, so why can’t we just leave it at that?” Heh. That was toward the end of a rigorous two years in graduate school and I was tired. Grinding out that paper felt rather, shall we say, academic.

Anyway, that’s where my thoughts have wandered on this cloudy afternoon. I didn’t plan this post in advance; I just searched “color” in my photo library and let my thoughts roam where they pleased.