Quick Book Recs for a Ten-Year-Old

Someone on Twitter was looking for suggestions. I rattled off a list…and then copied it to Facebook and thought of more…and I figured I’d throw the titles up here too, for easy access, though of course this is a mere sliver of what I’d put on my ideal Books for Ten-Year-Olds bookshelf. Later, when time permits, I’ll try to come back and add capsule reviews, but today is not that day.

(Um, it goes without saying I recommend my own The Prairie Thief for this age, yes? Because I’m totally saying it anyway. For boys and girls. Ahem.)

• Turtle in Paradise by Jenni Holm
• The Evolution of Calpurnia Tate by Jacqueline Kelly
• Hereville: How Mirka Got Her Sword (and sequel) by Barry Deutsch
• Smile by Raina Telgemeier
• Jane of Lantern Hill (happy sigh) by L.M. Montgomery
the Betsy-Tacy books (obviously)
• The Firelings by Carol Kendall
• The Gammage Cup / The Whisper of Glocken by Carol Kendall
• Understood Betsy by Dorothy Canfield Fisher
• By the Great Horn Spoon by Sid Fleischman
• The Children of Green Knowe by L.M. Boston
• The Great Turkey Walk by Kathleen Karr
• Rowan of Rin (and sequels) by Emily Rodda
• Wonderstruck by Brian Selznick
• The Penderwicks series by Jeanne Birdsall—the first one is my favorite
• Rules by Cynthia Lord
• Bad Island by Doug TenNapel
• Linnets and Valerians by Elizabeth Goudge
• The Ranger’s Apprentice series by John Flanagan
• The Warriors books by Erin Hunter—Rose’s longtime obsession!

Harold Underdown suggested Rapunzel’s Revenge by Shannon Hale, and I second that—my kids and I loved it (and the related Calamity Jack—both graphic novels); they love all Shannon’s books like CRAZY. Next to Betsy-Tacy and Percy Jackson, the Shannon Hale novels are the most frequently borrowed books by their friends. We basically have a Lovelace/Riordan/Hale lending library going here.

Obviously, I could go on and on here. (See the comments for more suggestions.) This truly is a just-off-the-top-of-my-head list. Also check out my master list of book recommendations!

Three Books I Loved in November

I’ve been trying to catch up my GoodReads log, but with all these graphic novels I’m reading for Cybils, it’s hard to keep it up to date. November’s list is too long to recreate here, but I’ll call out a few of my favorite reads from the month. 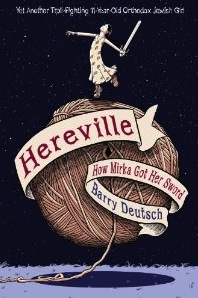 Hereville: How Mirka Got Her Sword by Barry Deutsch.

I keep calling this Trollville by accident because of the (perfectly delicious) subtitle: “Yet another troll-fighting 11-year-old Orthodox Jewish girl.” Middle-grade graphic novel published by Amulet Books. Enchanted Beanie and me. Mirka wants to fight monsters but gets entangled with a foul-tempered talking pig instead. Her sometimes comical, often hair-raising adventures occur in the context of a full, tradition-centered home life. I love books that mingle the small, gritty challenges of daily life with grand, fantastic adventures—but maybe you already knew that about me? 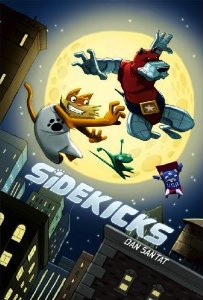 This is the gift to give your 8-12-year-old nephew or niece if you want the Coolest Uncle Ever award. Or Coolest Aunt. Whichever. An aging superhero announces that he is holding auditions for a new sidekick. His pets, who miss his company, decide to try out. His pets? Are a dog, a hamster, and a lizard. That’s right. The hamster is trying out for the superhero sidekick gig. It’s equal parts heartwarming and hilarious. And the art just knocked—my—socks—off. 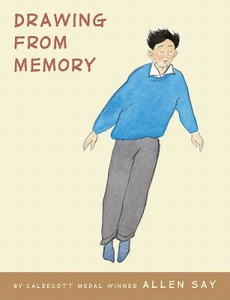 Drawing from Memory by Allen Say.

This book is really special. It’s a memoir in words and pictures. Allen Say recounts the story of his life with poignant candor. At age twelve, he goes to Tokyo to live alone (!) in order to attend a good school. His tiny one-room apartment has everything young Allen needs: solitude and a desk he can draw at. In a move full of gumption, he approaches a renowned cartoonist and asks to train under him. Amazing story. Beanie’s read it at least three times now.

Drawing from Memory at IndieBound.

I read some other excellent books this month and maybe I’ll do a part two of this post, but the days do roll away from me.