I can tell it’s December when my stats are full of searches for Hanna’s Christmas! If you’re new: it’s been out of print for a long time, so here’s a read-aloud video to share with your kids.

If you’re on the hunt for a used copy, set yourself a reminder to check Amazon Marketplace and eBay in June or July. 🙂 Resellers tend to mark the book up to ludicrous prices at this time of year, when demand is high.

Every year at this time, my blog stats show dozens of searches for the Christmas picture book I wrote long ago. It’s been out of print for ages and tends to be pricey on the resale market, especially this time of year. Last year I decided to read it aloud on video so folks who can’t find it can watch it with their kids.

And here’s my video introduction to the book. 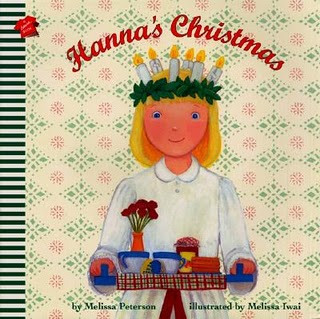 Every December I get lots of queries from kind readers wondering where they might find a copy of my out-of-print picture book, Hanna’s Christmas, for something more reasonable than the fifty-dollars-and-upward it’s going for at Amazon Marketplace these days. (Crazy!) Here’s a post I wrote about it in December, 2006. I still don’t have any leads beyond the pricey ones at Amazon, eBay, etc. So sorry, folks!

was published in 2001 as a joint effort by HarperFestival (an imprint of HarperCollins) and Hanna Andersson, the clothing retailer. (I used my married name, Peterson, not my pen name, Wiley.) The Hanna folks carried it in their catalog for a season or two, but the print run was small and it was not expected to live much longer than that.

I was commissioned to write the book as a work-for-hire, which means there’s no royalty—the writer gets a flat fee and that’s that, no matter how well the book sells. Most books involving licensed characters or merchandise tie-ins are work-for-hire projects. I don’t do work-for-hire anymore, but it was a good way to hone my craft when I was young and hungry. It was also a good way to pay scary medical bills when we were self-employed.

I’m fond of the Hanna book, although it was a challenge to write. Like every other work-for-hire I’ve done, there were a great many editors involved (senior editor, junior editor, packager, etc). I was hired by HarperCollins to write “a picture book about a little Swedish girl named Hanna who moves to America and is homesick, and it’s Christmas. Oh, and also we’d like there to be a tomten in it.”

They already had sketches of Hanna and the tomten—adorably and whimsically drawn by artist Melissa Iwai. From there it was all up to me. I came up with the storyline, which had to be approved by all the aforementioned folks plus someone at Hanna Andersson itself. Then I wrote a draft, which got bumped back and forth a zillion times as various editors weighed in with contradictory remarks.

Like this. In the first draft, I described the tomten’s hat as “red as a rowanberry.” The junior editor bounced it back with a strikethrough.

“Change to ‘his hat was bright red,'” read the note in the margin. “American readers won’t know rowanberries.”

And then the next person up the line—the senior editor on the project, whom I’d worked with before, a first-rate editor with an excellent eye—read the manuscript. She sent it back with her comments. There was a note by “his hat was bright red.”

She was absolutely right, of course. I changed it to “red as a hollyberry” and that’s the line that made it into the book. I still think rowanberry was better.

In the end, I was really happy with the book and was a little bummed it was a merch tie-in, because of course that put it in a different category of book and I knew it would never be reviewed by the critics. To my surprise, it did get a nice little review in School Library Journal, but still, it was a commercial property, not intended for a long and dignified life on library shelves. After all, the characters are all wearing Hanna Andersson clothing. Even the endpapers are Hanna prints. (We actually have a baby outfit in the same pattern.)

Last year I was amused to discover that the book had taken on a new life in the resale market. People were actually hunting for it, trying to land a copy. This year (2006) it seems there are no copies on the market at all. I guess everyone who bought it last year decided to hold on to it, which is nice to think about.