…is where I’ve been. Literally, kind of: May & June allergy season kicked off a pretty brutal adventure with asthma—same as every year, but worse this time. Last week the doctor changed up my asthma & allergy meds and I’m much improved. Still coughing but the shortness of breath & crushing fatigue are diminishing. I can wipe down the kitchen or take a shower without getting winded, which is huge.

I’ve been keeping up with my client work, but my own writing bore the brunt of the fatigue. Creative battery totally drained. This week, as I begin to feel lots better, I’m working to reset my creative practice and good habits. Taking it slow, though!

I’ve been dialed waaaay back on social media, too—which is a good thing? But this blog fell silent too, and I’ve missed capturing thoughts and adventures here. And I’m aching to be back in a fertile groove with my book. 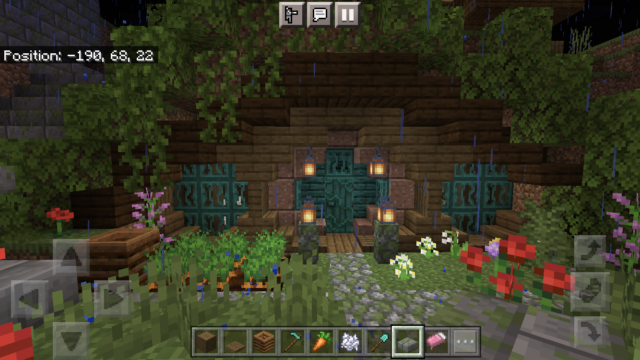 —Lots of Minecraft, with kids and without. We have a Realm where we can all play together and I had fun building a whole village of medieval-style houses for us to live in. In my own world, I’ve got a pretty little Hobbiton going. Mellow and satisfying, and certainly creative in its way.

—Read Building a Second Brain by Tiago Forte. I’ve followed his blog for ages and I really like his “CODE” process (Capture, Organize, Distill, Express) for navigating all the reading I do constantly, on many fronts, and finding connections and throughlines in the ideas I’ve captured, and writing about them to assimilate and synthesize that knowledge. Basically it’s a name for what I did on this blog in its first twelve years—gathered thoughts about my reading, noted connections, worked out my ideas about whatever topics were gripping me. Somewhere along the line I shifted to doing that work more on paper than on the blog—also a nourishing practice but it eradicated some vital steps in the Organize, Distill, and Express parts of the process. It’s so hard to find anything I jotted down in one of the dozens of paper notebooks I’ve filled over the years. Which makes distilling the ideas difficult, which makes expressing them a longer and less serendipitous process. So my big takeaway from Forte’s book was to:

—Revisit the ways I’m capturing information and ideas. I’ve used Evernote for at least a decade, for stashing away everything of interest I encounter on the internet. So this past month, I tidied up my notebooks and reorganized with Forte’s Second Brain (digital brain) “PARA” structure in mind: Projects, Areas of Interest, Resources, Archive. Now, personally I find a lot of overlap between Areas and Resources, so my system is different from Forte’s. Which tweaking he encourages, of course! But if your Capture tool has a robust search engine (and Evernote has one of the best), how you organize your notes is of less importance, because you can always surface what you need via search.

—Of course I’m still writing in notebooks. Pen and paper does spark a different kind of fertile, creative thought. So I’m making it a practice to read over my scribbles at least weekly and move anything of use or interest into Evernote. Sometimes I type things up (a helpful practice for zero drafts of poems) and other times I just take a picture. Evernote’s search can even deal with handwriting! This practice is another way of leaning into the “Second Brain” concept—recognizing that we live in an information-overload age and it isn’t possible to hold it all in one’s own (first) brain anymore. There’s a lot of peace in trusting you’ll find what you need in your archive. And, I mean, so many of us homeschooling blogger types experienced the magic of the Distill and Express parts of the process in the enthusiastic discourse that led to such good writing & experiences in those days.

—Even in my fatigued state, the thrill I get from trying out a new app or platform has been as intense as ever. Over the past year or two, I’ve tested lots of notetaking and project-planning apps (a slew of Capture tools, basically). Notion, Roam Research, Logseq, Mem, Sunsuma—these are all excellent projects with unique structures and uses. You’ll find diehard fans of each one. In the end, though (ha—there is never a true end to this experimentation), I determined that Evernote makes the most sense for me. I like its looks, its functionality, and its amazing integration. For task tracking and timeblocking, I use Todoist, and I’ve been really happy with my setup there for a long time. The other two apps I lean on constantly, with gratitude for the role they play, are Readwise and Momentum Dash. The former catches all my Kindle highlights, article quotes, and any passages I’ve marked in print books & sent (via photo) to the app; and it sends all these juicy bits of good stuff to Evernote where I can…search them whenever I want. And Momentum Dash is a nice focusing element in my browser. When you open a new tab, you get a nice clean screen with a beautiful photo—no Google distractions. You can add habit tracking across the top if you wish, plus other tidbits like the weather. And you can customize tab sets to make it easier to stay focused on a particular type of work. For example, I have one set that opens all the tabs I need to do my social media job for Low Bar Chorale. Another one opens only what I need for daily planning. It’s an elegant little browser extension that went a long way toward cutting down drifting and getting sucked into feeds, or having Twitter open all day.

(P.S. That Todoist link is an affiliate link—I rely on the app so much I signed up for their referral program. If you’re interested in how I use it to keep track of homeschooling, housework, medical admin, client work, and creative projects, I’m happy to rave about my system anytime.)

—Since May, I’ve written the first three (!) Brave Writer Darts of the current year’s lineup. Am at work on the fourth, for Pam Muñoz Ryan’s lovely novel Solimar, now.

—I’ve worked a little bit on a long-term project to create a resource for Oregon families with a kid making the shift from child disability services to adult services. I documented the almost-a-year-long process we navigated for my son, and I was stunned to discover the road map/timeline/checklist I yearned for doesn’t exist. So I’m making one to share. Slow but steady progress.

—As for stitching, I’ve mostly been mending socks and jeans. My embroidery projects have been on idle.

—And (since this got long!) one last thing I’ve been reading and enjoying immensely: A. R. Moxon’s post series called “Unpacking LOST.“ I’m a major LOST fan, have watched the whole run at least six times, plus twice more chronologically. Moxon’s take on the show is brilliant and riveting, and each time a new installment drops, it makes my day.

Hope summer is treating you well, friends. Let’s catch up!