During the long months of this pregnancy, I have been blessed with the companionship of a few special friends. We used to see each other only once a month, but lately we’ve been able to get together once or even twice a week, and how eagerly I have looked forward to these sweet moments of fellowship with women whose joy in motherhood outstrips even my own!

I realized today that our time together is drawing to a close…very soon (very, very soon, do you hear me?) it will be time to go our separate ways, and we shall see each other only once a year or thereabouts. Ah, dear friends, whatever will I do without you? Fortunately I happened to have my camera in my bag at our visit today, so I was able to capture a few treasured snapshots of these fair and tender ladies I have come to know so well.

Here they are all together with their precious infants, the whole beautiful bunch of them. Aren’t they lovely? 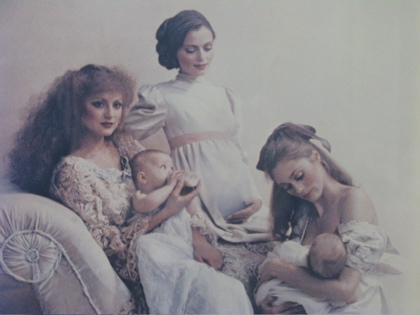 So serene, so gentle, so rouged. 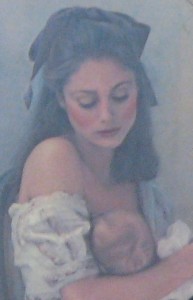 I have learned so much from these ladies. For example, here I am about to give birth to my sixth child, and yet until I met Angelica would you believe I had no idea it was advisable to blow-dry one’s hair to a silky sheen, tie back a few glossy locks with a ribbon, don a ruffly off-the-shoulder gown, and apply several coats of blusher before sitting down to breastfeed one’s baby?

This is going to make a real difference in my next post-partum experience, let me tell you. Angelica always looks so calm and well rested. I realize now that my customary get-up of hastily scrunchied ponytail, spit-up-stained T-shirt, and no makeup whatsoever has been at the root of the exhaustion I typically experience during those first weeks with a new baby. LOOK beautiful and you’ll FEEL beautiful is Angelica’s motto.

Elspeth has a similar philosophy about pregnancy. I understand now that in banning white clothing from my wardrobe several sticky-fingered toddlers ago, I have been depriving myself of a kind of delicate radiance that would surely have blessed the child in my womb and all in our presence. And that band of pink ribbon below her bosom—how beautifully it offsets her the rosy glow of her lips. Every word that comes out of a mouth like that is pure honey, I suspect. (I can’t say for sure, because demure Elspeth never utters a word. But you can see just by looking at her that she is full of warm and soothing thoughts.) 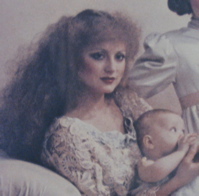 As for our ringleted chum Swoozie, I admit I worry a little about her sometimes. Those raw bruises on her cheek…the dark rings around her eyes…her habit of staring off into the distance, lost in thought, absently feeding her infant without even looking at him…I have some concerns about her home life. But she has never uttered a word of complaint, so perhaps I’m mistaken. Possibly she is only thinking about when to get her next perm.

Oh, dear friends, how grateful I am for the many times you have entertained me while I waited for our obstetrician to amble into the exam room! It is very good of you, all of you, to have kept such a patient vigil with me as the long, long minutes ticked by.

You will be sorely missed. 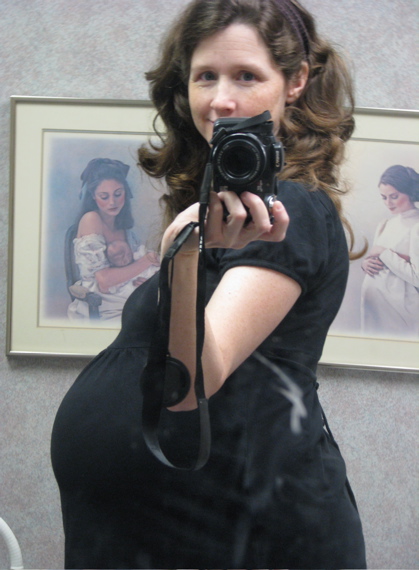