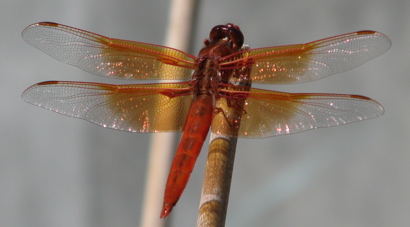 This photo at Studeo is one of the most endearing sights I’ve ever seen. The smile, the cape, the mane. Awesome.

Don’t you wish reading and sleeping could be two completely interchangeable activities as far as our bodies’ well-being is concerned? If, instead of sleeping for six or seven hours, you could sleep for three hours and read for four, and be just as refreshed and healthy as if you’d slept all night?

Scott brought me home another winner from the library on Saturday, increasing my so-many-books-so-little-time torment. I’m still reading Gilead, ever so slowly, savoring the syllables, the quiet depths. But now I’m also reading—gulping—Fruitless Fall: The Collapse of the Honey Bee and the Coming Agricultural Crisis. This fascinating and rather terrifying work of nonfiction was written by a grad-school classmate of mine, Rowan Jacobsen. I think Jane will want to read it next. I’m loving Rowan’s conversational-but-smart prose. I’m chewing my nails off over the disappearance of the bees. Shortly after I started the book, I told Scott: “I expected this book to alarm me. I didn’t know it would scare the pants off me. By page two.”

Lots of quotes and thoughts to come, I’m sure. This is the kind of book that sticks with you (no honey puns intended).

I also had to squeeze in another Agatha Christie, at Jane’s request. She wanted to discuss something about the book’s conclusion, a plot point which was bugging her. Elephants Can Remember was one of Christie’s later books, I believe—at least, it takes place in the 1970s. A Poirot mystery, but not one of her best. And Jane’s question? Had to do with a massive flaw in the plot, one which I didn’t notice until she pointed it out. That’s my girl.

Stuff My Girls Are Doing These Days

(As with my garden notes, I like to jot down these lists from time to time so I’ll remember what everyone was up to at this season or that.)

• reading Agatha Christie until her eyes fall out
• crocheting (matching skirts for Rilla and herself—Rilla’s is finished; ain’t it sweet?)
• listening to Abba
• coloring in her Tesselights stained glass coloring book
• playing catch with her daddy
• reading Dragonsinger, lots of Josephine Tey, Homeless Bird
• exchanging smiles with “Somebaby,” as she calls him
• singing with Rilla
• picking lettuce for salad
• taking a watercolors class
• practicing for piano guild
• telling me cool stuff from Muse magazine
• figuring out the location of her Journey North mystery class

• drawing pictures
• reading Warriors books more than anything else, but lots of other things too
• poring over the Nature Experiments books
• thinking about ways to get the monkeys in Zelda
• playing Hex Empire, or watching me play it
• with Rose, looking at optical illusions on my iPod (Eye Tricks is the name of the app)
• playing wolves

• lots and lots of Runescape
• reading As You Like It with me
• Wii Fit
• Wii Legend of Zelda Twilight Princess
• playing catch with their daddy
• watching X-Men cartoons
• watching Empire Strikes Back
• running through the sprinklers
• playing with the balls their uncle sent—a whole big boxful!

This post is for me, just so I’ll know what was blooming when. Also I think my mother will like to hear how fruitful her labors were this winter and spring.

I’m laughing at the bare mulch behind the children in the pictures on my last two posts. That’s the only part of the yard where things aren’t awash in flowers, but it’s where we sit in the afternoons because that’s the only bit of grass with shade. And the mulch bed is bare for the same reason there’s shade: the neighbor’s pepper trees tower over the fence, blocking all afternoon sun. I’ve tried some (shade-loving) impatiens there but they didn’t amount to much.

The rest of the yard, though, oh my. An abundance of bloom.

“What brand are your sketchbooks? They look wonderfully sturdy and kid-friendly. I have never thought to take watercolors outside, your pictures make it look so simple (much simpler than inside painting) I must try it.”

We’re using these 8×8″ recycled sketchbooks from Stubby Pencil Studio. We like the small, square shape and the sturdy cardboard covers (plain brown, easily decorated). I bought them to give the kids for Christmas and forgot about them. I remembered I’d also bought and forgotten these neato-bandito “Smencils“—#2 pencils with yummy scents like cinnamon, orange, and root beer—and when I dug the box out from under my bed where I’d hidden it, the sketchbooks were there too, a nice surprise.

This is the same place I got the Crayon Rocks that so delighted Wonderboy on his birthday.

As for our outdoor painting supplies, the watercolors are just the cheap Crayola sets. 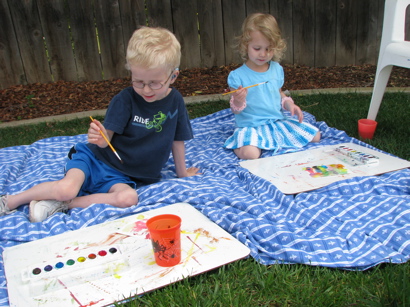 When my older kids were little, I read lots and lots about the benefits of providing children with really high quality art supplies. In some cases, I still agree: Prismacolor colored pencils are worlds better than your drugstore variety. The lead is so creamy and blendable. They’re expensive but they last a long time—we’re on our second set of 72 colors in over ten years.

But watercolors? Real watercolor paper makes a huge difference, but it’s expensive; that’s one reason I was so taken with Jenn’s idea to cut it into smaller, postcard-sized pieces. But when it comes to the paints themselves, well, I’ve been the high-quality route, absorbed the persuasive literature that talks about rich pigments and translucent hues; bought the pricey tubes of red, yellow, blue; collected jars for mixing colors; watched my children squeeze out too much paint and gleefully swirl it into an expensive puddle of mud-colored glop.

Lesson learned. The 99 cent Roseart or Crayola sets work just fine. In fact, dare I say I think my preschoolers like them better? Mixing colors is fun, but there is nothing quite so appealing as that bright rainbow of pretty paint ovals all in a row. When Wonderboy and Rilla make a mess of their paints, Jane cleans them up with a rag and they’re practically good as new. 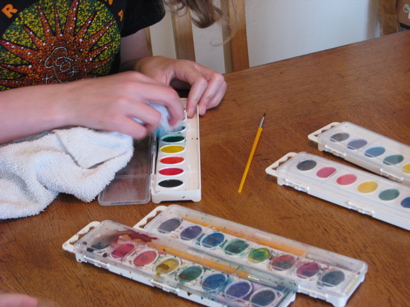 Jane’s taking a watercolors class herself, and for that I was happy to buy nice quality paints. But for casual backyard painting for my other five kids? No more tubes.

One last note—we really like to use painting boards under our paper. A long time ago I bought a box of dry-erase markerboards very cheap. They were scratch-and-dent discount items. I wish I could remember the website. Anyway, these make fabulous painting boards. They clean up easily, if you’re inclined to wipe them down. We usually aren’t. 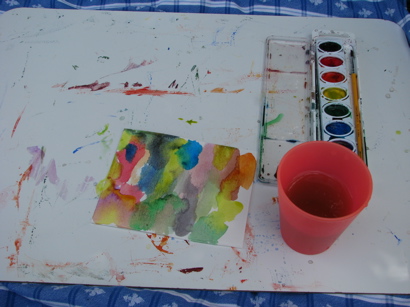 Poetry Friday, But This Is Prose

A passage for the commonplace book:

I saw a bubble float past my window, fat and wobbly and ripening toward that dragonfly blue they turn just before they burst. So I looked down at the yard and there you were, you and your mother, blowing bubbles at the cat, such a barrage of them that the poor beast was beside herself at the glut of opportunity. She was actually leaping in the air, our insouciant Soapy! Some of the bubbles drifted up through the branches, even above the trees. You two were too intent on the cat to see the celestial consequences of your worldly endeavors. They were very lovely. Your mother is wearing her blue dress and you are wearing your red shirt and you were kneeling on the ground together with Soapy between you and that effulgence of bubbles rising, and so much laughter. Ah, this life, this world.

—from Gilead by Marilynne Robinson

Sherry, you were so right; this novel is exquisite. I’ll have more to say, much more, in posts to come.

Here’s a link to Sherry’s Semicolon post on Gilead, which is where I first heard about this gorgeous book.

Scenes From a Backyard

This fine crop of sunflowers sprang up beneath our bird feeder. Thanks, birds! 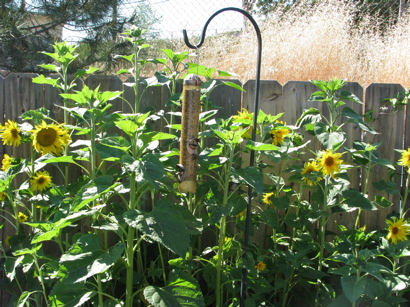 One of the sunflowers has nine blossoms on one stalk. I’ve never seen this before. It’s very cool. 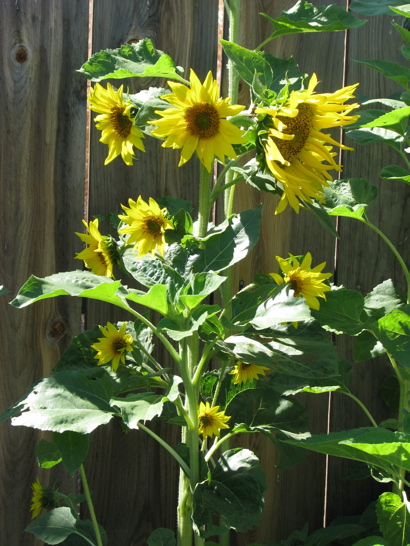 We’re spending a lot of time in the backyard these days. This morning I packed a bag full of sketchbooks, colored pencils, watercolors, stuff I found around the house. A set of Sandra Dodd’s Thinking Sticks I bought a couple of years ago, some Trivial Pursuit cards, a pencil sharpener. Borrowed Jenn’s BRILLIANT idea of cutting good watercolor paper into postcard-sized pieces for kids to make small paintings. 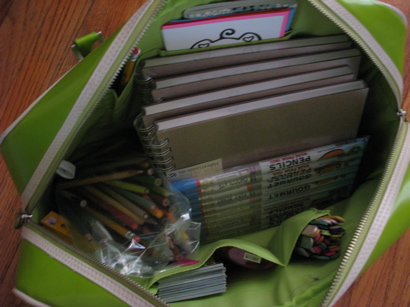 I figured we’d be much more likely to sketch and paint if I made it easy to transport to the yard. I was right. 🙂 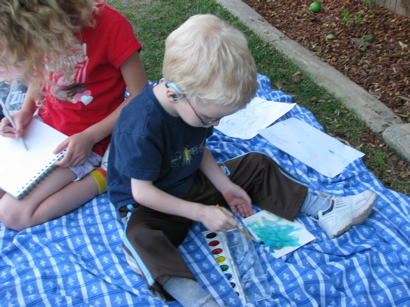 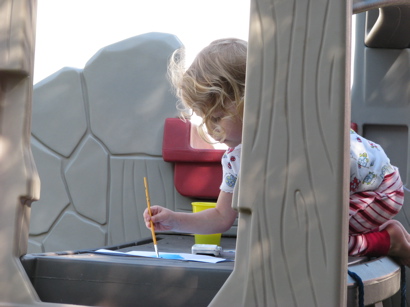