Cover assembled from bits and pieces of my precious Small Meadow Press stash. I love that lantern beyond all reason, have ever since I first saw it on Lesley’s papers and site. 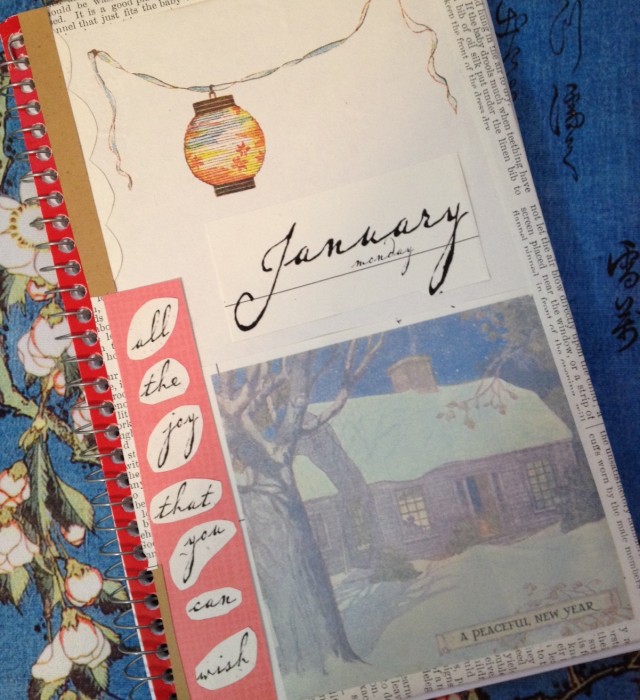 (Photo updated Jan. 1st after Rilla and I added the print borders)

The notebook isn’t new; I’ve been scribbling in it on and off since October. And actually the first page is a reading log of Beanie’s from a while back, but of course that makes me love it all the more. I switched notekeeping methods this past fall; for the past year or two I’ve been using the bright-covered unlined Moleskines, which work pretty well for me, but I decided I prefer a spiral (not in looks but in use) after all. I’ve used these little 5×7 spirals for a million years. Got stacks of them stored away in boxes: notes for various books; old shopping lists; scraps of poems; endless to-do lists; enough medical marginalia to fill a filing cabinet. Even though this particular book is in progress already, I decided to prettify it for the New Year. It will probably carry me past January into February and beyond, but I’ll like looking at that lantern in any month.

Here’s the inside front cover…you’ll see that Rilla was having fun snipping bits of phrases out of the old (June 1890) magazine-page photocopy we were using for the borders. Eep for Babies indeed. 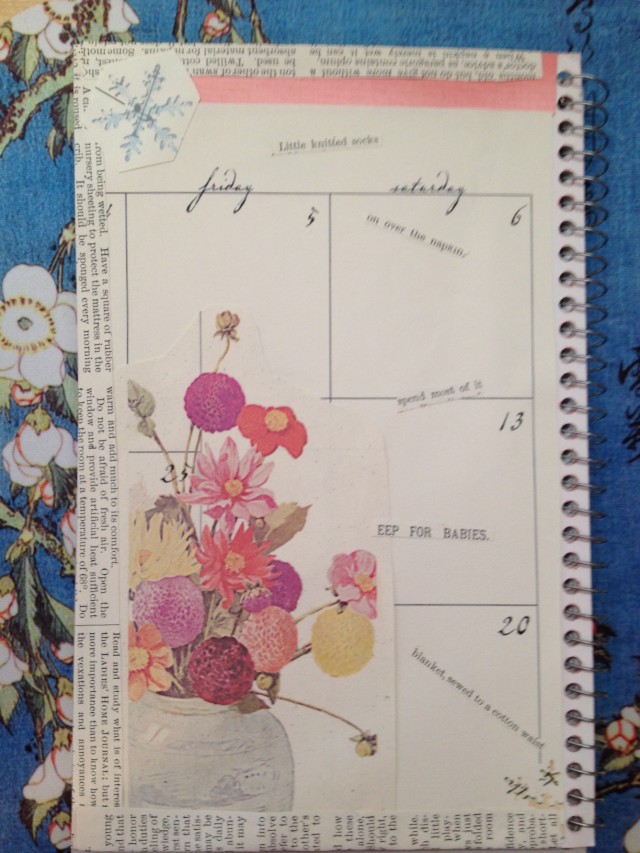 Speaking of Lesley Austin (and if I’m talking about paper, it’s impossible for me not to talk about Lesley), she is hosting a “papery days” linkup, and if you too are what she calls a papergirl, you’ll sigh happily over her lovely photos. I don’t believe there’s ever been a single Lesley Austin post that hasn’t inspired me one way or another, both at her blog and over at Wisteria & Sunshine.

She’s got you there, buddy

If you don’t read my sidebar, you might miss the link to this post, and I’m of the opinion that no one should miss this post. 😉

Well, since all previous methods of logging our picture book reads have proven unsuccessful over the long haul, I’m going to give this quick-and-easy method a try: I’ll try to snap a pic of each day’s pile and toss it up on Instagram. Then, if time permits, I can annotate the photo here. Here’s yesterday, a very good haul—mostly library books of the kids’ choosing. 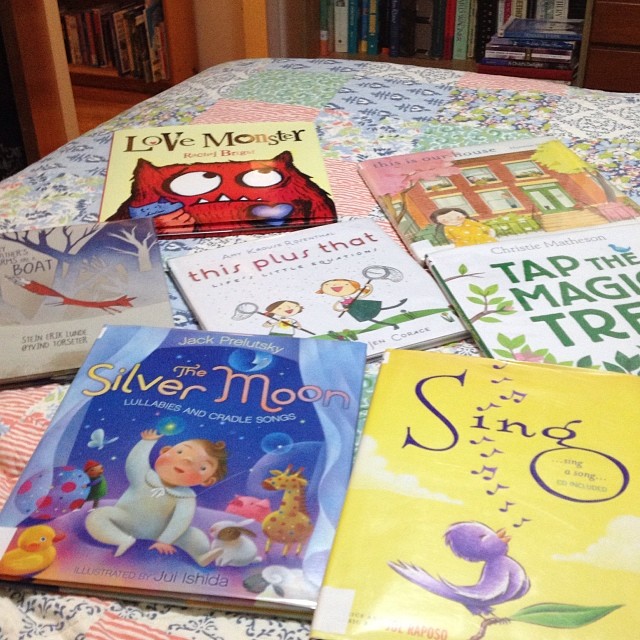 Love Monster was sent to me for review and has a lot of charm. I think we’ve all had days where we’ve felt like the only monster in Cutesville.

Tap the Magic Tree was a Rilla pick, I believe, and delighted all three of my youngest, but Huck most of all. At least, until he dissolved in tears over the page that Rilla tapped first. Each tap, rub, wiggle, or air-kiss brings changes to the tree as we follow it through the seasons.

This Plus That is delightful, and of this bunch is the one I’d be most likely to buy. Little equations from daily life. Chalk + sitting = school. Chalk + jumping = hopscotch. Gave us loads to talk about. Amy Krouse Rosenthal always does.

This Is Our House is a sweet and simple story of three generations of family making a life in one beloved city house. The kids seemed to find it really satisfying, in a kind of calm and peaceful way. It has been requested several more times since that first read. They enjoy the comforting full-circle of the pattern: the little girl learning to walk on the same street her mother had toddled on years before; the same cherry tree blooming in the spring. Wonderful art in this one.

The Silver Moon is a poetry collection and we’ve only read a few pieces—lovely so far.

My Father’s Arms Are a Boat is a book I would hesitate to give as a gift but would recommend to certain friends, certain kids…it’s a very sad story; the mother has died, the father and son are mourning, but this is shown through poignant words and actions, not spelled out in a narrative manner. It’s one quiet night, one starry sky, one touching conversation. A hard book to describe. We were into it before I knew what I was reading, and the children were captivated, there was no turning back…and I wouldn’t want to, I’m glad we shared it together. But it’s a sad, haunting poem of a book, and I can see that it might be emotionally wrenching for some children. So don’t do what I did. Preview it first. It’s a good read for adults in its own right.

Okay, I can guarantee I won’t be annotating every one of these photos. But I can snap the pic, at least, and have the record.

(No photo for today because—gasp!—we didn’t read any books together!)

“For the lover of truth, discussion is always possible…”

I’m standing at the bathroom sink putting in my contacts. Huck wanders in, says seriously: “Can we have a little talk about tweetle beetles?” 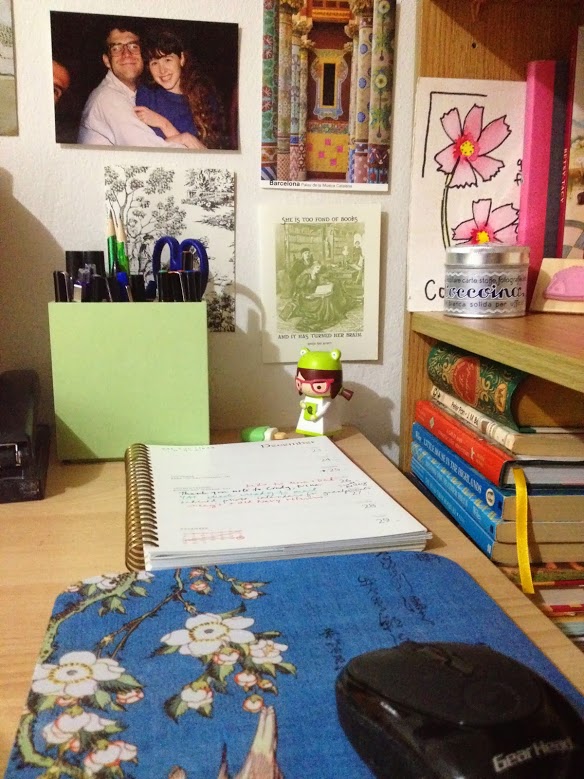 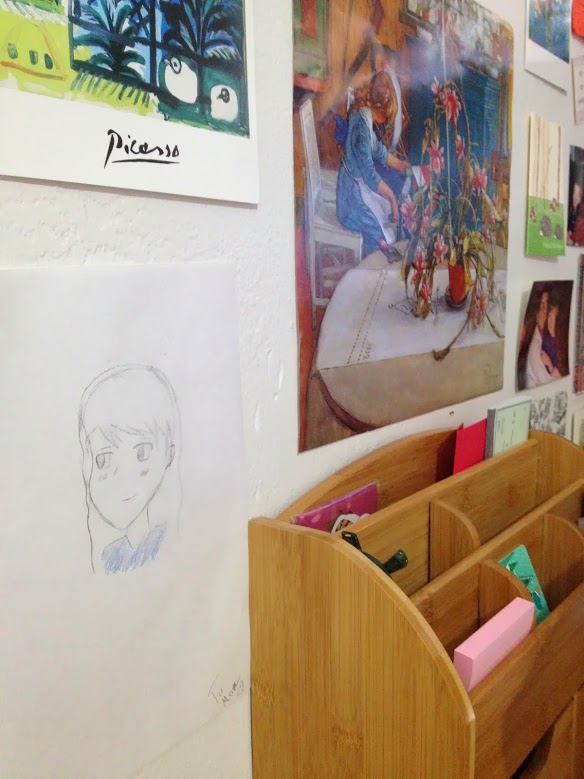 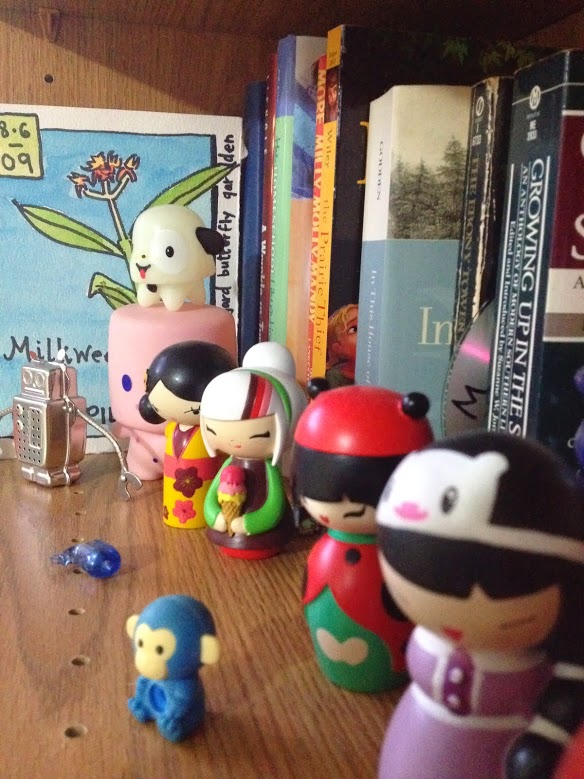 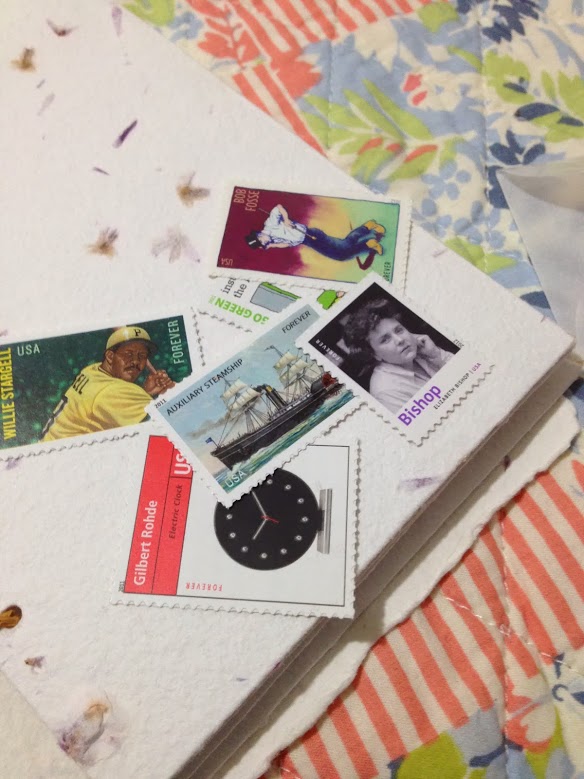 Scenes from our Christmas Day…

We took a drive north to Julian and stopped off to wave hello to the camels—an occasional tradition ever since the time shortly after we moved to California when we were enjoying a country drive and eight-year-old Rose exclaimed, “I just saw a camel!” We all thought it must have been a cow or a horse, but a rather indignant (and who wouldn’t be, accused of confusing camels with cows?) Rose insisted she knew a camel when she saw one. A few yards later, a large sign proclaimed OASIS CAMEL DAIRY. We apologized to Rose for our skepticism, turned the car around, and gawked. And now we go back every couple of years to gawk anew. 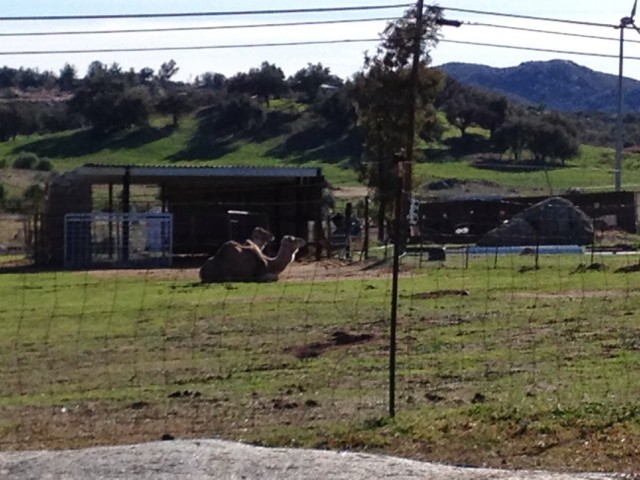 While we were there I took about fifty pictures of the six kids balancing on an old rail. Seemed an apt representation of our lives: precariously balanced, a bit off-kilter, and full of laughter. 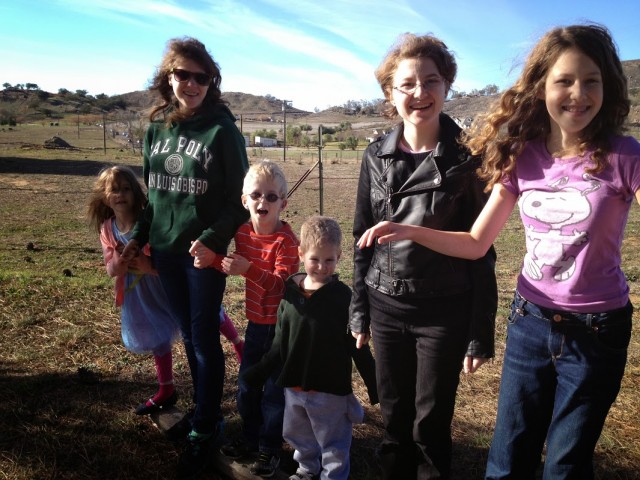 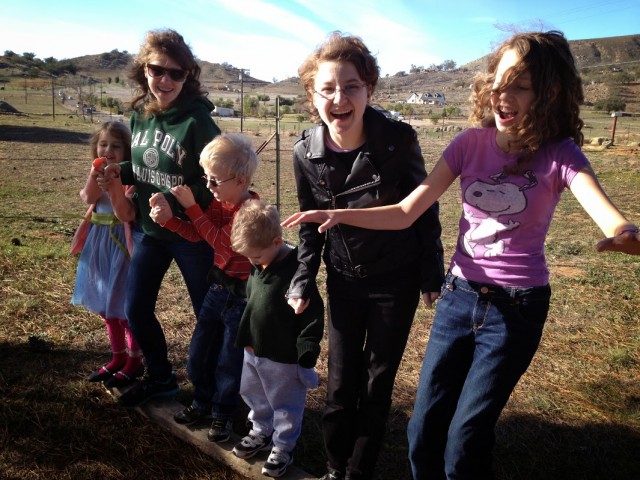 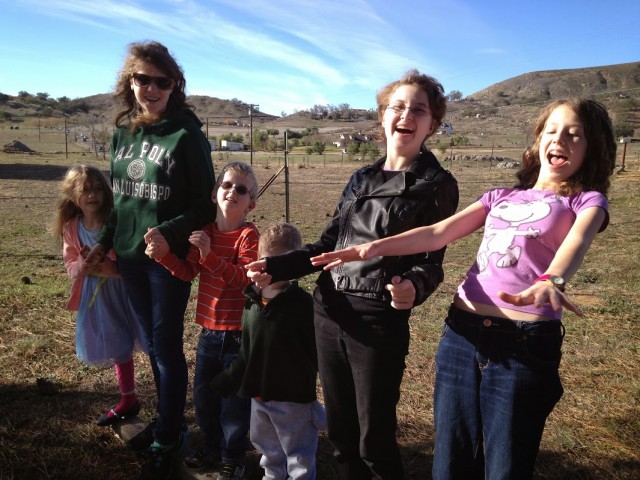 Among Rilla’s presents from my parents was an adorable sewing kit. Pre-cut felt animal shapes for her to stitch and stuff, plus loads of embellishments. She worked all Christmas evening on this button-eyed elephant. 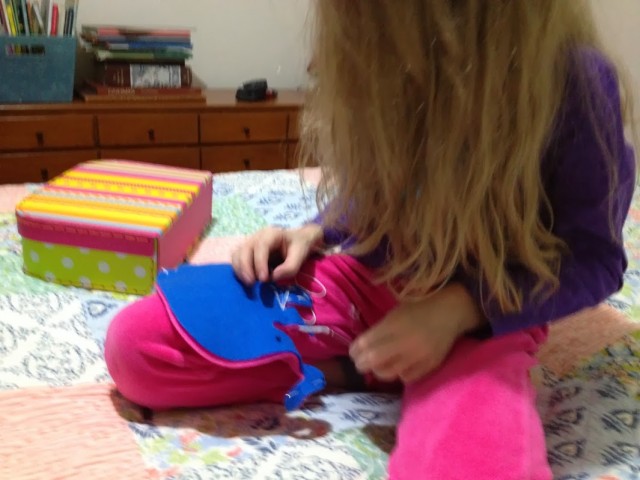 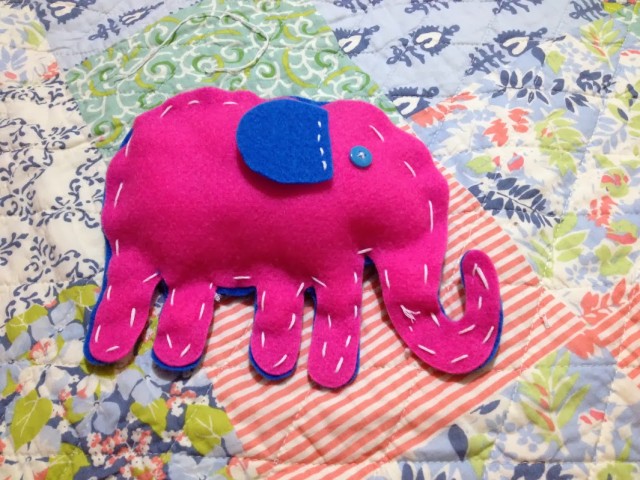 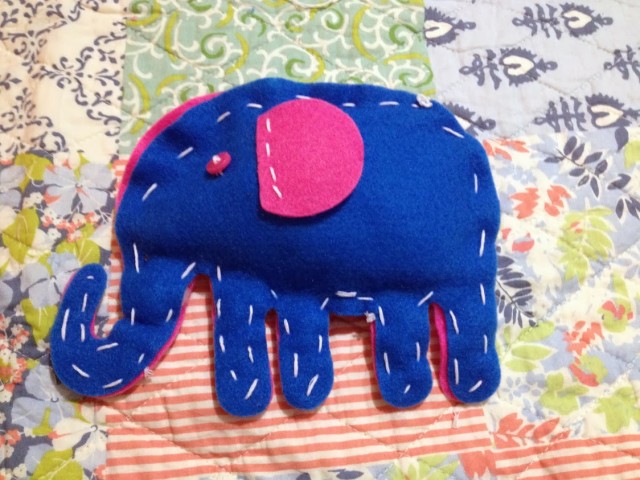 Not pictured: the moment Huck dazzled us with a sudden leap into real reading! First there was the “DO NOT BLOCK HORSE TRAIL” sign in the roadside pulloff where we were, in fact, blocking the horse trail while hastily scooping a carsick Rilla out of the minivan. (Too late.) Then, back at home, Rose was playing her new Wii game with the dialogue set to Japanese (verbal) with English subtitles. And Huck sat there and read the subtitles out loud. So that’s #6 over the bridge. What a journey!

Six of one, half dozen of the other

Rilla: Mommy, do you know where any chalk is?

Me: Afraid not. It was all taken outside, remember.

Me: I know where some fake money is, though.

Bernard Beckett’s Genesis is 1.99 on Kindle today. It was one of my favorite reads of the year a few years back:

After plague and war decimate the human race, a small group of survivors build a protected, isolated island community called The Republic, modeled on Plato’s vision of the perfect society, but rigidly totalitarian. We learn about the history of The Republic via the oral examination given by the somber members of the esteemed Academy to Anax, an earnest young scholar who has prepared long years for this event in hopes of admission. Anax’s subject of specialty is the revolutionary, Adam Forde, whose subversive actions brought down The Republic many years before. A serious and captivating aspect of Adam’s history is his relationship with a robot possessing highly advanced simulated-consciousness technology, and their discussions about the nature of consciousness are incredibly gripping and thought-provoking.

Melissa Wiley was born December 17th. In celebration of her birthday we’re making a special offer. The Arrow for The Prairie Thief is half price today only: $4.95!