Anyway, I read about WorkFlowy and had to check it out for myself. It’s a streamlined, basic listmaking platform—and it’s marvelous.

It isn’t flashy. Just a simple list of bullet points in outline form, black text on a white screen. (There are a few other theme options, but none of them appeal to me.) You indent your bullets with the tab key, creating as many tiers as you like.

Here’s my basic list, collapsed so you only see the main topic categories. 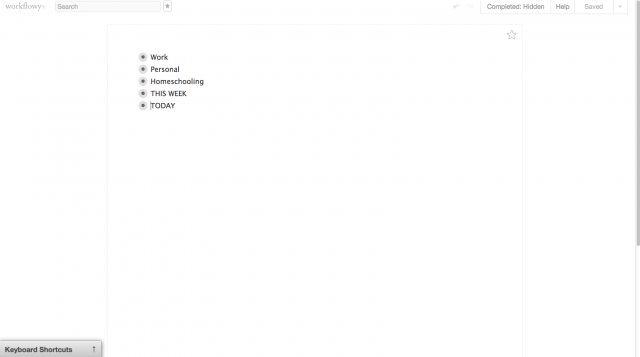 This image shows you my whole Workflowy tab because I wanted to show how uncluttered the interface is. I’ll crop the rest of my pictures so you can see the list up close.

The grey circles around the bullet points mean there are entries under each one. Above is the collapsed view, hiding the rest of my outline. Let’s click to expand something. 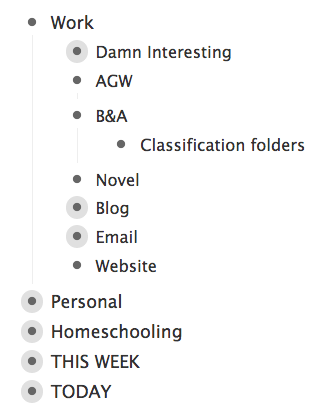 Here I’ve expanded the Work item, revealing various work subcategories I have created. My freelance clients, the novel I’m revising, and so on. I stuck my blog under work because it’s related to writing or editing, just like everything else on this section of the list.

So far, Personal is divided into subcategories like this: 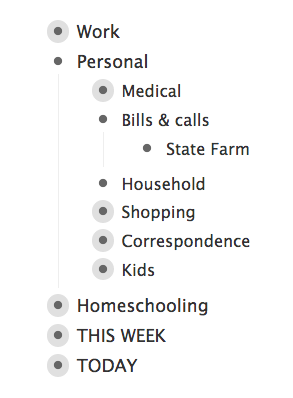 Under “Kids,” I have subcategories for each kid. (Workflowy calls them “children,” by the way—the subcategories, I mean, not my offspring. The top-level bullets are “parents.”) I’m finding this section particularly useful, a place to record who needs new shoes or has an activity coming up. It does have a bit of overlap with my Medical, Homeschooling, and Shopping categories, so as time goes on I may find I prefer to combine some of my sections.

You hover the mouse to the left of the bullet to pop up the collapse/expand option. Hovering over the bullet itself gives you a chance to mark the item complete, add a note, or other do other things with it, as you see in the popup. 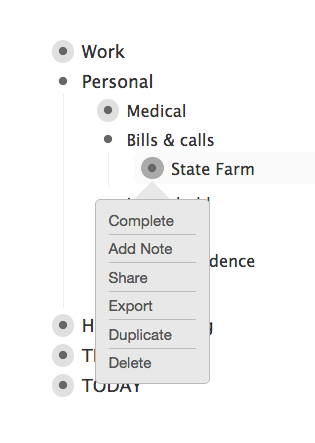 If you click on a bullet point, the switch to a view of just that one parent category and its children. Like this, when I click on the bullet next to “Homeschooling.” 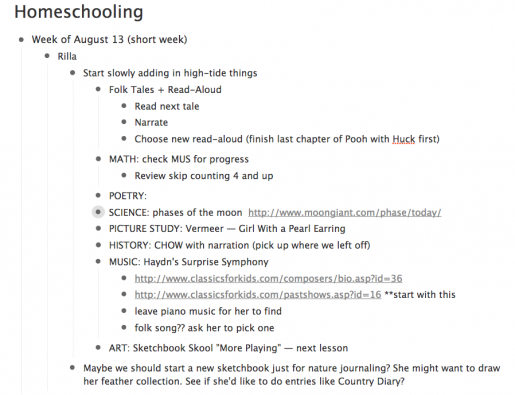 And here you see where I began to fall in love with Workflowy. It allows me to keep everything in one place—plans, lists, links, the works—and yet it’s not at all cluttered or busy. Even Evernote can’t match this ease of use, in my book.

HOMESCHOOLING TANGENT: Whenever we are beginning a new season of high tide, I tend to start off with pretty detailed lists of things to do, read, strew, and talk about. As the weeks roll on, I fall into a rhythm and can pretty much wing it, day to day. I’ll know what books we’re reading and what else I ought to be paying attention to.

I mention this because I don’t want to give the impression that I am THIS organized all the time. 🙂 Three or four weeks from now, I’ll more likely be jotting down what we did (past tense) at the end of a day rather than a plan-in-advance for what the day will bring. After so many years of rolling with the tides, I have a pretty good sense of how I work, and what works for us as a group. But August wouldn’t be August if I didn’t have some long lovely lists going on.

(Oh, and re the Vermeer and Haydn entries: I’m drawing from the Harmony Fine Arts mini-unit. What a lovely and flexible resource!)

BACK TO WORKFLOWY. That image shows why I prefer onscreen planning for certain things. I do the same kind of thinking aloud, rearranging, and mind-changing on paper, but then of course I wind up with a page full of scratches and arrows. That Workflowy screenshot doesn’t show you how many things I altered after the first brain-dump. Shift + tab moves a bullet to the left, if you want to change its category level. (There’s a keyboard shortcut that allows you move things up or down, but it isn’t working for me. Supposed to be control + shift + arrow, but maybe it’s different for Mac? I haven’t bothered to look it up yet.)

ADORABLENESS TANGENT. The other day Rilla watched me copy and paste something with keyboard shortcuts. “Oh,” she remarked, “do you use Crickle-C too?” ::melt::

NO BUT SERIOUSLY, THIS POST IS ABOUT WORKFLOWY. You can toggle your view to Completed: Hidden if you want your finished tasks to disappear, or pop them back into view with Completed: Visible. (You can see the option up there in the first image, top right corner.) When visible, completed tasks are grayed out with a line through them. Highly satisfying.

You can also add tags! And then filter so only certain tags are showing! Beautiful feature. The search function in general is a most excellent addition to my to-do list process.

I added my THIS WEEK and TODAY categories to help prioritize stuff I really, really don’t want to let fall through the cracks. The hover-popup menu I showed above has a “duplicate” option, if you want something to appear in multiple places. This, too, could be highly useful for homeschool record-keeping or planning. Or menu-planning and so forth.

And that’s about all I’ve figured out in my first week of use. 🙂 There are a lot of video tutorials on the site to take you deeper. I think I’m only beginning to discover its applications. For example, there’s a “share” option that lets you share items with another user. So many possibilities for that! I can see using it with the older kids to keep track of who’s read what. Or we could share a shopping list, and when one of them needs something they add it and it pops up on my screen. That could be awesome.

Oh, and File > Print will put your list on paper.

There’s a mobile version too, of course, so all these lists can travel with you on your phone or tablet. I’m pleased with the interface so far, but I’ve spent most of my time on the desktop version.

I admit I’d love a theme option that allowed my text to be blue, red, or green on a white screen, but that’s a small complaint. The plain-jane version is fine.