Anyway, I read about WorkFlowy and had to check it out for myself. It’s a streamlined, basic listmaking platform—and it’s marvelous. END_OF_DOCUMENT_TOKEN_TO_BE_REPLACED

Last night’s talk on habits seemed to go over very well. I was astonished that we had forty moms in attendance! We set up chairs and blankets in my backyard. Several of you have asked for a write-up of the talk, so I’ll work on that during the week. Thanks so much for your interest!

Playing catchup tonight, so this will be another quick one. I’ve been making my way through Mystie Winckler’s Simplified Organization eCourse (affiliate link, and I think the “backtoschool” discount code still works), and I really enjoyed her video on Google Calendar. Same thing happened with gCal as happened with Evernote when I read Mystie’s Paperless Home Organization book: in both cases I thought I was already using the platform in question in a fairly savvy manner, but Mystie taught me some tricks I didn’t know. In the case of Google Calendar (my lifeline for years now), I already had multiple calendars set up that I toggled on and off for various views: Appointments, Kid Activities (including, this summer, Jane’s work schedule; also includes family birthdays), and a Deadlines calendar I share with Scott. But now I’ve added:

• a Household calendar for tracking my daily chores, the ones assigned to specific days of the week a la Flylady;

• a Readalouds calendar (a brainstorm that came to me after Mystie’s video; I’ve tried many ways of logging our numerous picture book readalouds through the week and I always wind up dropping the ball; we’ll see if this one works );

• and a very simple Zones calendar that displays the Flylady zone of the week. I’ve been using Flylady’s schedule, modified, on and off for some fifteen years now! When I follow it, the housework flows so much more smoothly. Until now I never thought of having a gCal dedicated solely to announcing the week’s zone.

The Household calendar has already proven its merits. I created it over the weekend and made recurring entries (not pegged to a specific time, so they appear in bands of color) for the rotating daily chores. Then, for extra tasks such as the ones associated with hosting a houseful of moms, I assigned times (somewhat arbitrary, but I did find it kept me progressing through the tasks through the day) so that those would show up without the orange background.

I’ve never tried anything like this before—listing the individual chores necessary for a non-routine event—and it worked amazingly well for me. I was able to work through the list in a pretty calm manner, not the frazzled frenzy that is my usual state when preparing for company. 🙂

I didn’t put our regular morning/afternoon/evening chores on this calendar because those are routine now, for the kids and me. This is only for my jobs that come around weekly or less often.

I got carried away there and wrote more than I meant to. 🙂 I’m thinking about adding yet another gCal for our High Tide studies. I have it marked out in colorful chalk and propped on the mantel where I can see it from my favorite chair, but I think I might enjoy seeing it laid out this way too.

This morning we returned to our (still new) schedule. We’re having a good time with Latin, brushing up on what we learned last go-round. For some reason Latin brings out the merry in all of us. Rose and Bean and I are back to our Romantic poets, so you know I’m in heaven. We’re reading Lear aloud—Rilla is doing a bang-up job as Cordelia—and today (at long last) Rose and I started Paradise Lost. Beanie and I, meanwhile, are spending a few weeks in the company of my beloved Mr. Twain. She’s knee-deep in Connecticut Yankee at the moment. I need to catch up to her.

Obviously we’re going heavy on Lit at the moment. There are other things afoot, of course. Including a whole lot of D&D character-building among the girls. For Rose’s birthday last week, I gave her a new adventure module with a promise to DM for them. In a momentous gesture, Rilla has been invited by her big sisters to join the game. This necessitated a lot of poring over manuals to find the perfect combination of character race and class. I believe she settled upon half-elf paladin. Backstory in progress. I think Rose may enjoy creating characters and fleshing them out even more than playing the game. A girl after my own heart.

Related post:
It’s funny that I am simultaneously a paper girl and a fan of Paperless Home Organization 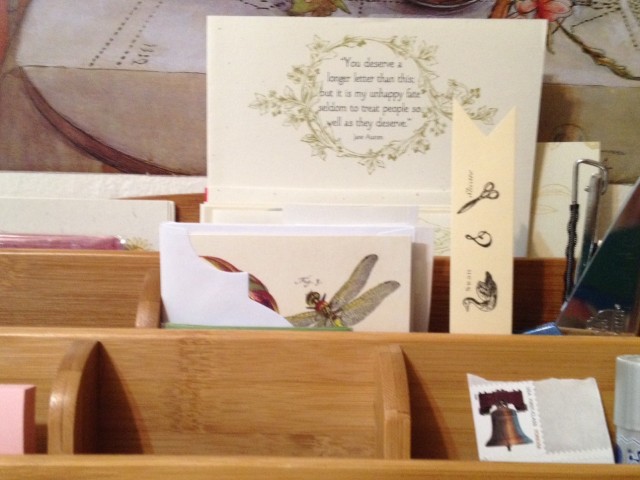 Really really really good tips in the Mystie Winckler book Pamela Barnhill recommends here, gang. I thought I was already using Evernote & Google Calendar efficiently, but I picked up some useful new ideas (including better integrating my systems) in the book. Which is 30% off with the code in Pam’s post. So, like, under $3.

In Paperless Home Organization, Mystie Winckler leads you through the process of using digital applications to build your very own paperless system. She walks you step-by-step through how to use four free apps to digitally store the same information you would normally keep in a home management binder.

Which means if you have a smartphone, or an iPod Touch, or any tablet, then your binder no longer sits cluttering up your counter, but in your hand — at the doctor’s office, the bookstore, even at your school room table.

I’d been meaning to try Remember the Milk—my pal Ron raves about it, and he doesn’t rave lightly—and Pam’s post, and Mystie’s book, nudged me to take the plunge. Last year I relied on TeuxDeux for daily task management, but my free trial period ran out and I decided I wasn’t enough in love with it to pay for it. It’s a really gorgeous, clean layout but too hard to go back to past days. Remember the Milk isn’t quite as visually appealing (its web app, that is; on my phone it’s quite nice) but it is so much more flexible and functional. Thanks to Paperless Home Organization, I’ve now got it talking to my Gmail account (my RTM to-do list pops up in my inbox sidebar) and WOW, this is just right for the way mah brain works.

As for Evernote, I rely on it for everything. Or so I thought. Now I see all sorts of new bits of recordkeeping I can shift over there. Very pleased.