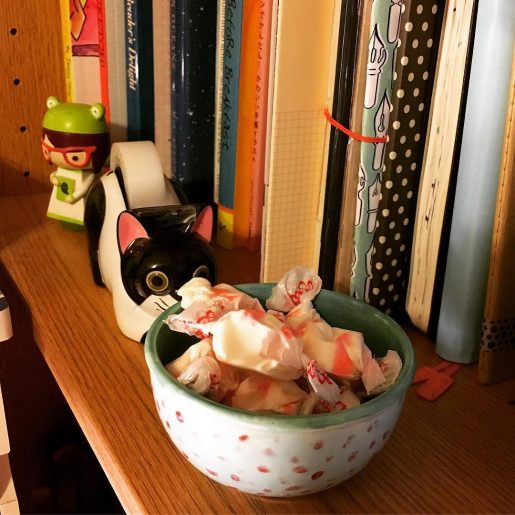 Up before dawn to comfort a sobbing seven-year-old who awoke to the sad realization that he fell asleep before the New Year arrived. We cuddled on the couch for a long while, chattering (him) and murmuring (me). Then I let him play Minecraft for a bit so I could get more sleep.

Late morning: bacon sizzle drifting down the hall. Mmm. Scott served a New Year’s breakfast of eggs, bacon, and almond bear claw. The younger kids and I sat down together and had devoured second helpings before the first teenager made an appearance. Excellent way to start the year. Everyone was singing Moses Supposes His Toeses Are Roses all day due to last night’s viewing of Singing in the Rain.

Early afternoon: my annual New Year’s Day cleaning frenzy. I didn’t realize I was singing “It’s the most wonderful time of the year” until Jane chuckled at me. She says I always sing that on this day. It’s true: I love fresh starts. I love packing away Christmas and sorting through books in preparation for a new season. Sometimes I get carried away—I have mouse-cookie syndrome something fierce—and commence a heavy-duty purge. This year I seem to have gotten the pattern backwards: I started by reorganizing the boys’ dresser and wound up purging shelves in the laundry room and cleaning out under my bed. The bed part was a continuation of yesterday’s grand overhaul of my desk and all my art supplies. I keep bins of paper and ephemera under the bed, and they wanted tidying.

Then I rallied the kids to help me take down the Christmas tree and decorations. I never can last the full Twelve Days. Too much depends upon that clean, fresh January first beginning.

Scott, my hero, remembered to soak the black-eyed peas last night, and all afternoon they were simmering away with a hambone. Just before dinner, I rounded up my younger set for a readaloud. Since my last little guy is about to turn eight, I want to read our way through all our favorite picture books before my picture-book audience is grown. Of course you’re never too old for a picture book, but you know how it is. They do grow up, these children. 🙂 I just don’t want to blink and realize Huck is twelve and has never heard Borreguita and the Coyote.

At dinner we discussed goals and resolutions for the coming year. Lots of “I’d like to learn __” plans. 🙂 My own goals—besides the picture book readalouds—are to sort through all our books and pare down by rather a lot; and to continue my daily sketchbook habit.

Speaking of which: I haven’t picked up a pen today. Better get to it!

P.S. Cybils finalist lists are out!