In her eagerness she did not realize how queer the words would sound and that they were not the ones she had meant to say. Mr. Craven looked quite startled.

I’m laughing at myself. I was reading over some of my garden-notes posts, and the way I go on, “my garden” this and “my garden” that, you’d think I was describing some vast Martha Stewart-esque estate. Um, y’all know I’m talking about a small suburban backyard, don’t you? I mean, I know I’ve described where we live in other posts, how this house we’re renting is about half the size of our Virginia place, and the lot size is your standard bitty-slice-o-ground. Just before we moved in, the owners (who are some of the nicest people you’ll ever meet) put down some wonderfully thick sod in the back, so we’ve got a nice place for the kids to play, and there’s a patio and a fence. But the grass was all there was in back (in a climate like this, that’s a lot!). What trees there are, are on the other side of the fence. (Also on the other side of the fence: an elementary school, which cracks me up.)

Our neighbor to the north put up a rather high concrete-block wall between our houses. It’s veryclose to the side of our house. You’ve seen it here before; remember when the kids decided to brighten it up with some sidewalk chalk? Between the grass and the back fence, running the width of the yard, is an area about six feet wide that was bare dirt and weeds when we moved in.

The owners let us put down mulch to keep the weeds at bay, and my mother helped me plant some flowers there. Whenever I talk about “my garden,” that’s what I mean. That and a long concrete planter built into the patio against the house wall. The geraniums and lambs-ear I posted a picture of the other day grow in the planter, and the poppies, and some lavender and thyme and a few other things. In the back mulch bed (that’s what we call it) are all the flowers I was gushing about yesterday. There’s a small square area on one side without mulch (where the wall meets the fence in the photo above); that’s the veggie garden my mom planted in January. It’s right up against the neighbor’s concrete wall and gets good southern exposure. The rest of the wall is bare and not what you would call attractive. I keep meaning to plant sunflower or cosmos seeds along the wall, something tall to cover it up a little, but the kids like having access to it for chalk drawings and bouncing tennis balls off of.

The south corner of the mulch bed is just bare mulch, with some determined Bermuda grass attempting to reclaim the territory. I keep meaning to plant cosmos and poppy seeds there, too. Seeds because they’re cheap and the plants are easy to remove if the homeowners should wish to, at some point. In between the bare-mulch corner and the veggie-garden corner are the sunflowers, the salvia, the ice plants and moss roses, the birdbath and bird feeder, the wandering jasmine, the daisies and cranesbill and strawberries. It sounds like a lot, but it’s all packed right in there together. So now you know when I gush about “my garden,” I’m talking about this one flowerbed. 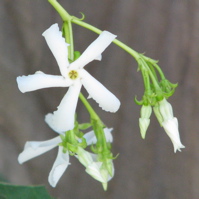 I know it’s a cliche, but I’m a huge believer in blooming where you’re planted. Or in this case, I suppose, making things bloom. Gosh, I love to go out in the golden afternoons, the green mornings, and stand among those flowers and just breathe. Look. Listen. The thing about gardening is that it really does engage all your senses. There’s beauty to see and smell and taste and hear and feel. (Oh those velvety lambs-ear leaves! That sharp rush of cilantro on the tongue! The white stars of jasmine perfuming the evening!) There is so much peace there, where things are growing. And so many stories unfolding all around you. The busy insects, the treasured bees, the gossiping birds. The ants have been working for two days on removing a dead worm to their underground storehouses. The armies of aphids have vanished from the pincushion flowers’ stalks, and a lone ladybug quietly trundles up and down the slender stems. I could swear the mockingbird singing a rhapsody in blue on the wire above the concrete wall is showing off just for me.

I made friends with a mockingbird once, our first year in Virginia. I was digging out a flowerbed and kept coming upon fat white grubs all curled up in stasis, horrible things, and I would flick each one off my trowel onto the grass a little way away, and the mockingbird would swoop down and gobble it up. After a few days like this, it used to perch nearby whenever I was working in the yard, watching me, expecting more snacks. I felt like Mary Lennox befriending the robin. But this was no Secret Garden, just another run-of-the-mill suburban backyard. I loved helping to transform it to something unique and lovely (albeit always jungly and weed-plagued) during the five years it was ours. I am loving, now, the coming-alive of this borrowed patch of ground, loving it with a joy as raw and childlike as Mary’s joy when she was given leave to do what she liked in her own “bit of earth.” She found a secret Eden, but it wouldn’t have mattered, really, if all she’d had was a corner of the kitchen garden. There’s magic in every bit of earth.