What I read today: the weekend and Monday 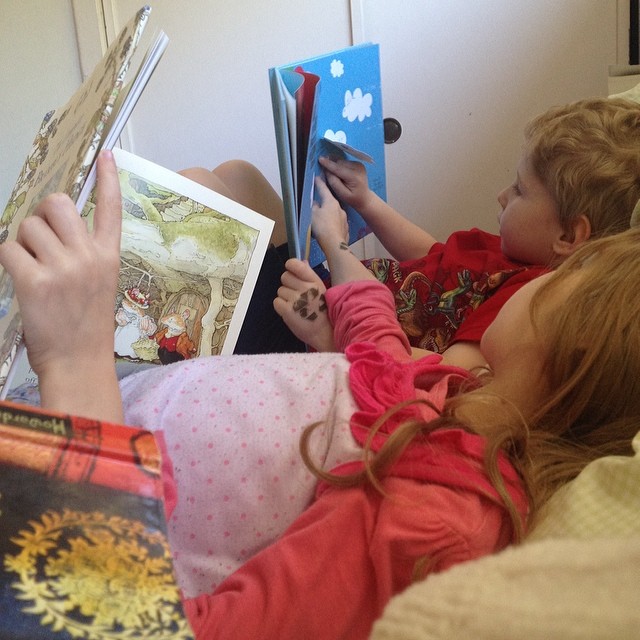 I lingered in bed yesterday morning—though linger is relative when the day begins around six, weekend or no—and the little ones saw me snuggled up, reading, and wanted in on the fun. I can’t say I got much of my own book read after that, but I have no regrets.

I’m moseying my way through Howards End Is on the Landing, enjoying it very much, the first chapter’s internet-grumping notwithstanding. It would be easy to come out of this book with another long list of books and authors to explore, and yet the author’s focus on spending a year reading only the books she already owns serves to discourage the impulse to start compiling. She keeps reminding me how much I have lying around the house already, or gobbling up the memory on my Kindle. I’m resisting the temptation to list. If any of her favorites stick with me after I’ve finished, I’ll hunt them up.

My favorite bits are the passages where she talks about encounters with other, older authors she admires. Susan Hill is in her early 70s, was first published at 18, has been part of England’s literary life since she was very young. She writes of one memorable encounter in a library while she was a student:

Not, though, as conscious as I was of the small man with thinning hair and a melancholy moustache who dropped a book on my foot in the Elizabethan Poetry section some weeks later. There was a small flurry of exclamations and apology and demur as I bent down, painful foot notwithstanding, picked up the book and handed it back to the elderly gentleman—and found myself looking into the watery eyes of E.M. Forster. How to explain the impact of that moment? How to stand and smile and say nothing, when through my head ran the opening lines of Howards End, ‘One may as well begin with Helen’s letters’, alongside vivid images from the Marabar Caves of A Passage to India? How to take in that here, in a small space among old volumes and a moment when time stood still, was a man who had been an intimate friend of Virginia Woolf? He wore a tweed jacket. He wore, I think, spectacles that had slipped down his nose. He seemed slightly stooping and wholly unmemorable and I have remembered everything about him for nearly fifty years.

I went back to the hostel and took out Where Angels Fear to Tread, read some pages, read the author biography, and had that sense of unreality that comes only a few times in one’s life. The wonder of the encounter has never faded. Nor, indeed, has the wonder of bumping into T.S. Eliot on the front doorstep of a house in Highgate, though, strangely, I cannot now remember whose house, but there was a literary party to which I had been invited by some kind patron of young writers. So there I stood, while Eliot rang the bell and gave me a rather owlish but kindly smile as we waited. Once the door was opened to us he was absorbed into the throng and I saw him no more—but I can certainly still hear the voice of someone saying, on seeing him, ‘Oh good, here’s Possum!’

I think my favorite quote so far comes from a conversation with her elderly friend, the poet Charles Causeley:

Shortly after receiving the Heywood Hill Prize, he was made a Companion of Literature by the Royal Society of Literature, a rare honour, and asked me, again, to accept on his behalf. ‘What would you like me to say?’ I asked.

The reply might well have been: ‘What an honour.’ Or perhaps, ‘What a surprise …’ But one of our greatest living poets, aged eighty-three, asked me to say, ‘My goodness, what an encouragement.’

I didn’t do so well with Middlemarch these past few days. The thing about reading something smart when I first wake up, while my brain is still wanting to drift back into whatever dream was dispelled by the sound of thumping boy-feet outside my door, is that I’m not always up to the intellectual effort required to stay attuned to the page. This morning I woke up twenty minutes after I started reading, with the phone gone black-screened in my hand. Lydgate something something promising young man something.

Things I read with kids today:

Landmark History of the American People, second half of the Eli Whitney chapter. I’ve read it before and forgotten it: the cotton gin sticks, obviously, but I’d lost the whole tale of how he invented mass production by transforming the process of how guns were made. Before Whitney, guns, like everything else, were made by specialist craftsmen, one at a time. In 1798 (I think—dates don’t stick to me) with Napoleon scaring the pants off everyone, a terrified young America was desperate for arms. Whitney’s cotton gin had transformed the entire economy of the South (for better or worse) and he was asked to turn his brilliant mechanical mind to the problem of how a country short on gunsmiths could generate vast quantities of guns. He reasoned that there were fifty parts to a musket, and if you could teach fifty men to make one part each—perfectly uniform, every time—you could assemble a great deal of guns in much less time that it takes one man to craft fifty separate parts by hand, over and over. Fast forward a few years through his creation of some molds, some part-making machinery, and there he is in a room with Pres. Adams, Vice Pres. Jefferson, and most of the Cabinet, with heaps of gun parts piled on a table. Go ahead, put some muskets together, he instructs them. Voila, mass production. (Now that I’ve narrated it, it oughta stick.)

Story of Science, finished the Keppler chapter. Watched a couple of Youtube videos afterward to help us grasp his Laws of Planetary Motion. Rose was most intrigued by the part about how DNA researchers in 1991 used clippings from Tycho Brahe’s mustache (!) to discover that he died of mercury poisoning.

Poem: “The Distances” by Henry Rago. “The house…billows with night” took my breath away. And the “rings and rings of stars” was a perfect and serendipitous cap to our Keppler conversation.

Also, these lines from Donne, quoted in the science book:

And new philosophy calls all in doubt,
The element of fire is quite put out,
The sun is lost, and th’earth, and no man’s wit
Can well direct him where to look for it.

(From “An Anatomy of the World,” although I could swear the Hakim book cited “The Anniversary” instead. Will check tomorrow if I remember.)

Tags: booknotes, Howards End Is on the Landing, Susan Hill, what I read today