Books the teenager has enjoyed recently

I think I should tackle the “what’s Jane reading these days” questions next. I’ve been asked for YA book recommendations from multiple friends and readers lately, and Jane said I could crib from her reading log. She reads way more than I do, so there’s a lot of stuff on there I haven’t read myself and am itching to—she has intriguing tastes!

• Shadows on the Gulf (oil spill aftermath and other threats to the Gulf wetlands);

• The Living Shore (a hunt for rare oysters leads to a deep appreciation of the magic of coastal ecology and how shorelines have helped shape human history).

They’re still on my nightstand awaiting the end of Shakespeare Club, but Jane borrowed them one by one and said they’re all fascinating. She came running out and read me a passage from American Terroir, and said, “Isn’t he just the best writer?” (His Fruitless Fall and Chocolate Unwrapped certainly captivated me.)

Let’s see, what else…she loves mysteries and has read just about all of Arthur Conan Doyle, Agatha Christie, and Dorothy Sayers. Big fan of Josephine Tey (see my Daughter of Time review) and the Flavia de Luce mysteries by Alan Bradley. (Here’s a post I wrote on the first Flavia de Luce, The Sweetness at the Bottom of the Pie.) And she is especially keen on the Case Closed series: Japanese detective manga by Gosho Aoyama.

Another big hit recently was Girl Genius, a webcomic (some of which is collected into graphic novel collections) and set of novels. We met the author at the Steampunk Convention and the look of the books caught Jane’s eye. She has since devoured the entire eight-and-a-half years’ worth of webcomic archives.

Connie Willis—The Doomsday Book; To Say Nothing of the Dog (and I myself am wild about both of these—the former moving, rich, sad, suspenseful: a female grad student time-travels to the Middle Ages; the latter screamingly funny: an endearingly inept male grad student time-travels to the Victorian era and gets in all manner of comedic scrapes with the locals).

Shannon Hale’s fantasy novels—Forest Born, River Secrets, Book of a Thousand Days, and others—are popular with both my older girls, and our copies are in nearly constant circulation with their friends.

Death by Black Hole by Neil deGrasse Tyson. This was mentioned in the third Penderwicks book and she recognized the author’s name as the host of the NOVA tv show. She says she’d like to read more of his work.

The Beak of the Finch: A Story of Evolution in Our Time by Jonathan Weiner.

A Short History of Nearly Everything by Bill Bryson.

You know I have to mention the Maud Hart Lovelace books. Ain’t just me: I see Jane (and friends) pulling them off the shelf on a regular basis.

The Throne of Fire, sequel to The Red Pyramid by Rick Riordan. Jane likes the Percy Jackson books better, but Rose is partial to the Egyptian pantheon as portrayed in the Kane Chronicles.

James Herriot’s All Creatures Great and Small & the others in that series. (Such love!)

Ender’s Game by Orson Scott Card. Mature language, barracks humor, violence. And, as Mental Multivitamin put it, “a can’t-miss.” Jane told me recently that she can’t imagine growing up without it.

A caveat about this list: every parent I’ve ever known draws his or her “appropriate reading material” lines in different places. Mine may not be in the same place as yours. Jane is sixteen, and we don’t monitor her book choices the way we do for kids thirteen and under.

The Actor & the Housewife: Open Thread

I know not many of you have had a chance to read it yet, but I’ve had a couple of requests for discussion of this book, so I’ll go ahead and open a post for it now. Chime in when you can!

You can read the first chapter at author Shannon Hale’s website.

WARNING: There will very likely be spoilers in the comments below, since it’s difficult to discuss any book without discussing its plot. That’s why I’d rather do most of my book-talking in the comments rather than in a post. These open threads are an attempt at a compromise between my oh-I-just-read-this-and-am-dying-to-talk-about-it urges and my deep abhorrence of plot spoilers. Read on at your own risk.

Tags: book discussion, Shannon Hale, The Actor and the Housewife 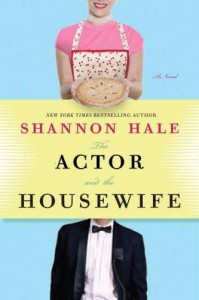