Last Friday Jane and her friends had the great fun of making blankets together for a service project headed by my sweet and generous friend Katie. All the volunteers were sent home with giant bags of fabric, fleece and cotton, to be used in making more blankets for the pro-life center and anything else the girls want to tackle for themselves or their families. Jane spent the weekend making fleece blankets and pillows, some knotted, some hand-sewn. I promised to work on making a space for her to have easy access to the sewing machine: all three big girls very much want to learn to sew, really sew, on the machine. So that was Monday’s project: finishing the big overhaul of the craft room that I started while the girls were in Colorado.

What I had done while they were gone was: tidy and reorganize the shelves, especially the craft-supply shelves under the window. Now it was time to tackle the closet. Jane was on hand to bag the trash I pitched onto the floor behind me. One of the first treasures I unearthed was a big book of placemats to color in, a German publication I remembering buying two-for-a-dollar at a Hearthsong sale many years ago. This felicitous find kept Beanie busy for most of the day, perched at the table behind me in the middle of the craft room. And Rose worked her magic on the little ones, entertaining them, guarding them from harm, answering countless requests for the refilling of sippy cups.

About this “craft room.” It ought sensibly to be a bedroom. We are (for now) seven people in a 1700-square-foot house. Rilla still sleeps in my bed. She’ll most likely move to a toddler bed next to mine sometime before the baby comes. That’s been our pattern with all the others and it has worked beautifully four times. Wonderboy has his own room, sort of: it’s also Scott’s office and laundry-folding center, and the boy’s closet absorbs a lot of the overflow from the rest of the house. The three older girls share a bedroom, from which we can hear them giggling and talking until late into the night.

The craft room (I call it that because it’s where the girls do most of their drawing and painting and Sculpey-ing and snipping of tiny bits of paper for their own inscrutable purposes) has three tall bookcases full of kids’ books, one tall bookcase full of Scott’s CDs, a fifth tall bookcase half full of more books and, until yesterday, half full of craftsy overflow such as crumpled origami paper, dried-up glue sticks, and eraserless pencils. We must make a lot of mistakes around here, because never in my life have I seen so many pencils with erasers worn away to the metal.

There’s a small desk in the craft room amid all the bookcases. This used to be my desk—since college days, actually—but in this house I wanted to make sure Jane had a corner all her own, so it’s her desk now. She has my old laptop set up there (no internet access, unfortunately—it’s too old for anything but dial-up) as well as all her beading, crocheting, sewing, paperfolding, etc, supplies. What we did on Monday was clear off some shelves beside the desk for her personal use and add a small end table in the corner for the laptop to go on when she wants the desk clear for sewing. And we moved the sewing machine to her desk. Jane’s in heaven.

Rose has long wanted a desk of her own too, and as soon as the dramatic emptying and organizing of the craft-room closet (you can imagine what it looked like before) was complete, she claimed her nook. We have an old children’s table from IKEA in there—I was using it as a kind of shelf. It’s Rose’s desk now, and I think what she loves about it is that it is inside the closet. Safe from sneaky spies, you understand, and prying toddler hands. She found a chair that fits the table and discovered she can store it on the table when the closet door is closed.

Beanie does not yet crave a desk of her own. “I like to be wherever you are, Mommy,” she says, causing me to kiss her all over her face.

Yesterday, Tuesday, we tackled the laundry room and Wonderboy’s room. Stunning progress, if I do say so myself. It may be the last boastful thing I’ll say all week, because the San Diego Comicon begins today (at least, Scott’s work-required wining and dining of the talent does), and just knowing I’m on bedtime duty for the next three days has already sapped all my energy. Also I have to go grocery shopping today and you know how that brings out the wilting lily in me. Do you hear that swell of sad violins? Waaah…

But my marvelous mama arrives bright and early Saturday morning and then I’ll become, for the weekend, a Mary Lennox’s mother kind of mother, gadding off to parties with an airy farewell wave of the hand. Okay, maybe that’s overstating a bit. (Tangent: a Rose quote from the other day: “Mom, I can definitely tell that Rilla is our baby. She’s prone to hyperbole just like you and Daddy. I just offered her a drink of water and she was grumpy and shouted, ‘NO! I never gon’ have water a-more!”) 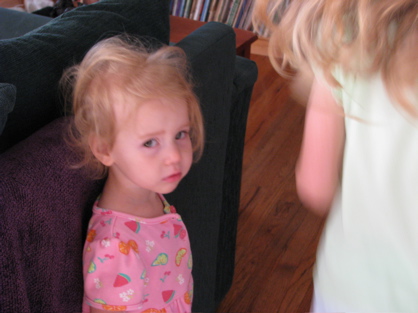 Poor Rilla. Is it her fault she’s not a morning person?

Anyway, so maybe I won’t be quite as bad as Mrs. Lennox, but I do plan to spend a good bit of time at Con-related festivities. That’s the whole entire reason my mother is flying out here this weekend. Isn’t she the best? (And that, my friends, is no hyperbole.)

Ahead today: Shakespeare Club. I hope. In my closet-cleaning frenzy yesterday I forgot to send out a reminder email to the other moms. Even Mrs. Lennox had better manners than that.