And I was only there for half of it.

Whew. As has always been my comic book convention experience, the weekend was exhausting but sooo much fun. That it fell on this particular weekend was a bummer, though, because a bunch of my girlfriends were at an entirely different conference on the other side of the country, and I (sob) could not be in two places at once.

Looking at all the beautiful pictures from the FCL Conference gave me such a smile, because talk about a study in contrasts! Here’s what their weekend looked like. 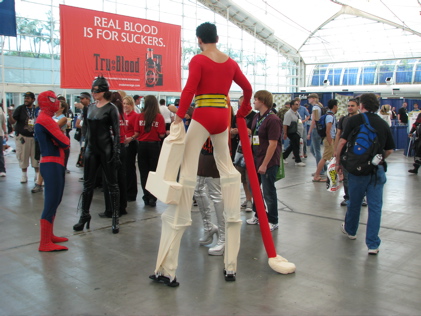 Scott had to work at the con Wednesday night, Thursday, Friday, and through the weekend. My mother arrived bright and early Saturday morning, and I brought her home from the airport, gave her a hug, and abandoned her with the children for the next two days. More or less.

On Saturday, while Scott worked at the WildStorm booth and did portfolio review and all that editor stuff they pay him for, I strolled up and down the convention center taking in the sights. There is always a lot to take in. 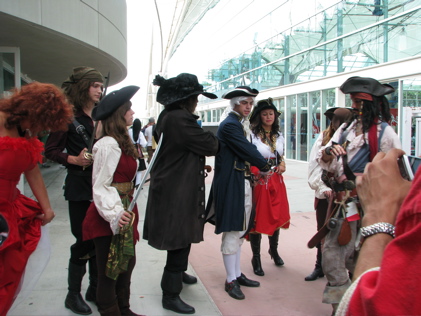 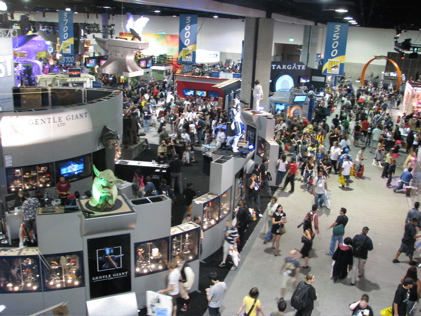 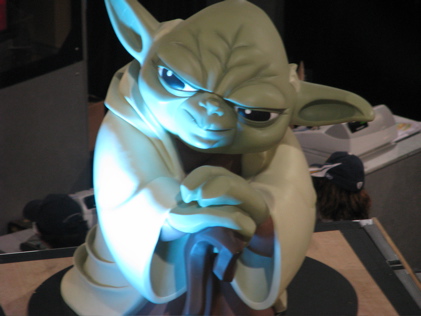 Saw eye to eye, Yoda and I did.

After a while, you’ve seen so much it all becomes a blur. 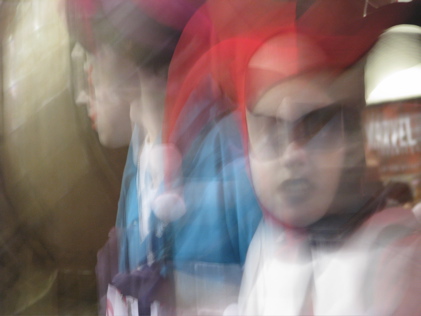 Sometimes you just need to sit down and take a little breather. 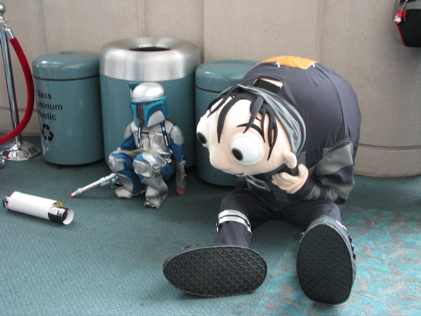 Fortunately, Scott got a late lunch break just in time for us to hook up with our beloved (and gorgeous) college friend Kristen, her husband Vinny, and Vinny’s Attack of the Show co-producer, Joshua. We survived the cattle crossing that is the big intersection right outside the convention center 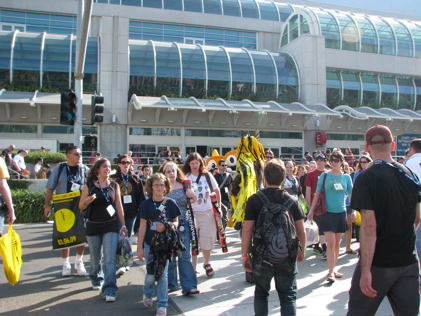 and wandered into the Gaslamp District in search of a good place to eat.

Speaking of cattle crossings, we passed these characters just hanging out on a streetcorner. 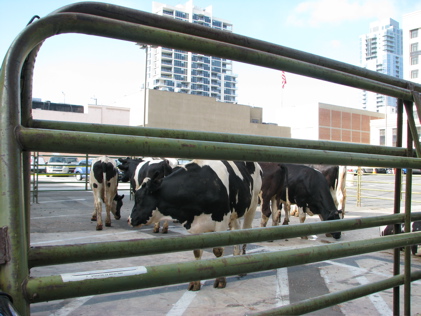 Rumor has it they were a promo for the TV show Fringe.

The restaurant that boasted of having award-winning meatloaf had a 45-minute wait, so hmph to them. We found ourselves at Fred’s Mexican Cafe, and oh my goodness. The complimentary chips and salsa were so good they nearly made us weep.

Kristen took this picture of me basking in post-salsa contentment. 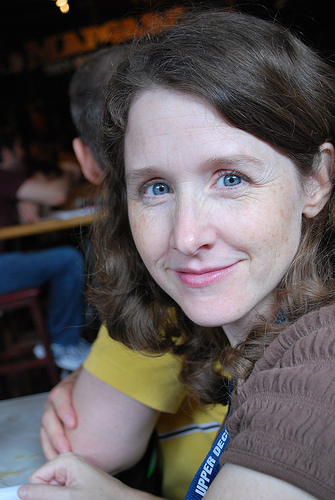 She also got much better Comic-Con pix than I did.

After stuffing ourselves with cajun shrimp tacos (oh. my. goodness.) and carnitas burritos, we waddled back down the street toward the Con. OK, I waddled. Scott had to dash ahead to get back for booth duty. Kristen and I took our time. We passed Joss Whedon on the street. Kristen greeted him with what is now my favorite greeting ever. (“Hey, Joss Whedon! Yay!”) He grinned. Then we reached Kristen’s hotel and said a weepy goodbye. L.A. is just too dang far away. At least, as the car drives.

Back to the Con for me, where I visited artist friends until Scott was finished at the booth. Tim Sale shook his head in amazement at the news that we are expecting again. I told him we figure there won’t be any Social Security by the time we’re old enough to draw it, so we’re making sure we have plenty of children around to take care of us. He said, “Good point. It’ll be an agrarian society by then anyway, so you’ll need all those kids to work the farm.” Ha.

It was around that time that I had a little bag crisis. The bag I’d brought with me (this delicious creation by Beauty That Moves) turned out to be just a leetle too small for the event. My camera was perched too near the top, just begging to be snatched. What choice did I have? There was this booth full of big ole bags with zippers, and one of them was lime green. Seriously, what choice did I have. OK. I admit it. I have a little problem when it comes to bags. In fact, just minutes later when my husband was introducing me to one of his favorite writers in the comics industry (Kelley Puckett, whom I’ve been hearing about—and reading—for fifteen years, but somehow had never met until this weekend!), he broke off in mid-sentence and said, “Hey, is that a new bag?” I said, “Hmm? What?” And he turned to Kelley and said, “My wife has only two flaws.” (He’s wrong about that, but it was sweet.) “Number one: her ridiculous affection for me. Number two: her compulsion for bags.” I can’t deny it. I am so thrifty and purchase-cautious when it comes to clothes and furniture and household items and pretty much everything except books and handbags. I mean, it’s not like I buy a bag a month or anything like that. But three or four a year, yeah, maybe. It’s a quest, see, for the perfect bag. As pretty as this one but with lots of pockets and a sturdy bottom and some kind of inherent magic that will make me always be able to locate my keys when I need to. That kind of bag.

Our Saturday evening wrapped up with what is for me the best part of a comic book convention. We wound up in the Hyatt bar eating appetizers and drinking beer (ginger ale for me) with a group of writers and artists. I love this, the jovial camaraderie and stimulating discussion of a community of creative colleagues. Our Barcelona pal Andy Diggle was there (but no Jock, alas), and Kelley Puckett joined us, and Fiona Staples (Scott’s artist on Jack Hawksmoor), and a bunch of WildStorm people, and assorted other folks wandering in and out. We stayed up talking too late and dragged ourselves home well past midnight.

And then poor Scott had to start all over at 9 a.m. on Sunday. I lingered at home, took the girls to Mass, played with my little ones. I didn’t want to take a second car into the convention-center madness, so I parked at the trolley station near our house and took the orange line downtown. And what an interesting trolley ride that was. I Twittered the experience (scroll down to “waiting for the trolley” and read upwards) and was probably lucky the Loud Girl didn’t know I was recording her rantings for all the internet to see. I told Scott you know it’s been a freaky train ride when it’s a relief to get back to all the nice, sane people at Comic-Con. 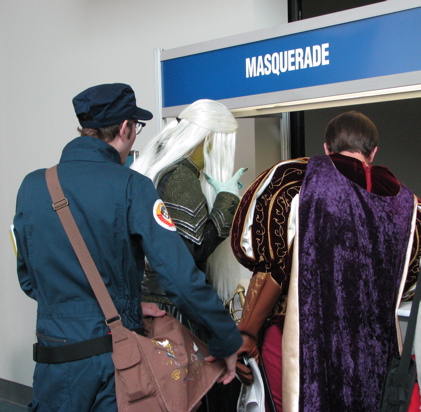 I am proud to say I bought no bags on Sunday (although the blue soldier guy’s messenger bag up there is kind of cute, isn’t it). I took in the sights and drank free DC Comics cranberry juice and met more nice artists and attended the WildStorm panel. And then it was back to the Hyatt for more food & fun with Fiona and Andy (but no Kelley this time) and Mike Costa and Neil Googe and other engaging, talented folks. Scott, Mike, Andy, and I spent a good three hours talking about the nature of story. That, my friends, is why I go to comic conventions.

Later we stopped by a party hosted by Mark Buckingham, Bill Willingham, and Matt Sturges, but I was too tired to stay long. My obliging hubby took me home where I snuggled up next to my baby who is no longer a baby and dreamed about absolutely nothing, because I was that wiped out.