Close Encounter of the Racklenake Kind 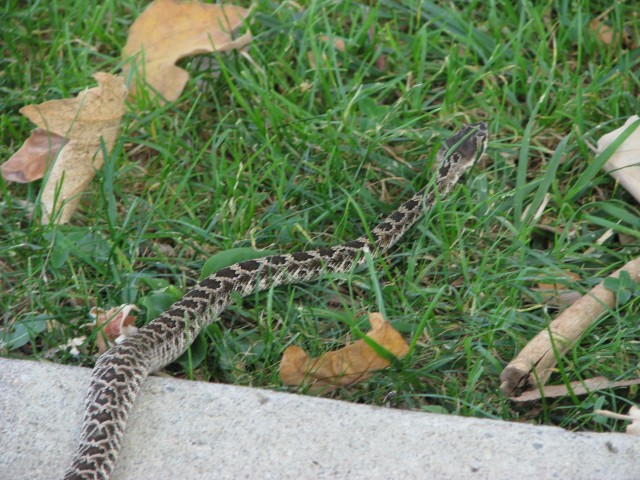 Yes, again. This is what happens when you build suburbs in the chaparral.

This time, we weren’t on a hiking trail in the hills. This time, we were running down the path from the water fountain to the playground at a park we only just discovered this morning. Upon arrival, I wrote Scott: “This is the best park I’ve seen since we moved here.” Beautiful place. Towering trees shading a narrow creek (more stones than water) and an elaborate playground—a welcome improvement on the sunbaked playgrounds we usually frequent. Enormous rocks for climbing, glorious golden hills rising up just beyond the park’s borders, a conveniently located restroom, a functioning water fountain. Before the first child had reached the top of the slide, I was envisioning a regular weekly park day at this heretofore undiscovered (by me, at least) gem. 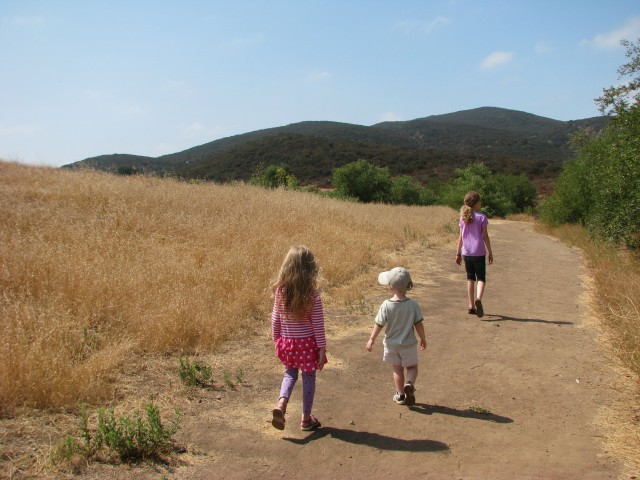 The kids ran around the playground for half an hour; Beanie spent a long time pushing Rilla on the swings. Then we meandered over to the creekbed, watched a squirrel, climbed a tree, and after a bit, I decided it was sunny enough on the trail beyond the park fence that we could risk a short walk. Too hot for rattlers on the path at that time of day, I reasoned. But Wonderboy was spooked by the memory of that other rattler, the big one we happened upon on a similar trail, and we turned back after a only a few minutes. Back to the swings, the rocks, the blissfully cool shade under the trees.

On the way to the water fountain, Huck complained of mulch in his shoes. I stripped them off: he’s happier barefoot. He raced up the short stretch of sidewalk between playground and fountain, following the others. I trailed behind, stepping over a few fallen leaves and scattered twigs. Drinks accomplished, we turned to head back to the playground. Huck was in front, still barefoot, and I registered that the stick he was about to jump over wasn’t a stick at all just as he did, in fact, jump over it. His chubby bare foot hit the ground about an inch from the slithering, diamonded, triangle-headed, rattle-having stick.

I screamed. Launched myself in front of Huck. It wasn’t a big rattler, and it was leaving the path in a hurry, heading for the aforementioned blissful shade under the trees. I backed the kids way up, looked around wildly for snake companions, because in my imagination they always come in packs—and then, yes, took a picture. I mean, I was already holding my camera, and it was clear the thing wanted to put some distance between itself and my pack of wild monkeys.

By this point the playground was filled with a group of day-camp kids who’d arrived for a picnic. I hustled my kids back toward the parking lot, stopping to alert the camp counselors to the presence of the snake. They put in a call to Animal Control and herded their charges to the cement-floored picnic area. The snake hung out under the swings—Rilla’s swing—for a bit and then changed its mind and hastened toward the tennis courts. A fire truck arrived. I had my kids back in the minivan by that point, but we hung around to watch the exciting capture. I explained the mechanism of the long pinch-handled snake-catching stick. The firemen returned to the truck and opened their bucket to display the furious, coiled, really not very large at all rattlesnake.

“Can we come back tomorrow?” asked Rilla.

Sure, honey, as long as it’s pouring rain.