Amazing how many things I love are crammed into this one blurry photo. 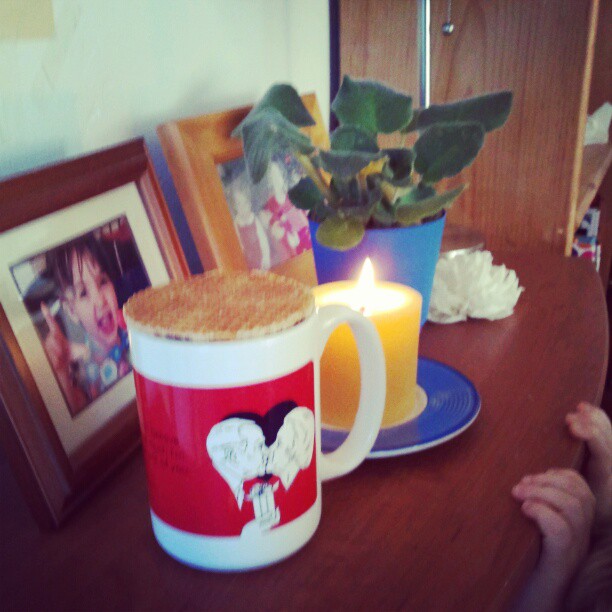 It was a quick snap with my phone to show Kristen I was properly enjoying the stroopwafel she brought me back from Amsterdam. There it is steaming over my cup of tea—red zinger with honey; ever since my cold last week, Scott’s been keeping my mug full. The mug was a present from him last Mother’s Day. “I can’t believe how much I’m not sick of you,” it says, which makes me laugh every time.

The candle is beeswax and smells like sunshine. The blue plate, oh, it’s one of the last remaining pieces of the stoneware we got for a wedding gift. I swooned over its lapis hue and cajoled Scott into putting it on our registry; he favored a simple white plate edged in red. The blue plates chipped something awful. All I have left are the saucers. Now we have sensible plain white restaurant china, very sturdy. And tucked away on a high shelf, two of the red-ringed plates Scott liked, which I added to the registry—just the two—for special-occasion dinners. Only it turned out our dinners, special occasion and otherwise, require a great many more plates than two.

My beloved goddaughter Vivi in the photo is signing my name: L for Auntie L. She’s Kristen’s daughter. I preached the virtues of signing with infants to Krissy, and the two of them fell in love with Signing Time and eventually even became friends with Rachel. Like, real-life friends. And Signing Time is so much a part of our family culture, and it’s all wrapped up in my mind with my friends Lisa and Sarah from Virginia, who found the first DVDs in our wonderful little branch library. I’d signed with all my babies, including Wonderboy, long before we knew he was hard of hearing. We used some rudimentary videos I’d picked up when Jane was little, but Signing Time was light-years better and became hugely important to us. So that’s all there in that photo of Vivi signing my name.

The other photo is my three oldest girls at Christmas the year Wonderboy was born. He’s only a few weeks old in the picture. Jane is holding him, and the way she’s tilting her head looks exactly like me in the author photo I was using at the time. My mother noticed it first, and my father made a side-by-side image that is really quite uncanny. The Christmas photo was taken in our house in Virginia, right in front of the bay window where the girls and I used to sit for lessons. Not long after we moved into that house, we looked out that window and saw cows ambling up the middle of the street. Cows. We’d moved from the New York metro area, so this was quite a culture shock for my wee girls.

In the top of the photo you can just barely see the corner of a picture Rilla drew around this time last year—her pictorial Christmas list, you see. A large ginger kitty occupies the page, above which a painstakingly block-printed caption reads “I WANT AN ORANGE CAD.”

The African violet is one of the set my mother gave me for Christmas a couple of years ago, after she read my big long gushing blog post about how much I adore them. The others are on a table across the room. There’s nearly always at least one in flower, if I remember to add plant food to the watering can. I love their velvety leaves and the blues and purples of their flowers, with those bright yellow centers. The bookcase itself, upon which everything rests, was a hand-me-down from a kind neighbor across the street. It’s loaded with favorite books—the Swallows and Amazon series, the Melendy quartet, our Nesbit collection, all sorts of treasures. The taller shelves next to it are one of several matching bookcases Scott and I bought the first year we were married, handmade by a Steinway Street craftsman in Astoria, Queens. We bought them unfinished and never did get around to staining them—we decided we liked them raw. Anyway, they were never not crammed full of books.

And the small fingers, reaching. The small boy watching the candle burn, yearning to blow it out, yearning to grab the pastry. So many of my photos seem to have stray fingers and toes in them, or wild locks of hair.

When the syrup inside the stroopwafel was perfectly melty, we broke it into pieces and shared it around.