SDCC Comics in the Library Panel

One of the best panels I attended at SDCC was Comics in the Library, moderated by Gina Gagliano of First Second Books, featuring four librarians from different parts of the country:

This is a writeup of my panel notes. I was writing quickly, so it’s possible I’ve made mistakes below—my apologies if so! 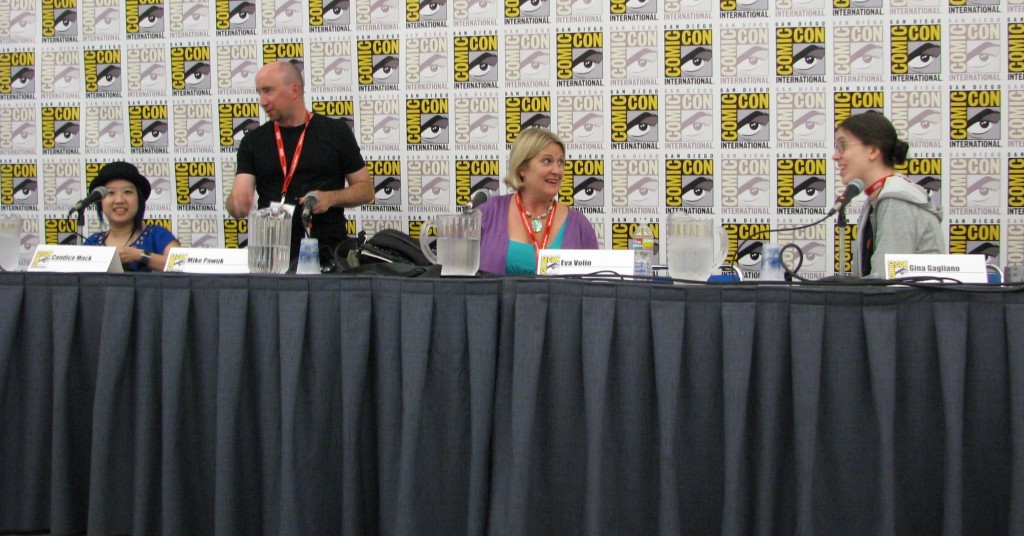 Gina opened the discussion by asking the panelists to tell us about the comics and graphic novel collections in their library systems.

Candice is at a different branch now, but in the branch where she built a graphic novel collection, she began by moving comics out of Dewey Decimal order to designated shelves in the teen section, with signs to point readers toward them. This had a big impact on circulation. Later in the panel, she described creating a reading lounge with sofas in the teen section near the comics/GN shelves. This became quite popular with kids.

Mike works in a system that has 27 branches containing about 4000 graphic novels & manga for teens. There are also GN sections in children’s & adult.

Eva‘s system (three branches) has GNs in all departments.

Gene‘s branch has an extensive teen collection. The adult collection has a few titles, Alan Moore, Garth Ennis. Some kids’ GNs are hidden with rest of kids’ books—except Babymouse which has its own shelf.

Eva mentioned one series that didn’t move at all in teens. She moved to the children’s section; now it’s never on the shelf—it is constantly checked out.

Gene talked about deciding where to shelve things, especially manga with mature content.

Eva (addressing the issue of whether some comics may be too mature for children) said it’s not a librarian’s job to tell your child what he can read—that is the parents’ job. She thinks the comics rating system isn’t useful: you have to read the books or look at reviews to get a feel for actual content.

Gene mentioned that in his branch, sometimes they wind up with books in all three sections.

Mike started the job in 1996. At that time, all his branch had was a few volumes of Sandman and Bone. He wanted to build a collection. He likes it best when staff can order titles for their own branches—they know their communities.

How to start a collection

Mike talked about what percent of the collection is GN. In his system, the 4000 GNs are about 12% of total circulation. Teen (prose) fiction is about 10%, also roughly 4000 titles.

Gene said that in 2000, his branch had one shelf of comics/GNs. He was given $6000 to build a GN collection with but had to use the money in one month. He was forced to choose quickly, went with a lot of things he liked personally but tried also to choose broadly, outside his tastes. The manga he ordered flew off the shelves.

Someone (whoops, no attribution in my notes) said that in his/her system there are roughly equal numbers of YA fiction and graphic novels. The difference is: “you never see the GNs.” They are in constant circulation.

Gene (I think) said that kids began coming to ask for specific titles. “They became a collection development resource.” This was especially the case with manga.

Eva said she’s lucky—she’s the supervisor in her branch, she was able to allocate the shelf space for GNs. She spoke about “weeding the collection,” removing books that don’t get checked out in order to make room for comics/GN shelving in front of the children’s department. For ages 0-8 (possible she said 8th grade), there wasn’t a lot to choose from, so she bought multiple copies.

I have a great quote with no attribution, but comes right after the Eva notes above, so it may be hers: “Our comics collection has made my library a destination point.”

Gina asked about how GNs are treated in the library. She said that some librarians see comics/GNs being treated differently by patrons: they may be read in the library more often; some say they are stolen more often.

Mike told a wonderful story about a kid who came into his branch—he is in a different branch now, not the one with the collection he described above—wanting bus directions to that other branch, the one where Mike built the collection. The teen said he’d heard it had a great comics section—so great he was willing to take a bus all the way across town.

Candice said the GN shelves are a highlight of her teen collection. This is when she described creating the lounge. She said a lot of kids don’t check comics out, they prefer to read them at the library.

Gene said (and other panelists nodded in agreement) that it is not uncommon for an adult patron to be negative: “Why do you spend my tax dollars on that crap?” Or parents will want their kids reading more ‘advanced’ books. He said he helps explain by telling his own story: he read comics first, as a kid—and he studied English lit in college and became a librarian. Comics create readers.

Eva said you can show stats on how reading comics builds vocab, helps kids learn to decode text and story.

Candice said she likes to point out how much kids are reading when they get into a manga series, for example. She named one series that has fifty volumes—“as many words as War and Peace,” she quipped.

Mike talked about how his branch promotes Free Comic Book Day (once a year comics shops give away a free comic to every visitor). Mike’s branch does a special tie-in with activities, and he reminds patrons that “every day is free comic book day at the library.” 🙂

Eva remarked that she sees many moms in the children’s section, but few dads—except on free comic book day. Then she sees lots of dads bringing their kids. And she’ll see many of those dads coming back later; she sees Free Comic Book Day as having great outreach potential.

Getting other staff members on board

Gina asked the panelists if they had advice for convincing skeptical staff members that comics are a worthy addition to a library collection.

Mike noted that his branch has a very small number of comics in the adult section and they can be hard to find.

Candice (I think; I don’t have a name written but I’m pretty sure it was she) said “put comics face out and they will check out.”

Gene said that when he started his “big buy” (that $6000 purchase he mentioned above), people panicked. He made it his mission to find the perfect comic for every staff member. He told a great story about one fellow staff member who was skeptical of comics but loves opera. Gene gave him P. Craig Russell’s graphic novel adaptation of Wagner’s Ring of the Nibelung. “He got it,” said Gene, describing how the man became instantly supportive of comics’ place in the library.

Gina asked the panelists to name a comic or graphic novel they liked. My notes here are sketchy; I didn’t properly record who recommended most of these titles. I’m pretty sure it was Eva who mentioned Jeff Smith’s classic Bone series (which my own kids adore), but I have no idea what “98%—Boneville” is supposed to mean. 😉 My cryptic notes then read: “comfortable set-up of jokes”—I think there Eva was talking about how accessible the Bone books are—and “Bone = gateway,” which I think could apply to kids, parents, and librarians too.

I did note that it was Mike who recommended Vera Brosgol’s eerie and wonderful (my words) Anya’s Ghost, a YA graphic novel published by First Second.

Someone (possibly also Mike?) spoke beautifully about The Photographer, a nonfiction graphic novel about Afghanistan, and there was some discussion of other strong nonfiction GNs. Eva praised Jonathan Hennessy’s excellent GN about the U.S. Constitution, a book I have raved about here myself. (I picked it up at last year’s SDCC and gave it to Jane, who devoured it.)

Someone else mentioned Rick Geary’s true crime comics, which sound interesting—here’s a review at Newsarama.

What I loved about this panel was the look behind the scenes into library collection development, an area I know nothing about. I think most of the the audience members were librarians—and presumably already comics lovers, since they were, after all, attending Comic-Con—but I think everyone in the room learned something from these lively, articulate panelists who spoke with an engaging passion about the merits of graphic novels and the joys and challenges of bringing them into a library collection. I keep thinking about that boy who wanted bus directions to the branch with the collection Mike Pawuk had worked so hard to build: that is one dedicated reader, and his determination speaks to the tremendous appeal of this medium for kids and teens. I wish books like The United States Constitution, Smile, American Born Chinese, and Girl Genius had been in the library when I was a kid—I would absolutely have considered them worth a trip on a crosstown bus.