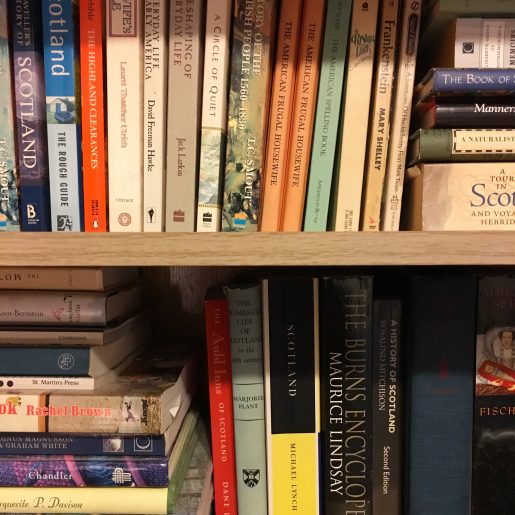 There. I’ve been through every book in the house. There are hundreds stacked up, ready to be donated, just as soon as someone who wants them shows up with boxes. Thousands more survived this round of cuts, and I’m itching to curl up *right this minute* with about 80% of those. (Insert despairing cackle.)

I’m steeling myself to let some of the weaving books go. Some were reference for writing the Martha books; others were instructional for my own rookie efforts. I’m going to let Spinning and Weaving With Wool and the big book on linen find homes with someone else. (Sitting here writing this post, I couldn’t remember the exact title of the linen book. Then I remembered I probably ordered it from Amazon. And sure enough, there it is in my order history. From 1998.

One notable observation we made while culling the collection was how many books could be let go due to our now relying on the internet for their kind of content. Informational texts, science projects, cookbooks. (Okay, but I did keep Lotions, Potions, and Slime—I don’t care if you can find all those activities on Pinterest now; that book has family history.) If I ever need to know how to finesse linen in a handloom again, I’ll Google it.

Last night’s picture book: Mr. Wuffles by David Wiesner. So good. Huck was initially baffled by the strange alphabets of the aliens’ and insects’ languages, but as soon as he wrapped his head around the concept, boy did he enjoy interpreting the dialogue. He started over again as soon as we finished, and then he took it to bed with him. I love experiencing a wordless picture book with a child—how his trepidation gives way to glee as he gets into the spirit of the ‘reading.’

My favorite parts of this book are the ‘cave paintings’—the insects’ murals on the wall under the radiator, dep

icting the history of brave stands the ants and ladybugs have made against the fearsome feline attacker. The detail is remarkable, and you get the fun of deciphering another wordless story within the wordless story.

I finally got my 2016 booklog up to date (more or less—not everything’s linked up, but the titles are all there). I may have to declare Goodreads bankruptcy, though, and just begin fresh with 2017. (Which is what I wound up doing last year.) It takes too long to click through all the layers of search new book—add new book—choose shelves—set start and finish dates when you’re doing it for dozens of books at once. Will I keep up as I go next year? Probably not.

Consider this a PSA—Creativebug is running a special: one month of free unlimited access. If you explore my Creativebug tag you’ll see how much enjoyment my family wrings out of our $4.95/month subscription. (affiliate link, but only because I’m a happy customer)