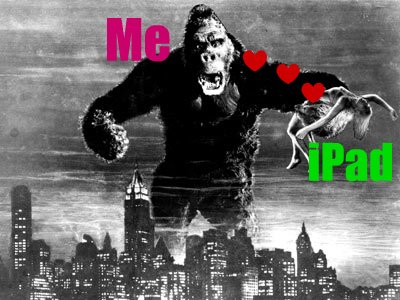 In Praise of Keyboarding

Monica Edinger has updated a post she wrote five years ago about technology in the classroom. I was particularly struck by this bit (emphasis mine):

Fortunately, as I described in my 1994 article, my students quickly proved the worth of this purchase.  Given the choice between writing with a pencil and writing on a portable word processor, most soon preferred the latter.  Initial frustrations due to minimal keyboarding skills and technical knowledge gave way to delight as the children discovered how much easier it was to plan, draft, revise, and proofread their work.  Students became much more independent as they discovered that they could move around text, add and subtract information, and even correct spelling without adult help.  The level of their writing soared now that the arduous nature of handwriting had been removed.  More children began seeing themselves as serious writers, taking their portable word processors out during free time to write stories on their own.  It was clear that the introduction of the word processors had been a great success.

This speaks to something I tell people all the time when they are expressing frustration over problems with getting kids to write. From the time I was tiny, I loved to think up stories (my mom saved my very first story ever, “The Big Ice Cream,” which contains such scintillating dialogue as “Hi! Hi! Hi! Mommy!”) but I have never really enjoyed writing by hand. And by “never really enjoyed,” I mean I kind of loathe it. My wrist begins aching after just a few sentences. So all through grade school and middle school, I started lots of stories but abandoned most of them unfinished because I didn’t like the physical act of handwriting. In high school my folks gave me an electric typewriter, which changed everything. And when I graduated from high school, they gave me my first computer, a kickin’ Commodore 128. (You know you’re jealous.) Finally my fingers could keep up with my thoughts—and my poor, feeble little wrist needn’t be overtaxed ever again.

And of course the cut-and-paste function is the best thing to happen to writing since the alphabet.

So my advice to parents who’d like to see their kids doing more writing is to give them access to a word-processing program and a fun typing tutorial. (Beanie has enjoyed this one.) Handwriting is still an important and useful skill, but there’s no reason it must be tied to the creative act of writing—and may in fact stymie the process. I’m quite sure I’d never have become a novelist if I’d been forced to rely on my cantankerous wrist.

That Would Be the Other Kind

My friend Kristen sent the kids a box full of fun stuff: fairy wands, Slinkies, a board book for Huck to eat.

Says Rilla, about the wands: “They’re GORGEOUS. Now I can be a fairy all right.” (In a tone that conveyed she’s been waiting all her life for the opportunity.)

She inspects everyone else’s presents. “This is so great. Mommy, WHO are they from again?”

Rilla, head tilted, clearly puzzled: “You mean Krissy, my Polly Pocket? Or the other kind of Krissy?”

Since my dad’s fun family-photo coloring pages have garnered such an enthusiastic response (see especially Lori’s comment, which includes a link to a Crayola site that will let you make some of your own), I thought you might enjoy hearing about some of my father’s other grandkid-pleasing innovations.

One Christmas he gave us this set of custom-made placemats. Each laminated mat has a collage of family photos on one side. On the back sides, he made gorgeously colorful collages of other kinds of pictures—an array of his beautiful bird photos, for example (most of them taken in my parents’ backyard or ours). One is a nature collage; one is all kinds of art supplies. I can’t tell you how much my kids love these placemats. My littles use them almost daily underneath their dinner plates or drawing paper. 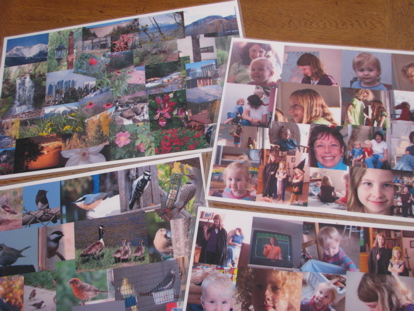 But I think Wonderboy’s special book takes the prize. My dad really outdid himself with this one. This was a present he gave to my boy a couple of years ago, and it is still one of Wonderboy’s favorite things to look at. Rilla too, actually. 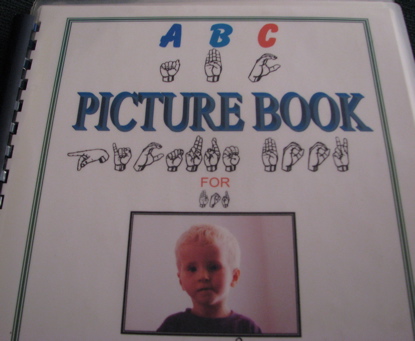 It’s a comb-bound, laminated alphabet book full of pictures of our extended family and objects from around our house. (My photos don’t do it justice.) My dad included both English and ASL fingerspelling letters for each word, which makes it all the more special (and useful) for my hard-of-hearing son. 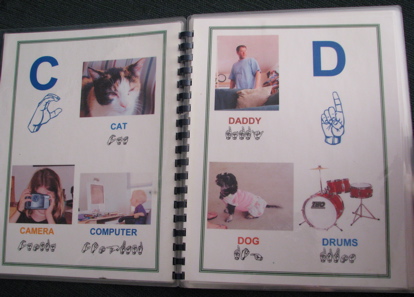 I love my dad’s choice of words to illustrate—you can tell he understands his grandson’s interests very well. 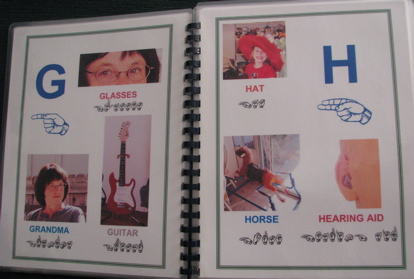 I know I’m gushing here, but, well, you understand, right?

The back cover is my favorite page. 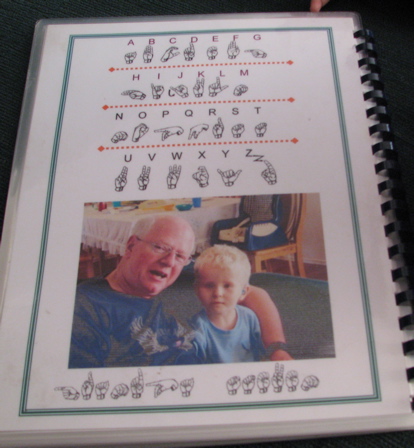 On another visit, my dad gave Wonderboy a second book, this one focusing on colors and numbers. I especially love this page illustrating the number 4— 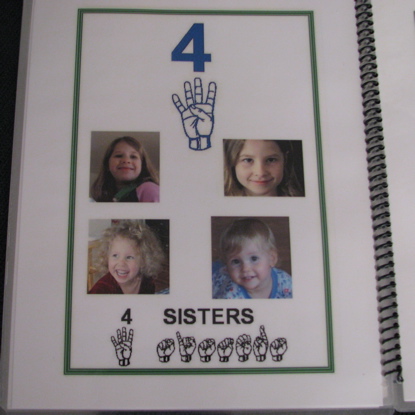 —but I would have to say my favorite is the Number 1 page. 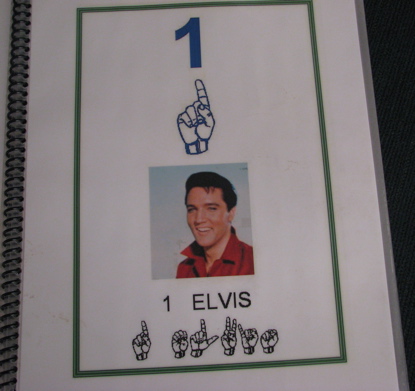 Like the wise man said, we can’t help falling in love…with you, Grandpa. 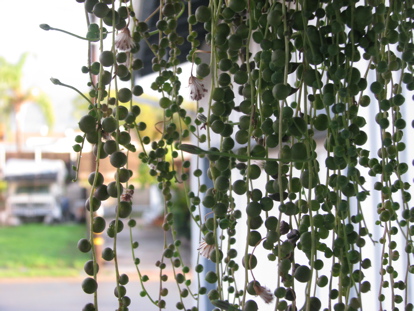 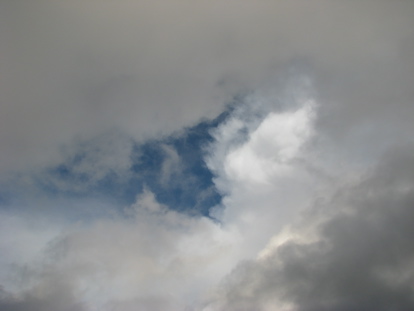 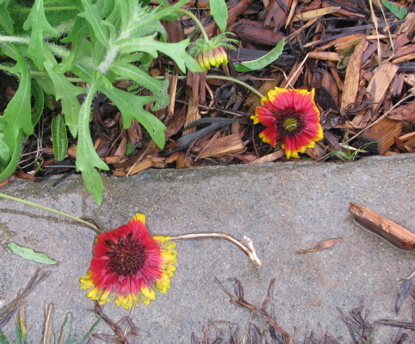 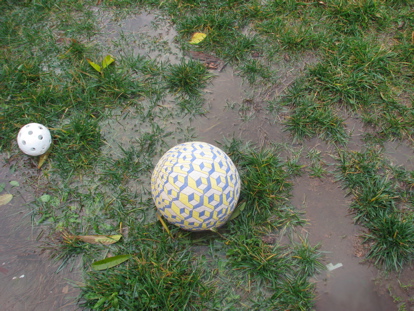 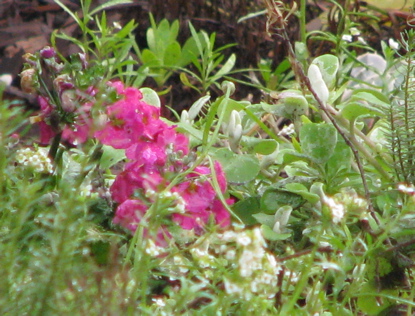 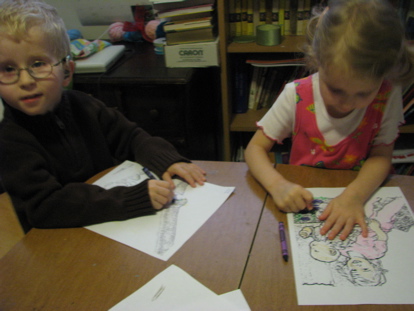 1. My beloved string-of-beads plant surprised me with blossoms.

2. After a week of storms, a delicious glimpse of blue.

3. The days of downpour left everything flattened.

6. My excellent father converted a bunch of family photos to coloring pages and emailed them to us for printing out. Rilla and Wonderboy were over the moon. A brilliant way to combat cabin fever. Well done, Grandpa!