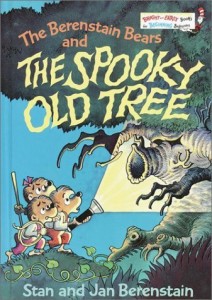 No “Recently Read to Rilla” post this week because almost all of her recent choices were books I’ve already written about—or else classics like CAPS FOR SALE or THE BERENSTAIN BEARS AND THE SPOOKY OLD TREE. (A perfectly written early reader, by the way. Masterful in its simplicity and sense of fun. Beginning readers are doggone hard to write: every syllable must count.)

An addendum to last week’s notes on THE COW LOVES COOKIES: when she found out it had gone back to the library, she burst into tears. So, yeah, I guess you could say she liked it.

Speaking of high praise, have you seen this delightful review of the uberdelightful SHARK VS TRAIN?  I mean, Shark Bersuz Train.

(You know how much we adore that book.)

I’m a little annoyed that I keep forgetting to scoop our funny kid-quips from Twitter and tuck them away here for safekeeping. Recent lines I do not wish to forget:

Overheard: “Today I am a guinea pig named Primrose.”

I’m sitting with my feet up. Rilla climbs onto my legs, sighs wistfully: “I wish I could hang upside down from you like a Chihuahua.”

A sentence you don’t hear every day: “Mommy, do we have a narwhal?”

I’m pretty sure I am hearing Scott explain the rules of Fight Club to the two-year-old.