These are books Rilla has wanted to hear over and over this week. One of them was written by a beloved friend of mine, but honestly that’s a coincidence—Rilla (alas) has never actually met Ellen in person, and I don’t know that she remembers her Lola book was written by Mommy’s pal. 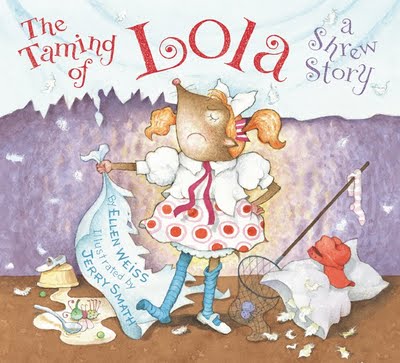 The Taming of Lola by Ellen Weiss, illustrated by Jerry Smath

You may recall that I wrote about Lola when I interviewed Ellen Weiss last year. Rilla rediscovered the book recently and is completely enchanted with this bratty little shrew. I mean:

“If Lola was given mayflies for breakfast when she wanted slugs, she had conniptions.”

Mayflies for breakfast? Conniptions? Prose like this, my friends, is how to win Rilla’s literary affections. She relishes the furious battles between Lola and her equally bratty cousin Lester (especially the name-calling); she is fascinated by the insect-dominant cuisine portrayed so charmingly by artist Jerry Smath; and she is downright crazy about the interjections of a certain crotchety grandmother shrew who is the narrator of this five-act tale about the summer Lola met her match.

(I don’t know what I was thinking, though, the day I launched into a spontaneous Barry Manilow parody out the outset of this book. I am now required to begin each reading with a performance of that timeless song, “Her name was Lola,/ she was a shrew-girl/ with stripey ribbons in her hair/ and a super-grumpy glare…”) 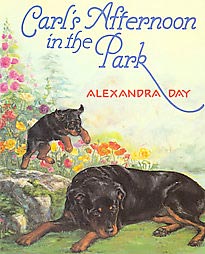 Carl’s Afternoon in the Park by Alexandra Day

This is my favorite of the Carl books. I think it’s the only one Rilla’s read—it’s the only one we own, I guess. I need to remember to put the others on our library list. I love the conversations we have when we’re reading wordless stories like this.

This particular Carl story, in which Good Dog Carl is left in charge of a rambunctious baby, is especially sweet because of the impish puppy who has also been left in Carl’s care. Our favorite bit is where the dogs and baby find themselves surrounded by half a dozen earnest artists, and we can see on the easels all the different art styles with which the various painters are portraying our friends. (My older kids enjoy that part too.) Rilla is also fond of the part where they look through binoculars, one gazing up, one down at the ground, and one off to the side, and then on the facing page you see the three views and can figure out who is viewing what.

The park itself looks an awful lot like our own favorite stomping grounds, Balboa Park! Anyone know if that’s what Alexandra Day had in mind? 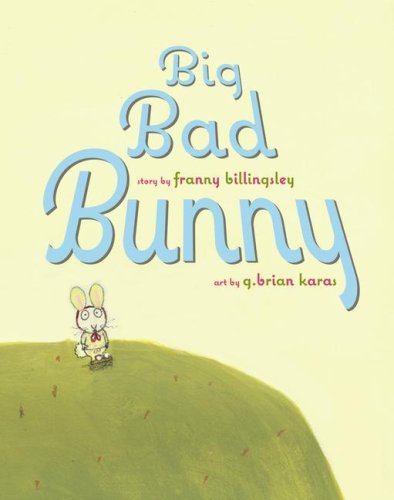 I wrote about this book in what I now realize must have been the very first Rillabooks post. Here’s what I said then, in February 2010:

This was one of the books I received for review as a Cybils panelist in 2008, and it was a hit with my family. Big Bad Bunny is on the loose, and Mama Mouse has just discovered her littlest mouse-baby is missing. She’ll brave any peril to find her baby—even Big Bad Bunny’s long sharp claws and fierce yellow teeth. Rilla loves the repetitive text and watches each page for the chance to shout “No!” when I ask if something will stop Mama Mouse. It’s very comforting, when you’re three, to know that Mama will face danger to find you and bring you safely home.

And here’s what I wrote today (somewhat ungrammatically) in my notes on Diigo: “I don’t know who is crazier about this book—me or Rilla. It’s a tie, I guess. She just loves it to pieces. Such suspense: will Mama Mouse find Baby Boo before Big Bad Bunny attacks with those sharp, scritchy claws? Hey wait, who IS Big Bad Bunny anyway? Rilla likes to do the sound effects (stomp, splash, skritch, pitter-pat) and she is positively in love with the page that reveals the truth about those bunny ears…”

My big bad boys are crazy about this one too.

Something new I’m going to try: I’m really enjoying the way these Rillabooks posts serve as a journal of my four-year-old’s literary experiences, but the record is somewhat incomplete because of the role of repetition in a small child’s romance with books. If we read, say, four picture books on a given day, odds are that two or three of them are repeats from earlier in the week. Me Hungry has been requested almost daily for weeks, for example. Also, in a house with this many big sisters and a work-at-home daddy, I’m far from the only person reading picture books aloud. So, in order to keep a complete record of Rilla’s reading, I’m going to start adding unannotated lists at the bottom of these Rillabooks posts, recording the titles of all the books we read that day—many of which will undoubtedly be repeats from the days and weeks before.

Books I read to Rilla today:

• The Little Rabbit by Jody Dunn
• Cherry the Pig by Utako Yamada
• The Poky Little Puppy by Janette Sebring Lowery
• Madeline by Ludwig Bemelmans
• Madeline and the Bad Hat, ditto
• and the aforementioned Big Bad Bunny

Scott is reading her the ever-popular My Father’s Dragon by Ruth Stiles Gannett—our family’s favorite choice for that first jump from picture books to a longer read-aloud with chapters (first mentioned on this blog in January 2007).

(Y’all keep writing to ask me to include affiliate links, which is incredibly sweet of you. Here are portal links, if you’re inclined to use them, but you know you’ll just be feeding my habit. My overstuffed shelves would appreciate it if you shopped at your local bookstores.)