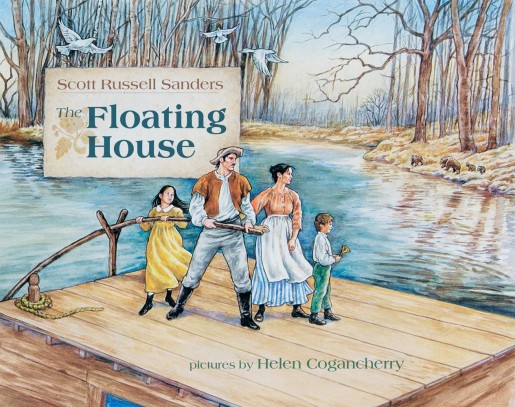 Our fabulous local librarians came up with a fun program for the kids: the library is sponsoring a “Read Across America” program. They have hung a huge map from the checkout desk, and every kid who reads a book from a cartful of selections gets his or her name written on the map. The map is filling up fast!

Rose’s selection was The Floating House by Indiana University writing professor Scott Russell Sanders. Fascinating book. It’s 1815, and the McClure family is one of many families journeying by flatboat down the Ohio River in search of a new home. As soon as the winter ice clears, they depart from the Pittsburgh area with everything they own aboard their small houseboat—including the horse and cow. They are headed for the tiny new community of Jeffersonville, Indiana, where land is only a dollar an acre.

It’s a good old American pioneer story—one of my favorite genres, which is probably no surprise to those who’ve heard me enthuse about Laura Ingalls Wilder. But this story is told from an angle I’ve never seen before—the view from the river. My girls were entranced by the details of flatboat life: getting stuck on sandbars, passing young towns, hunting wild turkeys on shore at night. At one point a “churning carpet of squirrels” blocks the river in front of the McClures. What an image! (We were all disappointed that the art, which is lovely, didn’t show this scene.)

Tomorrow Rose gets to go write her name on Indiana. I, meanwhile, am haunted by the metaphorical possibilities of the book’s ending: when the McClures finally reach Jeffersonville, their new neighbors help them dismantle the boat and use the lumber to build a house. There’s a poem there, if I ever get a minute to write it!