On my mind constantly of late: notebooks, sketchbooks, art journals, and combinations thereof. Conversations are swirling in several of my circles—

• at Sketchbook Skool there is always lots of chatter about what people prefer to draw on and with;

• over at Wisteria & Sunshine, Lesley has been revisiting the topic of daybooks (especially handmade ones);

• Amy Ludwig Vanderwater is hosting a summer “Sharing Our Notebooks” project that I plan to participate in, soon as I get a chance…

Once a week I meet a small group of teenaged girls (one of them my Beanie) at a coffee shop to discuss literature while their younger siblings take piano lessons in the studio upstairs. This is hands-down one of the best hours of my week: meaty stories; lively analysis; word-collection; chitchat. A couple of weeks ago we ran off on a tangent of comparing one another’s notebooks. The conversation coincided with a similar thread at Wisteria & Sunshine, so I was primed. I’ve been using graph-style spiral-bound steno pads for the past year or so, with a modified bullet-journal method. (Chiefly the use of an index page at the front of each notebook—that was a game-changer for me.) But I was hankering after something less utilitarian-looking, and one of my lit girls had a new kraft-brown Moleskine that set me swooning. Back at home, I looked it up and it was exactly what I wanted. Slim paperback in the size I favor (Moleskine calls it “large” but it’s only 5×8), and—this was crucial—they offer a “squared” (graph-style) version.

I’ve used Moleskines before but mostly the Volant model with the bright solid-colored covers. So pretty on my shelf but you can’t really fold them back on themselves, and I don’t like writing on a double-page spread. That’s why I’ve mostly sighed and made do with spirals. But Moleskine’s Cahier model with a heavy paper cover is flexible enough for me to fold back. And I love the pocket in the back, such a nice touch.

Kraft paper is one of my favorite surfaces for decorating, so of course the cover cried out for some decoration. I started on the back in case I messed up. Still haven’t decided what I want to do on the front. 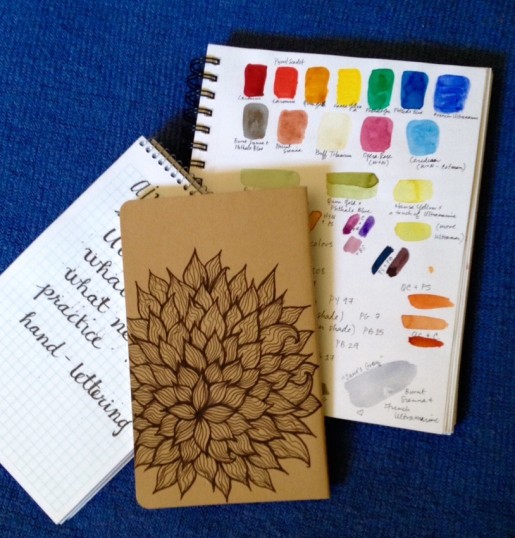 I love a skinny notebook not only because it fits easily in my bag, but because it fills up faster. I am mad for the fresh start. I had a few pages left in my May steno book but I craved a clean slate for June, so I’ve been using up the steno pages with hand-lettering practice.

I use my daily notebook for list-making, idea-sorting, story-outlining, note-taking…basically anything that involves words. Words + doodles, really: my “work” pages are always margined with crosshatching and basketweave and spirals and mushrooms…whatever. I used to try to keep things compartmentalized: one notebook for current book-in-progress; one for medical & insurance notes (I always seem to have volumes of these); one for quotes/commonplace book entries; one for to-do lists…but they always wound up melded together, and then I’d have three or four mishmash notebooks going at once, which was ridiculous. So I gave up and embraced my brain’s clear need to dump itself onto a page, melting-pot style, and now I let all those channels of thought intermingle. (Messily, much like the mingling of metaphors in that sentence.) 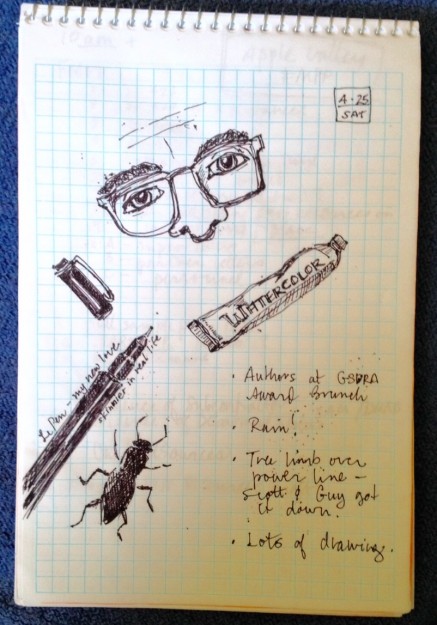 And these days my word-notebooks are overrun with drawings, too. I have a separate sketchbook—two, actually; a smaller (5×8) hardcover Moleskine that fits in my bag, and a larger (7×10) Canson mixed-media sketchbook that is my place to experiment with drawing techniques and paint. That’s where I do my Sketchbook Skool assignments—it’s my it’s okay to screw up place. Consequently, it sees way more action than the Moleskine sketchbook, which I pretty much only use when I’m 1) away from home and 2) feeling unobtrusive enough to draw in public. I don’t mind kids looking over my shoulder but I’m way too shy about my work to want adults eyeballing it in progress.

Interestingly, the Canson Mixed Media Sketchbook is the one that got a thumbs-down from Roz Stendahl (THE source of in-the-field info on all things art supply), and when I read her review I had a major light-bulb moment: Ohhhh, so you mean the paper isn’t supposed to buckle when I paint? This Canson (I’m in my second one now) is the only sketchbook I’ve ever painted in, so I thought that’s just how it went, unless you bought one with watercolor paper. Roz’s report clued me in to the possibility that the book I picked (entirely because it was on sale at Michael’s) may not perform as satisfactorily as other brands. I’m nearing the end of this one (you guys!!! I’ve filled two whole sketchbooks with drawings!!) and may take Roz’s recommendation and try a Strathmore Journal Series’ Mixed Media book next time. Does Michael’s sell them, I wonder? Got another coupon burning a hole… 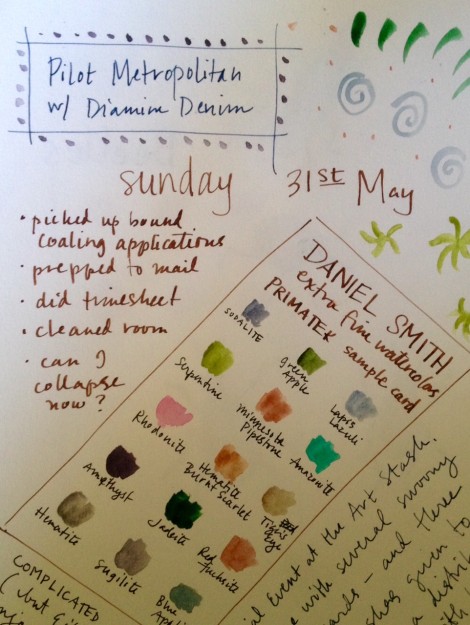 Okay, so I was saying that in theory I have the sketchbook(s) for, well, sketching, and the notebook for all the word things, but the truth is that ever since I started working on my drawing skills last fall, I’ve got rough sketches running wild all over my word-notebooks. Again, this is something I’ve just decided to be at peace with. So much of my work involves a rigorous process of polishing and structure, and I think perhaps my mind really needs a place to be messy and unfiltered, a place to set itself down in raw form. It’s like a test kitchen for my thoughts, I guess. This is where the index is so invaluable: it allows me to quickly locate the notes from that Very Important Phone Call without having to hunt through pages of nonsense. I try to update the index at least once a week—just a mild leaf-through to note down the page numbers on which I have recorded important information. I number the pages of my notebooks in the bottom right corner, about ten pages at a time. I like to write my to-do lists on a Post-It that can travel from page to page. As each task is crossed off, I jot it down in the notebook for a record of what I’ve done.

Since the ugly steno books all look the same on the shelf, I would run a highlighter down the sides of the pages, a different color for each new book. But so far the kraft Moleskine is serving beautifully, and I doubt I’ll go back to the steno grids. I might use a bit of Washi tape on the spine to differentiate the Moleskines on the shelf, once they’re filled.

Back to my coffee-shop girls. We had so much fun that day, comparing notebook preferences, that we decided to all bring our sketchbooks the following week. Which was truly delightful—what a treasure, this look at the outpouring of creativity from these girls. Beautiful design work (I mean really breathtaking, some of it), whimsical drawings (much more skilled than mine), and illustrated quotes, and just so much wonder, so much evidence of curious minds sifting the world. I felt really honored to have this work shared with me. We are nearing the end of the topics we charted for our class, but the girls begged me to keep going through the summer. So we’re thinking of spending a few weeks on sketching and notebooking. I have all sorts of ideas for things we can do together—heavily Lynda Barry-influenced, naturally, because who better to guide you through an exploration of all the things a sheet of paper can become?