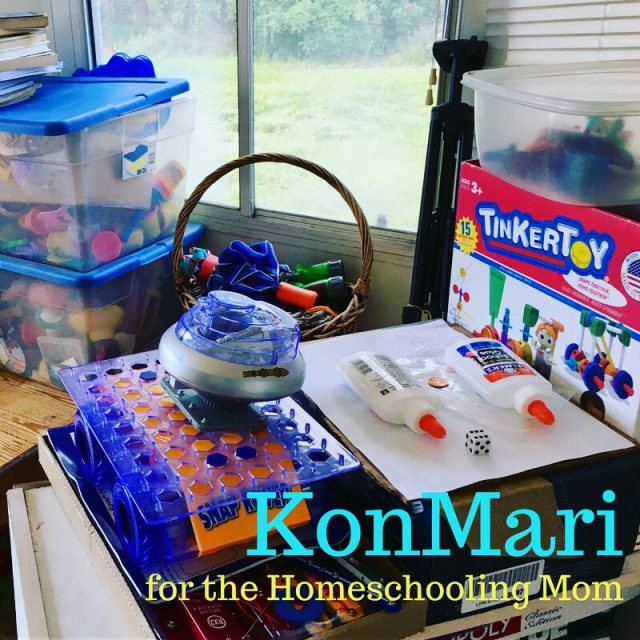 This is going to be terrible, so start with something easy. Let’s say: board games. Collect all the boxes from the playroom shelf and put them in the middle of the floor. Go through each box. Have an old Tupperware container handy; you’ll need something to hold the stray buttons and loose change you’re going to find rattling around each box. (Don’t worry that the Tupperware is missing its lid. You’ll get to Tupperware lids in Step 13, That Box of Miscellany in the Garage.)

Collectively, your board game boxes will contain seventeen dice, forty Pictionary drawings, six Mousetrap pieces, eleven paper squares from Caves and Claws, some D&D minifigures, and 1 1/2 actual game boards. Add the minifigures, dice, and Caves and Claws squares to your Tupperware container. Throw everything else away. I know, I know, the rest of Caves & Claws is long gone and saving random game pieces is pointless, but you’re just getting started here and your heart hasn’t hardened yet. Give it time.

Next up: art supplies. This step will be easier than you think, as long as you steadfastly refuse to let your brain access budget records.

Paint in tubes and bottles: If item was first opened more than six months ago, toss it.

Brushes: If they came from a Crayola or RoseArt paint set, toss them. If your toddler dipped them in glue, face the fact that you are never going to get around to soaking it out. Toss them. All other brushes go in an empty mason jar. Place this jar on a centrally located shelf. Consider artfully leaning your old tin of beeswax crayons behind it. This display will afford you feelings of satisfaction. You will need to summon those feelings in moments of despair as you work your way through subsequent steps.

Crayons: Gather all loose, blunted, and broken crayons from around the house. Place them in a clean five-gallon ice-cream tub. (You’ll find two of those under the kitchen sink and four more stacked on the dryer.) Dig your hand into this glorious collection of crayons. Bring up a fistful and gaze upon them, recalling to mind all the times you resolved to melt them into wonderful homemade crayon balls, blocks, and tapers. As you gaze, ask yourself the one crucial question: Does this spark guilt? Of course it does. Throw them all away. Ignore any lingering pangs of regret. Ten minutes from now you’ll remember it’s your turn to bring a snack to your child’s Little League practice. The ensuing waves of panic will obliterate any memory of the broken crayons.

If, however, you open a cupboard one day and find a refillable plastic cup from the local zoo—it will be giraffe-colored with an accordion-pleated straw—discard it immediately. You are never, never going to remember to take it with you for the 20¢ discount.

Toys. One does not KonMari toys. That way lies madness. You can’t pick up every single toy and ask a question about it. That process would spark many feelings, and none of them would be joy. Anyway, most of the time the question would be “Why is this sticky?”

Here is what you do with toys: gather assorted large cardboard boxes or, if you are one of those fancy types, Rubbermaid storage bins. Dump random armloads of toys in these boxes/bins. Label them Box 1, Box 2, and so on. Allow only one box into the house at a time. Three weeks from now when your children are bored, make them refill Box 1 with all the toys they’ve dumped out in the interim. Swap it out for Box 2. They’ll greet its contents like long-lost friends. Repeat this process, rotating through boxes, at monthly intervals or on the third day of a rainy streak. Store the other boxes in your garage or attic. Your children can deal with sorting and purging these items when they’re grown. I mean, you can’t possibly be expected to remember which My Little Pony is the one that must be kept for all eternity.

Eh, while you’re at it, stick the lidless Tupperware container from Step 1 into one of the toy boxes. There are probably at least three other Caves & Claws pieces in there somewhere.

Look, those nondescript rocks and pebbles are VERY IMPORTANT to someone in your home. If you do not understand what Marie Kondo means when she talks about things “sparking joy,” ask your seven-year-old if these are his rocks and observe the expression on his face. That’s the feeling you’re chasing here.

Clothing. There is no point in attempting to KonMari your children’s drawers and closets. Those places are subject to particular laws of physics which cause any neatly folded or hung matter to expand and accumulate in untidy heaps. Nature abhors a vacuum and so does your child’s sock drawer. Who are you to alter the laws of space and time? Move on.

Craft supplies. (You can distinguish these from art supplies because they exist in a different room of your house and usually involve thread.) Outfit yourself for an archeological dig, because that’s what this stage will be: an expedition through the strata of your previous selves. A dozen fabulous iterations of you will be unearthed as you work your way through the layers. You, the erstwhile quilter. You, the maker of beaded jewelry. You, the needle-felter. You, the handstitcher of faceless cotton dolls. You, the…wait, what’s quilling?

Do not lament the incomplete manifestations of these past selves. Each of them was awesome for at least a week, maybe a whole second trimester. Also, each one of them undoubtedly sparked an enthusiastic blog post which inspired some other woman with more follow-through to actually become accomplished at said pursuit. I mean, that has to count for something, right? Right?

Anyway: here’s what you do with all these craft supplies. You say airily, “Oh, hey, [insert name of nearest child], any interest in [random craft]?” Rotate through children’s names until someone gasps with delight. One of them will, and you’ll look extremely cool for having all the materials on hand already.

You knew it had to come, sooner or later. The homeschooling materials. Brace yourself. This is just a warm-up for your books, which is where the real pain lies.

First, assemble all packaged curricula. If an item is intended for second grade or younger, box it and give it to that sweet-faced young mom at park day, the one with a kindergartener and two babies. She’ll be delighted and will leaf eagerly through the instructor guides, each item sparking joy. As a courtesy, strongly advise her not to use any of it, just as you wound up not using it. She’ll ignore you, and this coming September she’ll suffer through one impossible week in which she tries to “do school.” Then she’ll stuff it all on a shelf and avoid looking at it until her oldest is in college, at which time she’ll repeat this time-honored cycle. This is a necessary stage in the metamorphosis of a homeschooling mother. In inflicting these materials upon her, you’re simply participating in an inevitable, natural process. I mean, really, it’s the same thing as planting milkweed.

Survey your remaining materials. You will be surprised to find that’s it’s all good stuff that your family actually uses. That’s because you successfully emerged from the homeschooling-mother pupal stage about the time your fifth kid was born, and also you were too broke to order anything new.

Have someone sharpen all the stray pencils and put them in a jar next to the paintbrushes. Post a picture of this on Instagram. We’re sparking now!

Who put all these pigeon feathers in the linen closet??

You’re getting kind of bored with this and anyway, Lent is almost over. You know you have to deal with the books. It’s impossible, but there’s no avoiding it. Marie Kondo says to begin by assembling them all in one place. This is good advice. Gather every single book in the house into one place, preferably the living-room floor. You’ll be bombarded with emotions as you handle each book. Do not, repeat DO NOT, stop to flip through Brambly Hedge or Swallows and Amazons. It is acceptable to sing “Bed in Summer” while adding A Child’s Garden of Verses to the pile.

Complete the process by placing your copy of Home Comforts on the top of the heap. At this juncture, your floor will collapse under the collective weight of your family library, and your entire house will be swallowed into the abyss.