When my sunflowers were about a foot high, I planted morning glory seeds near the base of each stalk. Now that the sunflowers are spent, I’ve been stripping off their lacy, bug-chewed leaves and watching the morning glories climb. The drooping sunflower heads are heavy with their own seeds; the goldfinches are in heaven. Empty shells litter the earth beneath the green hearts of the morning-glory leaves. When all the sunflower seeds are gone, I’ll remove the dry brown flowerheads and the stalks will disappear behind a curtain of blue trumpets. 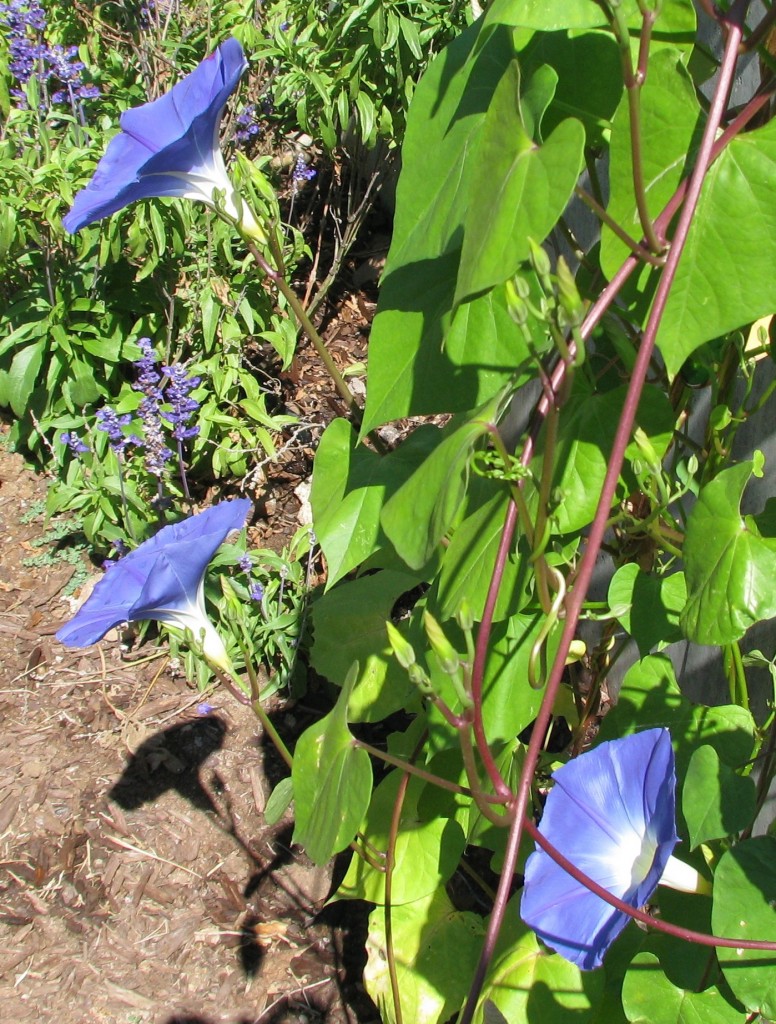 This is a tremendous amount of fun to be had for the price of two seed packets.

I worked for hours in the garden this weekend, weeding and pruning, battling the dreadful August crisping. The blossom-tumbled flowerbed that is the envy of Easterners in January, when my cape honeysuckle goes on a spree and tomatoes spring up Phoenix-like from the ashes of the blistering autumn, is right now a dry, crackling place. I cut back all the dead growth and removed a few of the spent sunflowers. There’s nothing sorrier-looking than a dying sunflower, hunched over, staring gloomily at the ground. But those mournful flowerheads are loaded with ripening seeds, and the goldfinches are waiting…so my garden remains shadowed by these faded giants who stared too long into the flaming sun.

That all sounds very bleak, but actually things are looking much better out there after my ruthlessness over the weekend. Almost nothing’s in bloom, except the cheerful moss roses, but I discovered a vigorous melon vine hiding under the weedy mass of out-of-season primrose. No cantelope blossoms yet, but here’s hoping…

* Beanie started reading The Gammage Cup yesterday and says it’s the best book she has read in a long time. (Update: by the time I posted this, she’d finished it and moved on to The Whisper of Glocken.)

* We’re having “Moon Week” for Rilla this week. Spent a long while yesterday looking at moon apps on the iPod, talking about waxing and waning and gibbous and crescent moons. Scott is hunting all over for our copy of Owl Moon—it was right there on the shelf in the boys’ room last week. He did find When Moon Fell Down, a book we adore, and I think I know where The Moon Jumpers is. And on Huck’s favorite DVD, a Scholastic Storybook Treasures collection, appropriately, called I’m Dirty (the title story’s about a garbage truck), there’s a story called Stars! Stars! Stars! by Bob Barner, a lovely picture book (rendered with some gentle animation on this DVD) that has caught the imagination of both Huck and Rilla.

(Those are Amazon links but not affiliate links. I know I should link to IndieBound instead but I don’t feel like extra clicking this morning. But please do support your local independent bookstores.) 🙂

(About those Scholastic Storybook Treasures collections: Scholastic sent me a bunch of them to review, and I have to say they completely won me over, despite my longstanding resistance to books-on-DVD. I always think: why have a kid watch a book instead of reading it to him? But these are beautifully done. Think Reading Rainbow instead of animated storybook. The animation is slight—the art is the exact spreads from the original picture books with a little bit of movement added: the garbage truck rolls down the street, the shooting star streams across space. You can toggle the text on and off; I leave it on to help my emergent reader. I love the selection of stories—I’ll have to do a separate post about all the collections they sent me. I realized this is not much different that the book-and-cassette-tape sets I used to check out from the library for my older girls, but with much much better production values. And I sort of love that my littles are listening to stories I haven’t had a chance to read them yet.)

* Wonderboy started back to school last Wednesday. Same little class, same teachers. He’s enjoying. We’re adjusting. He had an audiology appointment yesterday and despite some serious wax occlusion he tested at very high comprehension levels in the hearing test: with the new hearing aids, he’s catching 77% of quiet speech and 86% of normal conversational speech. That’s huge. He was hearing barely over 50% with the old aids. This is very big.

* Jane enjoyed her summer course in C++ through Giant Campus Academy and has enrolled in their Computer Science class this fall. Starts next week. And she had a great week in Virginia. We are glad to have her back. 🙂

* Rose got Pokemon Soul Silver for her birthday last week, and she and Beanie and Rilla have been drawing and cutting out Pokemon paper dolls and making incredible collage backgrounds for them. I’m in awe, constantly.

* I’m struggling with Ragnarok. All those brawny, brainy gods are besting me. I took a break from reading over the weekend (and from blogging and social media as well) and spent some time slaughtering orcs in World of Warcraft instead. Sometimes there’s nothing that boosts the spirits more than battling orcs. 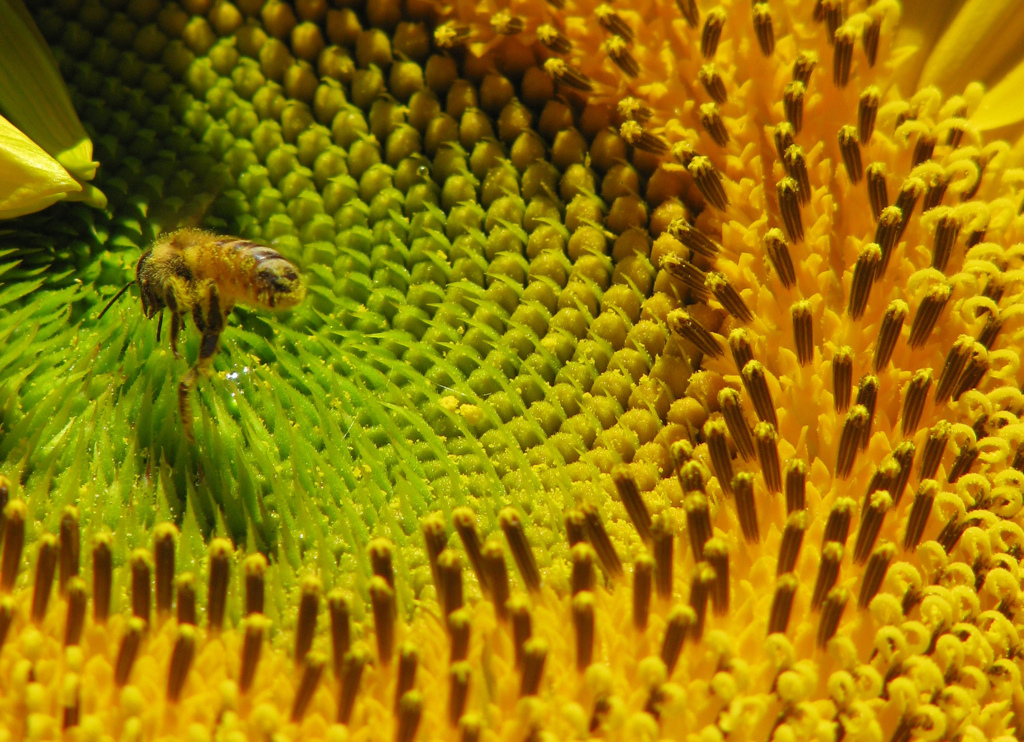 (Click on this one; it wants to be big.)

Here’s a bit of synchronicity…I caught this picture of a pollen-dusted bee this morning while Rose and I were doing the watering, and then a friend shared the following breathtaking video on Google+.

And here’s another video that gave me goosebumps this afternoon: a whale caught in fishing line celebrates her freedom after a boat crew cuts her loose. The last minute brought tears to my eyes.