You Married for Love 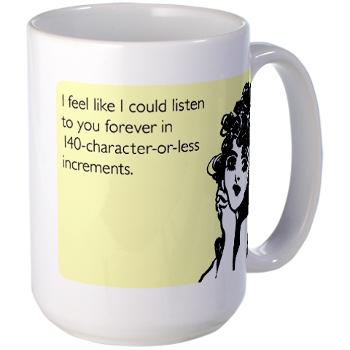 Scott gave me this mug for Valentine’s Day, and I laughed my head off. Okay, sure, I managed to drink an entire cup of cocoa from it before I noticed it was a new mug and read the message. In my defense, this was at the crack of dawn in a dim room and my brain doesn’t fully engage until after my morning cocoa, which happens to be a special caffeinated kind Scott orders for me because I don’t like coffee. When I did notice, I howled—and he? He fired off a tweet about it, naturally.

When we were first married, we lived in a little apartment in Queens: the top half of a duplex on a quiet street in Astoria. Our landlords, an older Greek couple, lived below. Mr. P. had boundless energy and a flair for drama; my stories about him could fill a book. Mrs. P. was quieter but just as busy, always bustling about, always cooking something or cleaning something or both. She was ten years younger than her husband; theirs was an arranged marriage, they told us proudly the day we met them.

“But you, Melissa,” Mrs. P. used to say, shaking her head ruefully, “you married for love.”

We rented their apartment for five years—it was Jane and Rose’s first home—and they loved us. But when Scott quit his job as a Batman editor at DC Comics in 1998 to work at home as a freelance writer, Mrs. P. was baffled. To her it seemed a crazy decision, throwing all security to the winds. Scott and I were in heaven; we’d both hated the long hours he’d had to be away, between the job and the commute to and from Manhattan. (And that was during DC’s golden era in the 90s; those hours were a cakewalk compared to the late nights routinely expected of DC staffers nowadays, at least in the West Coast offices. In the 90s, when Scott was at DC, Paul Levitz would sometimes walk the halls at 6pm and tell harried editors to go home and be with their families.)

In 1998, our little family was bouncing back from the first harrowing year of Jane’s leukemia treatment. From March through November of 1997, I had lived at the hospital with two-year-old Jane. Our longest stay at home during that stretch was a luxurious ten days. The rest of the time, we were lucky to last more than a weekend at home before Jane’s counts would plummet and she’d spike a fever, landing her back in the hospital. Any temp over 99.5 meant an automatic admission to the cancer ward. Scott would race out of the office at the end of his workday, take the subway home to Astoria, and jump straight in the car to drive out to our hospital on the edge of Nassau County. He’d spend three or four hours with Jane and me, making sure I ate a good dinner (poor Jane couldn’t stomach much), bringing us fresh clothes, reading to his little girl—and then he’d have to drive back to an empty apartment late at night, and get up in the morning and do it all over again. By the spring of ’98, when things had turned around for Jane and she entered the mostly-outpatient phase of her treatment, we were expecting Rose, a late-summer baby, and all we wanted was to spend as much time together as possible.

I turned in my first Martha book that spring, and Scott began to think seriously about leaving DC to go freelance. We spent many a night discussing whether we could make it work. Then my editor called; she wanted to know if there was any way I could take on the Charlotte series as well. It would mean writing two novels a year instead of one; there was no way I could manage it as the sole stay-at-home parent. But with Scott home…it was exactly the impetus we needed. That, and the fact that his bosses at DC offered him a big promotion. As I recall, he was already the second-youngest person ever to make full editor at DC (Paul Levitz was the youngest). Now they wanted to promote him to senior editor. It was kind of a big deal. But it would mean a radically different future for us. A house, yes, and security. But we would spend our days in different worlds.

I know, I know, that’s how it is for most everyone. I have friends whose husbands have to catch 7am trains and don’t return home until well past dinner. I have friends whose spouses spend a lot of time on the road or are deployed to foreign countries. We’re far from the only couple ever to face the choice between time together and financial security. But in 1998, after our little family’s long, hard hospital ordeal, we wanted—needed—to be together. We’d learned that time was short and life was uncertain. We saw other parents lose children after months of terrible struggle. We saw marriages fracture under the strain of trying to hold a brutally heavy load. We’d drawn closer than ever, bearing each other up, making each other laugh.

Scott turned down the promotion and gave his notice. I accepted the Charlotte offer. This was a couple of weeks before Rose was born; I wrote most of the first Charlotte book wearing infant Rose in a sling. Scott was offered a monthly gig writing Gotham Adventures. Money was tight, and space was tighter, but Jane was getting healthier, and we were all together, and we were happy.

“Oh, Melissa,” Mrs. P. would say, always with that shake of the head, “you such a nice girl. You should have your own house.” She knew we had just enough to pay the rent, and that a mortgage was out of our reach—at New York prices, anyway. We hoped to move to a less expensive area, maybe Virginia, after Jane was finished with chemo, but that was a long time away. Her maintenance protocol was two years long. Mrs. P. knew we were a bit cramped in the apartment (in large part because our various publishing jobs had resulted in an already massive library of books and comics) and of course our kids didn’t have a yard to play in. The duplex’s little backyard was entirely devoted to Mr. P’s wonderful fruit trees and vegetable garden. Our landlords shared their bounty with us generously—nearly every week a basket of pears or homemade baklava appeared on the inside steps leading from their floor to ours—but in five years we never actually set foot in the garden we gazed upon from our bedroom window.

“Your husband should give you a house,” Mrs. P. would cluck. “But you—you married for love.”

You bet I did.

I married that boy who made me laugh, and who loved The Lord of the Rings as much as I did, and who was smart enough to keep me on my toes. I was a goner from from the very first rehearsal of Black Comedy junior year where he played my leading man. My roommate cautioned me not to wear my heart on my sleeve but I couldn’t help it; it did the Twist every time he walked into the room.

It still does. We go for a long walk together every weekday morning, just the two of us, and no matter how far we go we haven’t half exhausted our list of things to talk about when we get back home. This morning we were passing a house on the next block when a neighbor called to us, a man we’ve seen a handful of times before but haven’t spoken to beyond wishing each other good morning.

“Excuse me,” the man said. “I just wanted to say. I see you two out walking, and I just had to tell you how sweet it is to see you walk by my house laughing and holding hands. You look so happy together.”

Sometimes we see elderly couples out walking and I get a lump in my throat because I want that to be us, forty years from now. Fifty years from now, with our walkers and canes. Really I don’t think fifty more years will be enough to talk about all the things we want to talk about.