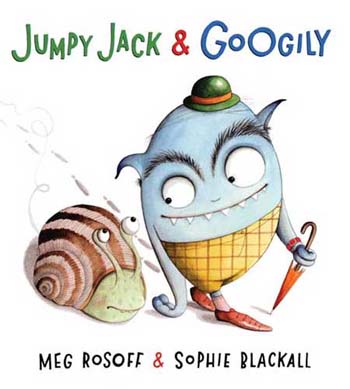 What a charmer this picture book is. Scores very high on the giggle-meter with my gang. Jumpy Jack is a snail of the most nervous sort. As lovably neurotic anthropo-morphizations go, Jack’s right up there with Piglet, friend of Pooh. Fortunately, Jumpy Jack has his best friend Googily to put his mind to rest when the monster-worries creep in. Jack fears monsters are lurking at every turn—monsters with big round eyes and sharp teeth and lolling tongues and possibly even creepy bowler hats. Googily—he’s the amiable fellow in blue you see there—is a little puzzled by Jack’s boogieman complex, but he’s always happy to help soothe his pal’s fears by taking a peek into the corners Jack’s sure are hiding fearsome monsters.

In the end, we find that Googily has a fear of his own—and apparently with better reason than Jumpy Jack! The surprise ending elicited belly laughs from my seven- and two-year-olds.

I really love this sweet and simple picture book. It’s fresh and funny, and the art is enchanting, and the text holds up well to numerous re-readings, which is a quality I very much watch for in a young picture book. If I’m going to have to read it aloud five times a day, it’s got to be readable.

But beyond that, I appreciate the way the plot plays with the idea that people can create monsters in their minds, terrifying specters composed of stereotypes, while being oblivious to the fact that the generalizations they are throwing around so carelessly might very well include real people they know and love.