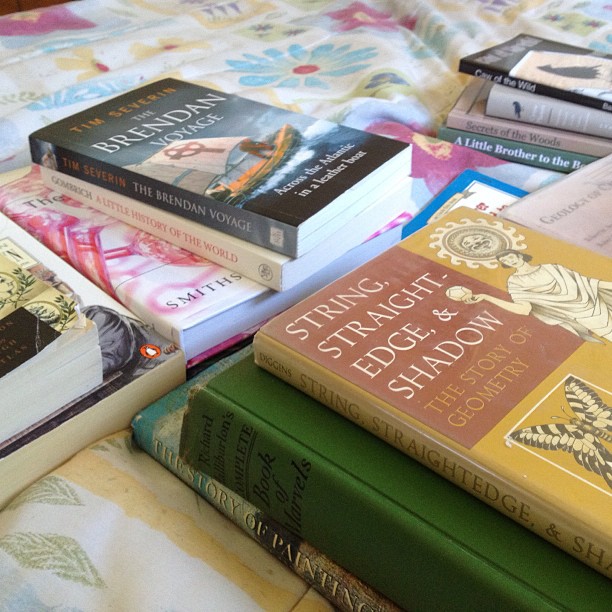 Huck has not yet seen Bambi, but his inflection perfectly mirrored Flower the Skunk when he said, for no particular reason, “You can call me Mechanic if you want to.”

I have worms on the brain. We had to give up our compost pile a few years ago since it was attracting rats. Not composting kills me. Our town offers coupons for a small enclosed composter, knocking the price down to $40. Or…there’s this. I’ve been interested in vermiculture for a very long time. There are cheaper methods than the Worm Inn; YouTube abounds with videos demonstrating the Rubbermaid bin technique, and that’s probably a better option for starting out. Our favorite local nursery sells bags of redworms for about $15. I’m contemplating.

Yesterday evening, with little fanfare and a grin bigger than the Cheshire Cat’s, Rilla learned to knit. We were lounging in my room while Scott was making dinner, and she happened to spy a pair of knitting needles in the pencil mug on my shelf. “Oh!” she gasped. “You were going to teach me to knit!” (I think we last mentioned it around Christmastime.) Jane supplied a ball of yarn, and before Scott’s chicken fajitas hit the table, Rilla was purling away. I’m putting it here so I’ll remember the day.

(Tip discovered by chance: Use variegated yarn for teaching beginners. The color changes make it easy for newbies to distinguish the different loops on the needle. Rilla got the hang of it much more quickly than her sisters before her, and without the learning-curve frustration. I remember prior first lessons ending in tangles and tears.)