A Little Smackerel of Nothing

“How do you do Nothing?” asked Pooh, after he had wondered for a long time.

“Well, it’s when people call out at you just as you’re going off to do it ‘What are you going to do, Christopher Robin?’ and you say ‘Oh, nothing,’ and then you go and do it.”

“This is a nothing sort of thing that we’re doing now.”

“It means just going along, listening to all the things you can’t hear, and not bothering.” 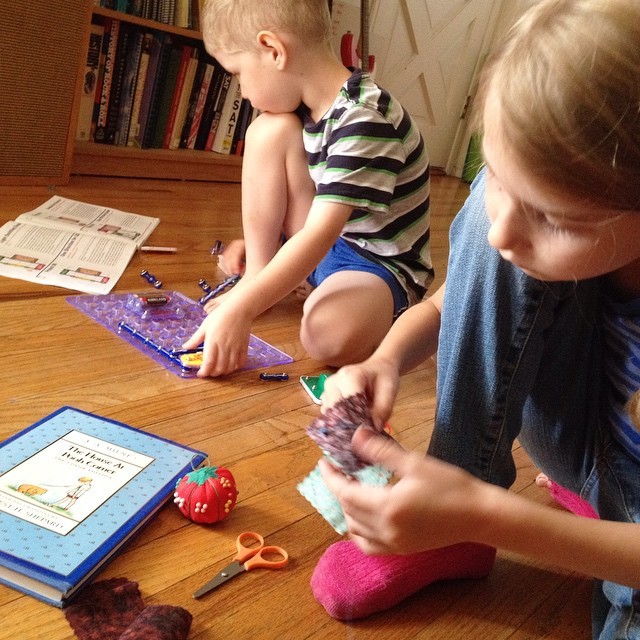 We order wonderful little homemade soaps from Julie at The Parsonage, whom I met via Lesley Austin’s Wisteria and Sunshine community. Julie’s soaps smell heavenly and last a long time (much longer than the bottles of liquid soap we used to tear through). One of my favorite things about them is that they come wrapped in strips of fabric—so simple and pretty. Rilla saves these cloth strips and this morning she started to sew them into a little blanket. I was reading our chapter of House at Pooh Corner (we’re almost finished, sob!) and got such a smile out of the scene at my feet—these two each so intent on their separate pursuits. I couldn’t resist laying down the book and snapping the moment with my phone. Rose allowed Huck access to her Snap Circuits set a couple of weeks ago and he has played with almost nothing else since. He has worked through all the projects in the book and is beginning to invent his own whirring, buzzing, siren-blaring arrangements (and to drop extremely broad hints about needing more parts).

Then, suddenly again, Christopher Robin, who was Still looking at the world with his chin in his hands, called out “Pooh!”

“I’m not going to do Nothing any more.”

I think I’m not going to read them the final chapter of Pooh Corner just yet. We started with this volume because I couldn’t find our copy of Winnie the Pooh, which comes first. But now I want to go back and read them that one (it’s bound to turn up). I flipped ahead to the end of Pooh Corner today and got teary at the goodbye scene…I’m not ready for these two, my last small fry, to contemplate leaving behind the Hundred Acre Wood. At least I know that no matter how Old they get, and how Busy with Important Things, they’ve been raised to appreciate the value of Nothing.