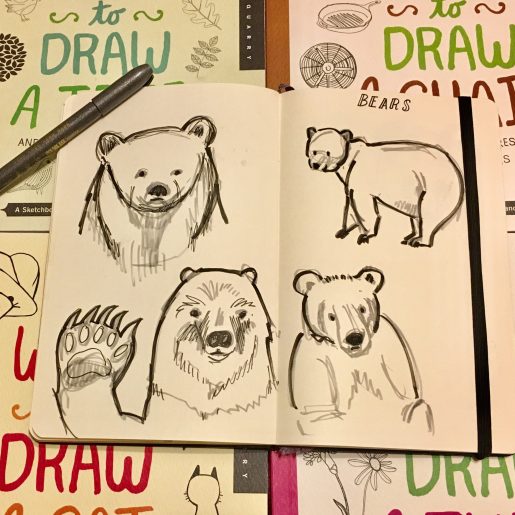 Huck this morning: “Why are you on a site called Goo Dreads?”

Dread is actually an apt word for my feelings about catching up my Goodreads, which (thanks to Cybils) is about thirty YA novels behind. I’m trying, but it wants time I do not have. And then there’s my booklog here at Bonny Glen, which is a whole other task. Maybe I’ll outsource it to a kid.

Today’s picture book: Hedgie’s Surprise by Jan Brett. A natural choice after yesterday’s pick. I think this one may be my favorite of Brett’s Hedgie stories. And the needlepoint patterns in the margins have me itching to paint. Maybe that’ll be my drawing challenge subject for the day.

As I mentioned yesterday, I’m hoping to sketch every day this year. A few weeks ago, Scott remarked offhandedly that I ought to draw more bears. So during that night’s art date with Rilla, I pulled up a Google image search and tried my hand at a few. Yesterday I attempted a polar bear. I went right to the good paper, which might have been a disaster because I thoroughly botched the proportions and put the face way too low. Fortunately I have learned to use something water-soluble for my first rough sketch. (Or pencil. I love pencil. A lot of instructors tell you to avoid pencil, but I think they see relative shapes a lot better than I do. I need to be able to shift things around. Like when the nose ends up where the chin should be.) I often begin with a blue or brown watercolor pencil and go over that with black waterproof ink. Lately I’m enjoying a gray Kuretake Fudegokochi brush pen. When I mess up on my first pass, as I inevitably do, I can blur the mistakes into shadow with a waterbrush. The bear is still messy but I was much happier after I redid his face in black ink. 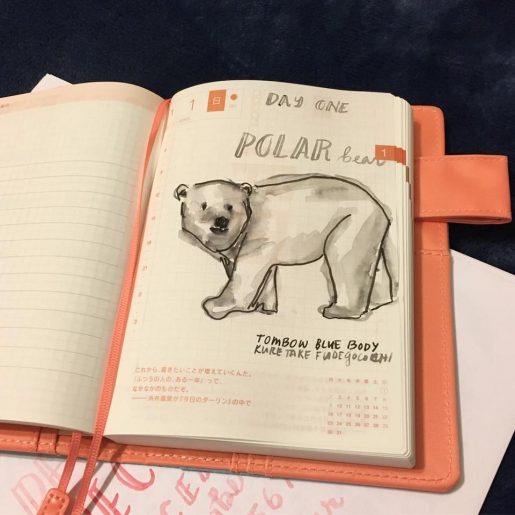 Someone asked how I’m finding time to keep up the sketchbook practice, given all the work on my plate this year. The answer is: I give it fifteen minutes a day. That’s all. I mean, there are days when I get lucky and find some extra time, like if I sit on a bench and draw while the kids are at the playground. But sometimes I prefer to read during playground time instead. And so I’ve committed a quarter of an hour to sketching every evening at 9pm. Fifteen minutes isn’t much. (That’s a big part of why that polar bear is so messy.) But it’s something. It’s what I can manage, for now, and that’s enough.

This morning I sorted two bookcases’ worth of books. I’ve pulled together a new row of picture books for our daily selections—enough to last us for four months, if we read one a day. Every book I handled felt like another conversation, a whole post unto itself. It’s funny that I had so many days last year where I couldn’t come up with anything to blog about—I learned a long time ago all I have to do is walk over to one of my shelves.

At one point this morning I had at least a hundred books in piles on the floor, swallowing the room, when I came across our copy of Material World. Which, if you haven’t seen it, is a collection of photographs of families around the world with all their material possessions spread in front of their homes. The variation between quantity of stuff from family to family is staggering. We Americans, we…accumulate a lot of things. Like, say, books.

We finished Understood Betsy just before the holidays, and now I need to choose the next readaloud. Scott read The Best Christmas Pageant Ever the whole family (including the college kids and me), which bought me time to decide, but…I’m still undecided. We still have so many great books in the pile for this year! Jane (still home for winter break) is plumping for The Firelings. Which may have been one of the first readalouds I ever wrote about on this blog. Maybe it’s time. 🙂

After the morning’s bookcase jamboree, I took the younger kids to the playground. I’ve been a lot better about this lately—you know my older girls practically grew up at local parks, but rhythms change when you have teens, and park visits had all but disappeared from our routine for a while. But last fall I stepped it back up. They’re old enough that I can sit, as I said, and read or sketch. Or catch up on blogs. 🙂 Which makes me That Mother you see condemned in posts that make the rounds occasionally—you know, the ones written in tones half imploring, half scolding, about much you miss when you’re staring at your phone while your kids are playing. “I watched your beautiful daughter twirling around in joy and you—you missed it. Because Facebook.” Those always make me laugh. I’m like: honey, I have been taking my kids to the playground since 1995. I have stood in line at the post office with an imaginary goldfish in my hand. I have sat on hospital beds entertaining a toddler with playdough by the hour. I’ve spent all morning homeschooling them. I’ve read thousands of books out loud. Literally thousands! So here at the playground? I’m good. They’re, you know, playing. They don’t need me hovering over them on the jungle gym. In fact, you just know the next article in my feed is going to be a screed against helicopter parenting. So I’m just going to sit here with my magical smartphone and catch up on some reading. Or play a game. Or maybe even goof around on Facebook. Which is where I happened to be when I came across your post, so don’t pretend you aren’t doing the same thing.

Favorite playground moment today: we’d just arrived and my kids were already up the hill toward the play equipment. As I got out of the minivan, a preschooler in a bright orange shirt jumped out of the next car over, took two steps onto the grass, and shouted, “I’m here!” To no one, and everyone.

Today was too chilly for sitting on a bench. (Sorry, Facebook.) We had unusually heavy rains recently (I mean, it’s San Diego; rain is unusual, period) and there were big sploshy puddles all over the place. The kids mostly avoided them by keeping to the mountain peaks of the jungle gym. I decided to get a bit of exercise in by walking laps around the wide, flat grassy area adjacent to the playground. You can see the play area from the whole circumference, so you don’t even have to miss That Mother’s beautiful daughter twirling around in ignored joy if you choose.

I pulled up an audiobook I started several months ago, Robert Macfarlane’s wonderful Landmarks, which is about the language we use for things in nature—terrain, weather, flora. Specifically: the “place-words” of the United Kingdom. When last I listened to this book, I was playing Minecraft. And as soon as the new chapter loaded and the narrator with his wonderful accent began reading the opening lines, my mind was flooded with images of the house I’d built in that particular Minecraft world—a birch cabin on a bluff overlooking a river, with a village in the distance and a craggy mountain rising behind. I remember thinking at the time that Landmarks was the perfect book to listen to while playing Minecraft, since both are so thoroughly centered around terrain. It was also perfect for listening to on a brisk walk through a soggy park. Macfarlane even mentioned a Scottish word for “a person who is walking briskly”—I need to get hold of a hard copy and look it up, because I missed it on the walk, what with all the puddle-sploshing.

It’s terrible, in fact—every other sentence made me long for a print edition of the book to mark up and dog-ear—on the very day when I’ve embarked on a ruthless shelf-culling endeavor! Plus now we’re past both Christmas and my birthday. 😉 I’ll have to get it from the library, though, because Chapter 4 is all about a Scottish author named Nan Shepherd and her book The Living Mountain, “a celebration of the Cairngorm Mountains of Scotland.” There were easily five quotes in the first ten minutes that I wanted to copy down. Which I could have done if I were sitting on a bench staring at my phone. I’m just saying.

Backing up to the Minecraft thing for a moment—I’m amazed by how clearly I can picture that map, and even remember some of the adventures that befell me there, just because I was listening to an audiobook while playing. I mean, I’ve played a lot of Minecraft over the years, with my kids and without them. The worlds all begin to blur together after a while. Except for those I’ve explored while listening to something on audio. I went through a whole slew of lectures a couple of years ago—mostly literature classes via Yale Open Course. I can’t just sit and listen to something; I have to be doing something with my hands. (This is why I make sure my kids have something to play with while I read to them.) Nowadays I usually use the listening time to sketch. Or to clean a bathroom. File some papers. But what I have found is that the lectures I listened to while playing Minecraft have stuck in my brain more clearly than the others. You see, the vivid connections are happening in both directions. I remember the house I built during Amy Hungerford’s Lolita lecture (so great!)—a small oak farmhouse with a well in the yard. I remember being down in the nearby mine fighting skeletons during the Wise Blood lecture. During Franny and Zooey I built a house of sandstone and constructed a monster trap nearby. And for all three lectures, I can recall the professor’s words with much more clarity than the one I listened to while scrubbing the bathroom. It’s like Minecraft gave me pegs to hang the lectures on. Or a map, both literal and figurative? I know this: I remember more detail from those lectures than ones I took actual notes on.

I know, I know, this post is ridiculous. You can’t have nine sections in a daily blog post. That’s serious overkill. If I had any sense, I’d have saved some of this for later in the week when open a draft and draw a blank. But I guess that’s one thing I’ve learned about myself in twelve years of blogging. If I save it, it’ll start to feel like A Topic, like something I need brain to tackle. And I have to save all my brains for work. So it’s overkill or nothing, I guess.