January is my favorite month 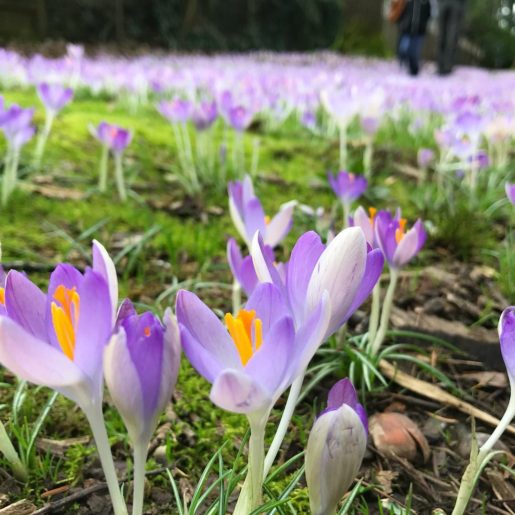 Crocuses in Wilshire Park, Feb 4, 2018. We’re not quite there yet, but it’s just around the corner.

We had a sudden blast of snow the other day, our first all year, and it caught me completely by surprise. Snow at THIS time of year? I thought—and then had to laugh. It’s January, for Pete’s sake. Nothing astonishing about snow in January, even here in the rainy northwest.

But, you see, the crocuses are budding, and the daffodils are coming up. And the general fresh-start feeling of January, plus the fresh-start feeling of the inauguration, have me feeling very springy. Winter weather was quite unexpected. The kids hurried out to enjoy the flurries while they lasted. By the next morning, they were gone. Wet sidewalks, no ice, no drifts. Not so much as a flake left.

My own crocuses are pokier.

We seem to have an odd microclimate in our yard: my bulbs consistently bloom about three weeks later than everyone else’s. I don’t mind that—it stretches out the enjoyment.

Neighborhood walks have become more pleasant since I switched back to putting in my contacts. All this past year of quarantine, I’ve had no need for them—they’re for distance; for driving, mostly; and even before the pandemic, I wasn’t driving very often. Here in Portland it’s easier to walk or grab a Lyft. In fact, we got rid of our minivan last February, so seldom did I use it. Perfect timing, since otherwise it would have gathered dust in front of the house all year!

Several of us have had our first doses of the Covid vaccine (Oregon opened it up to people with disabilities and their adult household members a few weeks ago). I’m hopeful that we’ll get the second dose on schedule in early February. If we do, I know life still won’t be back to normal quite yet, but it will be normal-er? If normal even is a thing, anymore. I look at videos of our Low Bar Chorale pub sings and marvel: a crowd of us packed together, heads close, mouths open wide. How long before such a thing is possible once more?

In December we made a group video, a virtual chorale performance of God Only Knows. It was splendid. (I didn’t submit a video myself, since they were due the week we lost my brother-in-law. But I run social media for the group and was busy behind the scenes, promoting the event.)

We’re making another group video this month—and you are welcome (and encouraged!!) to participate! This time we’re recording parts to Peter Gabriel’s In Your Eyes. Here’s an instructional video that tells you how to join in the fun. I hope you will!

I’ve rebooted my newsletter and sent out a new issue. I moved it from Mailchimp to Flodesk, so if you are a subscriber and didn’t get an issue last week, check your spam filter to make sure it didn’t get snagged. You can read the January issue here or subscribe here.

I put it on pause for January to give me some time to reorganize the tiers. Membership pricing remains the same (it’s cheap!) but the subscriber benefits have changed.

For all levels: I’ll continue my daily coworking sessions until the pandemic is well and truly behind us, and we can go back to working in coffee shops and museum cafés again. We meet in a private Zoom room and do brief check-ins before and after each hour of work. The usual schedule is M-F, 3-5pm Pacific time (except Tuesdays, when we meet for just one hour, 4-5 PST).

Fresh starts all over the place. I heart January.

When you mention A Ring of Endless Light in a post, naturally you check for dolphins among your photos. Here’s Beanie making a friend in 2008.

My morning routine has been a bit out of whack lately, and I’m trying to get it back in what an etymological site tells me is the opposite: in fine whack, meaning the same as in fine fettle.

There seems to have been a phrase in fine whack during that century, meaning that something was in good condition or excellent fettle. (It appears in a letter by John Hay, President Lincoln’s amanuensis, dated August 1863, which describes the President: “The Tycoon is in fine whack. I have rarely seen him more serene and busy. He is managing this war, the draft, foreign relations, and planning a reconstruction of the Union, all at once”.) It doesn’t often turn up in writing, though, so there’s some doubt how widespread it was.

And now I’m trying to remember which Madeleine L’Engle book discusses the word amanuensis—I’m hearing a small boy saying it; he’s proud to be someone’s amanuensis, a literary or artistic assistant; which means it’s either Rob Austin or Charles Wallace Murry. Hmm, no, neither seems right, although in my memory there was an element of precociousness in the character’s use of the word. I reread A Ring of Endless Light for the umpteenth time last year—always my favorite L’Engle novel—so that’s probably where I’m recalling it from. But would it have been Rob? Was Adam Jed’s amanuensis? Sort of?

Well, this digression is indicative of the way I sometimes allow my morning routine to skitter off course. I have a no-screens rule for the first hour minutes, and then I allow myself to open the laptop for an hour or more of writing time. I’ve been trying to keep to a strict one-tab-at-a-time habit, but a rabbit trail like the one above has generated three extra tabs and a jaunt to the library website to see if A Ring of Endless Light was available in ebook. It was! But my search for amanuensis in the text revealed zero hits. Hmm. My brain will keep poking this question until I find the answer. Watch me: I’ll wind up rereading all of L’Engle to find the quote!

Booknotes: The War of Art

The War of Art by Steven Pressfield

A reread to help me jump into a new year and a new project. Steven Pressfield’s take on Resistance is some of the most useful teaching about writing I’ve ever encountered.

“I wake up with a gnawing sensation of dissatisfaction. Already I feel fear. Already the loved ones around me are starting to fade. I interact. I’m present. But I’m not.

I’m not thinking about the work. I’ve already consigned that to the Muse. What I am aware of is Resistance. I feel it in my guts. I afford it the utmost respect, because I know it can defeat me on any given day as easily as the need for a drink can overcome an alcoholic.

I go through the chores, the correspondence, the obligations of daily life. Again I’m there but not really. The clock is running in my head; I know I can indulge in daily crap for a little while, but I must cut it off when the bell rings.”