It seems I’ve had this master-list-of-recommendations idea before: two years ago. I remember creating this Booknotes page in an attempt to link to my reviews more easily than scrolling through the “books” or “picture books” categories in my archives. I remember not getting very far very fast. I don’t remember forgetting to keep going, and then forgetting all about the page entirely.

Well, anyway, it means I already have a handy-dandy page for pasting titles into as I do my archive clean-up. I’m sure I’ll be finished in another five or six years. 🙂

One thing I’m enjoying about the clean-up is seeing what were the first things I wrote about: which books, games, websites, CDs.

First-ever recommendation, in my third-ever post, on January 21, 2005: Signing Time DVDs. Are we still fans? YOU BET. We’ve used ASL with every single one of our babies, even before we had a hard-of-hearing wonderboy in the family. Huck is currently a huge Signing Time fan-slash-addict. As has been the case with every one of our toddlers, many a meltdown has been averted by his ability to express his very specific and fervent wishes in sign language when the tall people around him fail to understand the nuances of a consonantless syllable.

(Side note: my little goddaughter got to meet Rachel recently. !!! Who, me jealous?)

First game recommendation: iSketch, like online Pictionary. Wow. We were HOOKED on that for a long time. Haven’t played it in years. Haven’t even thought about it. Gosh, I miss it all of a sudden! For a while there, a group of my girlfriends were iSketching once a week. Remember, y’all? Is it even still there? Oh my, it is! Same music and everything!

First-ever unschooling reference: Blog Day 4, a link to Sandra Dodd’s website in a post about strewing. This post is also the first to mention a book: The Lord of the Rings. Highly appropriate, considering Scott and I pretty much fell for each other during a spirited discussion of our mutual passion for the trilogy.

Other books mentioned (mostly in passing) in the first month or so:

Crowded with Genius: The Scottish Enlightenment
A Case of Red Herrings
The Bears of Hemlock Mountain
By the Great Horn Spoon
Peter Rabbit
The Maggie B.
Tikki Tikki Tembo
There’s a Wocket in my Pocket
The Read-Aloud Handbook
Alexander and the Terrible, Horrible, No Good, Very Bad Day
The Secret Garden
Redwall
Ginger Pye
Moccasin Trail
Seven Alone
By the Great Horn Spoon!
Old Yeller

(Most of the above came from two posts—a transcript of a talk I gave on Mealtime Read-Alouds, and an article I wrote for the Virginia Homeschoolers newsletter.)

Second-ever game: Oregon Trail, which still gets played in occasional week-long bouts, maybe once a year, I’d say? The younger kids haven’t discovered it yet.

First Jim Weiss rave; also first Ancient Greece reference: this post. Fun for me to revisit it just now, because Rilla has suddenly catapulted into the same kind of Greek myths obsession that Rose enjoyed at about her age. Must remember to pull out that Jim Weiss CD, if Rose (Rilla’s self-appointed tutor) hasn’t already beat me to it.

First-blogged Scott injury: that time he threw his back out.

First time I gushed about Small Meadow Press: before the first month was up.

OK, obviously I could get carried away with the firsts and seconds. I’m drawing the line at thirds. 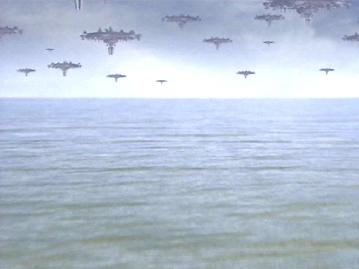 I’m doing a bit of clean-up in my archives, correcting broken links and such, a little at a time. As I’m working my way through, I thought I’d post a few highlights now and then. Some of these posts are over six years old and may be new to many of my current readers.

It’s funny how nostalgic some of the old comment threads make me. There are voices there I haven’t heard from in a long while, and others I now know very well indeed and consider real-true-friends. It’s kind of wonderful to have this record of the very first moments we met. What a strange and quirky world we’ve built here in the blogosphere, eh? It’s like that planet on Firefly with all the floating sky-estates.

A handful of picture-book recommendations from early on:

I’d forgotten about this amusing moment with a very young Beanie pondering aloud the themes of the play she called “The Temper of the Shrew.” That post is a kind of ode to Jim Weiss, who has brought Shakespeare and many another tale to life for my children since their earliest days.

This post collects some of my favorite funny kid moments ever. Oh, those obstreperous bunnies…

I love this bit about Jane’s “bouncy ball” method of handwriting.

Ooh, an idea! It has just occurred to me it would be fun to compile a list of ALL the books, CDs, games, and other resources I’ve ever mentioned on this blog. I was doing it with just the picture books above, but it might be fun to see a master list, and to look at whether we’re still reading/listening to/playing with/enjoying them now.

So, well. I guess I should start a new post for that.