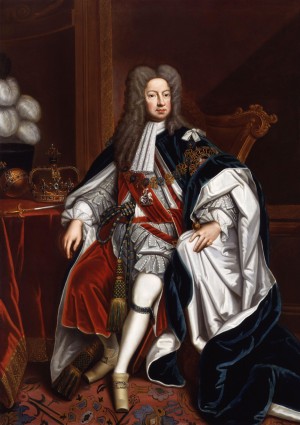 The tide seems to be ebbing, as surely as tides do ebb. We’ve put away our science reading for the summer, leaving the world poised for dramatic change in the wake of Sir Isaac Newton. The history books aren’t yet officially shelved, but it’s a week or more since we picked one up. We got sidetracked by languages and kept conjugating the mornings away. Latin and German formally, the lot of us, and French informally via children’s songs (go ahead, ask us how many elephants can balance on a spiderweb), and Rose has me inching through Spanish grammar with her, and all of us have way too many plants to water daily on Memrise. And yet we keep planting more!

Ah, Memrise. Thanks to it, I can now list all the monarchs of England and Britain—with dates for all but a couple of sticky ones. Those two kings in the middle ages with interrupted reigns. One of the Henrys and one of the Edwards, I think. They’re still tripping me up—the specifics, I mean. I can wrangle them into their spots in the list. And I’m darn proud that I can keep all those Georges and Edwards and Henrys straight—even the one with long strings of names, since Memrise insists I use every doggone one of them. Edward VIII, Edward Albert Christian George Andrew Patrick David, even! (Edward Always Chases Girls And Parties Down—sorry, Ed, I know it isn’t very dignified but it works. Could be worse: think of poor Left-Leg Louie, aka King George I, George Louis. See him up there in the picture, with his left leg forward? The unfortunate nickname was someone else’s mem, and it worked.)

We’ve nailed the U.S. Presidents, too. We could sing them in order already—well, except for the bunch around Rutherford B. Hayes where we always got tripped up—thanks to an old (very old) Singin’ Smart cassette. (Cassette! That’s how old!) But now we’ve pegged them to dates. Ulysses S. Grant did not take the summer of ’69 for GRANTed. During James K. Polk’s term (1845-1849) the country POLKa’d its way to California just in time for the Gold Rush. The louder it makes you groan, the more likely you are to remember it.

Rose scoffs at mnemonics and just plain memorizes. Not I. I gotta have a hook. Richard I and Richard II both had reigns that closed out a century, did you know that? 1199 and 1399 respectively. Charles I (the Merry Monarch) and George III began their reigns in 1660 and 1760, and somehow that link makes them both easier for me to remember. William Henry Harrison died in office in 1841; James A. Garfield ditto in 1881. Another peg.

As always happens when you set “separate” chunks of history side by side, surprises hit you. I had never put it together that Teddy Roosevelt became President the year Queen Victoria died! His two terms align almost exactly with the reign of King Edward VII: you know, the Edwardian era. This is one of those connections I should have made earlier, and probably did make a time or two, glancingly, somewhere along the line, but I can’t say it really stuck. When I’m reading the Betsy-Tacy books (set during that very decade; Betsy graduates from high school in 1910, I think) I’m not thinking about who’s on the throne over in England. Nor, when watching Upstairs, Downstairs (in which, if I recall correctly, a whole episode revolved around the death of the King), was I picturing Theodore Roosevelt gallivanting around the U.S. creating National Parks.  Connections are everything in education, and here’s one I hadn’t made until now. Teddy and Eddie. Got it.

I meant to make a list of all the books I’ve seen people reading, and books I’ve read aloud. Failed again. Missed some good ones, too! As for me, I read the first big chunk of The Goldfinch and found it so thoroughly harrowing I had to put it down for a little while. At this rate, it might take me the whole summer.

Literature of the English Country House has begun! I’m behind already! That’s quite all right!