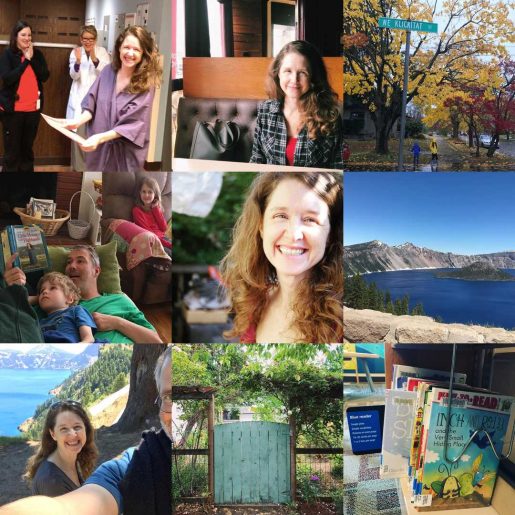 Sidebar: stripped down and ready for a new year’s booklist

Rose Cottage: on the nightstand

Finn Family Moomintroll issue of the Arrow: wending its way to subscribers tomorrow 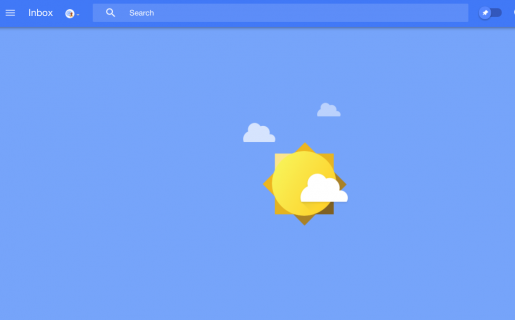 Yesterday was all about tying up the loose ends of my reading life in order to start the year with a clean slate. I looked over everything I’m in the middle of—so many books!—and decided, after some reflection, to take Penny’s advice from the comments and dive into the old favorites calling my name in that stack, or some very like them. Ever since I read Thornyhold, I’ve been hankering after The Scent of Water and Wise Child. And Lesley mentioned Miss Read…and I happened upon a description of Mary Stewart’s Rose Cottage that sounds even more enchanting than her Thornyhold. Impatiently waiting for the library copy to arrive…

(It occurs to me Thornyhold also has something of the flavor of Linnets and Valerians, which I’ve not reread in a few years…)

Anyway! That was yesterday’s Old Year Week work. Today I turned my sights to correspondence and (gulp) answered emails dating as far back as 2016. Mortifying but true. Snail mail correspondence is next, and feels like a luxury, not a chore. I’m still working this week, but at greatly reduced hours, and, well, after the year I’ve had, that feels like heaven.

It’s funny—I woke up this morning thinking: Right. I’m going to grant myself amnesty at the end of the year. Anything (non work-related, and work includes my Patreon) hanging unfinished—email, DMs, comment replies, reading plans, household chores, book reviews—all of it gets swept away at midnight on New Year’s Eve, and I will start afresh. And then immediately upon having cut myself this break, I began answering messages I should have replied to (wanted to reply to!) more than a year ago. By noon, I was all caught up. Why did I let it pile up in the first place? Answering was a pleasure—as soon as I gave myself permission not to.

Tomorrow I want to spend some time making High Tide plans for January. I’ll try to share those here. I say try to because I’ve learned not to make promises unless absolutely necessary. Curve balls happen and then I feel guilty. 🙂 But I miss, miss, miss this poor old blog and I’m trying (trying!) to restore some lost habits.

Related to that, I’ve been (again! perpetually!) pondering what, if any, changes I want to make in my social media habits this year. I visit Twitter maybe once a day now, almost out of a sense of obligation: I follow smart thinkers and feel a duty to check in on the day’s social and political commentary. But I can only manage it in small doses. I went almost totally silent on Facebook this fall…popping in occasionally when that same sense of duty propelled me to activism. Which I know is the opposite approach of many (most) of my friends, who have resolved not to bring activism or politics to Facebook. Sometimes my conscience says: you have to talk about this, so I try (try!) to listen. But I logged out of FB on my phone and tucked the app into a folder where it isn’t staring me in the face. I deleted all the games off my phone and unsubscribed from all but a handful of merchant newsletters. The few I kept are for small shops whose owners write thoughtful articles instead of spamming you with sale ads. ::shudder:: Ads bring out the Grinch in me: Oh the noise, noise, noise, noise!

Instagram remains a pleasant haven, a place to smile over friends’ family photos and adventures, and to enjoy glimpses of charming artwork or people’s book piles. Wisteria and Sunshine is a nourishing virtual retreat, like visiting Thornyhold or Juniper’s cottage; and there’s a small creative community I’m part of that is a daily delight. Mostly, though, I’ve wandered away from community discourse…which isn’t very like me, but I’ve had so much work on my plate, and I think I needed some breathing-in time. I’m feeling the wind change, though. I love turning the page to a new year. Always have. 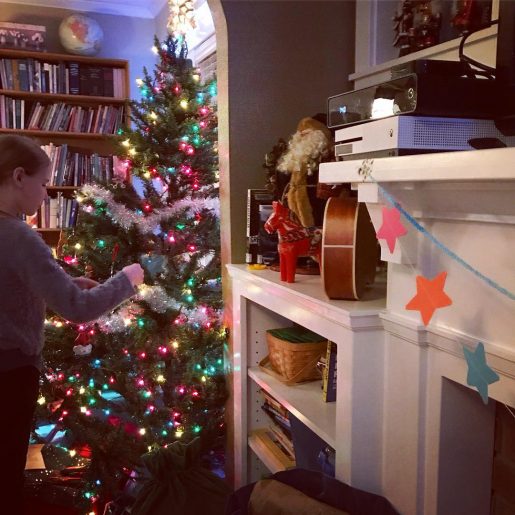 Year after year, this may be my favorite week for blogging. “Old Year Week,” as Mole calls it. I love tidying things up and making a fresh start. It’s a time, too, for reflection: what worked this year; what didn’t. I wasn’t able to be as consistent with daily posting as I’d hoped at the start of the year, but who could have predicted what this year would hold for me, for all of us. Methinks I can cut myself a little bit of slack. 😉

I worked on my sidebar booklog for a while yesterday—it was woefully behind—and discovered to my horror that I had written “Douglas Adams” as the author of Watership Down, which would have been a verrrry different kind of book. I’m going to hope it’s a case of nobody noticing, rather than that you were all too polite to point it out. 😉

Most years, this is the week that my fall Cybils reading frenzy is suddenly, breathlessly, over—finalists selected, blurbs written, book towers carted off to other parts of the house. That’s the case today for my Round 1 panelists, but this year I’m YA category chair only, not one of the YA readers. (I’m a Round 2 judge in Early Readers and Chapter Books, but that work doesn’t start until the New Year, and instead of reading 70-some YA novels in two months as in years past, I’ll only be reading the short lists of finalists. Big difference.)

Anyway, most years right around this date, I find myself suddenly at liberty to read (gasp) anything I want. It’s a tremendous feeling. This year I have a list of books begun earlier in the year, which I’d like to finish up but probably won’t. 2017 was for me a year of leaning on old friends—Hanff, Nesbit, Byatt, Montgomery, Tey, and (ahem) RICHARD Adams—and cozy mysteries during and after the months of my cancer treatment. And a steady course of Moomintrolls in our readaloud life. 🙂 No regrets whatsoever. But I do feel like stretching a bit and picking up something challenging or long-awaited. I also have a few last Arrow books to finish up: a delicious sort of work, that.

I’m not making new reading goals yet. I did make a little shelf for myself, in much the same way that I like to assemble enticing collections of readalouds and read-alones for my kids. It’s partly a real shelf (I’ve been in a hard-copy mood more and more often, lately) and partly virtual—a pile of tomes I’ve been carting around on my Kindle for ages. 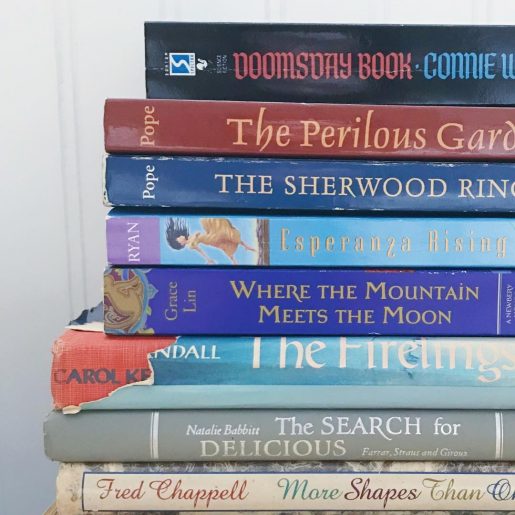 A different stack entirely: old favorites I pulled out one day to discuss on a video for my Patreon, but never did. Hmm…now I want to reread The Firelings. And The Sherwood Ring. And The Gammage Cup, which isn’t even in the pile. Oh dear, is there no end to my book gluttony?

This post ran off in a different direction than I intended when I began. I’ll save the other train of thought for later. Until then, I hope Old Year Week brings you some peaceful down time in which to indulge your own bookish whims.

Thornyhold by Mary Stewart. Who was it who just mentioned this lovely novel somewhere? Lesley, was it you? It certainly has a Wild Simplicity flavor…Gilly’s lonely childhood and her godmother’s store of nature lore and mystery put me in mind of Wise Child, which is praise of the highest order. I’m only a few chapters in; Gilly (now in her twenties) has just arrived at the old house in the woods that is to be hers. I’ve not even set foot through the door yet.

“A good house, deep in the woods, with a garden all around it and a river flowing past it. Fruit trees, and flowers planted for the bees. A place to grow my herbs. Silence in winter, and in summer nothing but the birds…”

See what I mean? You might expect Juniper to come round the corner of the house at any minute. Also it’s impossible not to hear in that passage an echo of my favorite poem. Geillis’s house might not be of clay and wattles made, but certainly midnight’s all a glimmer there,

…and noon a purple glow,
And evening full of the linnet’s wings.

Have to dash off to Salem for the day. One day, peace may come dropping slow into my life, but this is not that day. 😉

Heads up: Madeleine L’Engle’s The Irrational Season is $1.99 on Kindle right now. This is the only one of her Crosswicks Journals I haven’t read yet. A Circle of Quiet is one of my ’Portant Books (to adapt a long-ago Beanism). 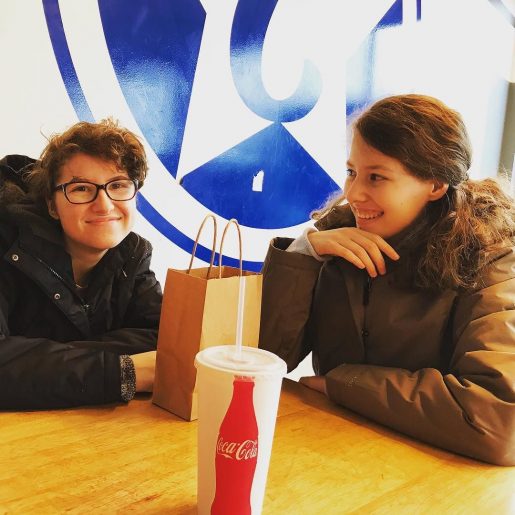 On Saturday we went to a pop-up sale for one of our favorite artists, Lisa Congdon. You’ve heard me rave about her Creativebug classes and her art, which makes me happy. She was selling items from her Etsy shop at Collage, that store with the giant wall of washi tape. I ventured out in the rain with four of the kids to do some Christmas shopping at Lisa’s sale. 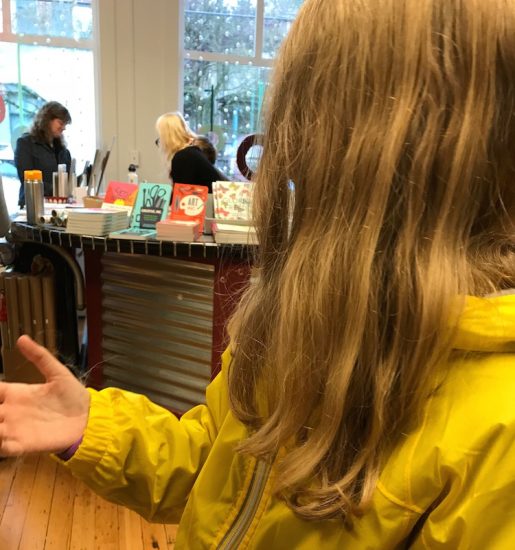 Rilla, who has taken several of Lisa’s Creativebug classes* with me, was so excited to meet her. Wish I’d gotten a better picture! She also made a furry friend. Equal levels of excitement, I would say. 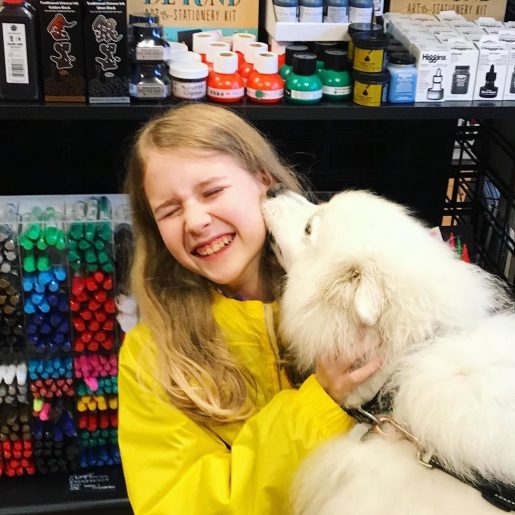 Afterward we did some window shopping on Alberta Ave. and then inhaled some truffle fries at Big Little Burger while we wait for Scott and Huck to pick us up. Rose and Beanie hung around for root beer floats and more window shopping. A birthday present or two may have been acquired. ’Tis that season, too, for us. 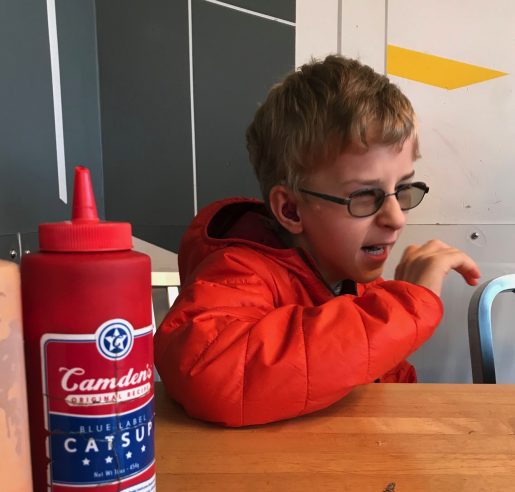