Archive for the ‘Breadmaking’ Category

People are sharing some good tips about the artisan-bread-in-five baking in the comments. I especially like the tip about doing the rising and baking steps on parchment instead of using cornmeal on a bread peel. (Or cookie sheet, in my case.)

I’m getting the hang of this. We haven’t bought bread in two weeks! 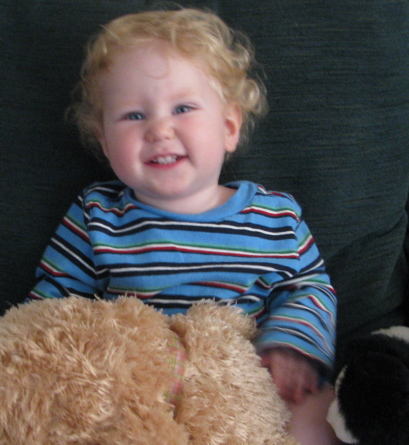 I know, I know, another bread post! They’ll taper off soon, I’m sure, or morph into notes on the other blog. But since breadmaking was the dominant theme of our week, I want to wrap up the week with my notes.

I can see the 100% Whole Wheat Sandwich Bread recipe being our go-to bread for daily use: it has been delicious as toast and sammiches—when we managed to save some instead of devouring it hot from the oven. I’ve been cutting the salt way down and the flavor is perfect. Our whole wheat comes out moist and dense, almost cakelike. Which is to say: perfect. I like an airier crumb for things like rye and sourdough, but for whole wheat I prefer it quite dense.

I am consistently getting one less loaf out of a batch than the recipe says I should. I don’t think that’s because I’m making my loaves bigger than I ought—I’m baking the whole wheat in a standard size loaf pan and using the amount of dough the recipe suggests. Weird.

I mixed up a batch of the brioche dough this morning to try as cinnamon rolls tomorrow. I will probably freeze the rest in one-pound batches, as suggested.

If you’re itching to give the method a try, the authors have generously shared some recipes on the Artisan Bread in Five Minutes a Day website. Here’s the Basic Master Recipe (with a photo walk-through).

Here’s a whole wheat brioche from their second book.

I really liked this older post from the blog of Zoë François, one of the two authors of ABin5. She answers loads of questions in the comments about specific problems people are having with their baking—kind of like “Car Talk” for bread. Actually, many of the posts on her blog and the main ABin5 blog are like that—excellent advice in the comments.

Our week in bread:

Monday—Scott gave me the book.

Wednesday—Mixed up the 100% whole wheat recipe for the next day’s baking.

Thursday—It was to die for.

Today—turkey and Swiss on whole wheat for lunch; brioche dough in fridge.

Next batch of dough: I gotta try that olive oil bread for pizza crust. My friend Joann was tantalizing me with her posts yesterday; her family is “roadschooling,” traveling the country in an RV. They bought the ABin5 book for their Kindle this week and have made focaccia, bagels, and cinnamon rolls so far. In the RV. How cool is that?

Yeah, We Could Live on This

Boy howdy. That whole wheat sandwich bread recipe. It’s like one foot in heaven. After we inhaled the first loaf, I noticed chalk grafitti on the side-yard fence:

That about sums it up.

How Rose Is Feeling

…about this whole bread thing.

Today’s notes so far: Our Henry’s is closed for remodeling! I had no idea. Totally threw off my plans. No rye flour at the big supermarket, so today we went with the whole wheat sandwich bread recipe, which I was eager to try anyway. Has honey & oil, so: rich and sweet? Yum? The dough is rising now. Might bake a loaf this afternoon to eat with dinner, or may wait until tomorrow morning. We polished off the last of yesterday’s baking at lunch.

Midafternoon update: Aha! I think yesterday’s yeast must have been old. Or my water was a tad too hot (I was worried about that) and zapped some of the yeast. Because today, using a new jar of yeast, WOW. This batch of dough (a different recipe) has risen considerably higher than yesterday’s, and is indeed filling a 5-quart container.